It was a night Kevin Bradley says he will "never, ever forget".

On an evening in May, Kevin Bradley was conducting a routine check on the bilbies that live inside a fenced-off part of Currawinya National Park, in south-west Queensland, when he saw movement in the distance.

It was something that, in more than 20 years of bilby conservation work, he had never seen.

"I saw this little animal skipping along the side of the road," Mr Bradley said.

"I couldn't believe my eyes.

"[I] was positive that I was imagining things or hallucinating through sleep-deprivation or something, then knew, of course, what it was."

It was a bilby.

No bilbies had been spotted in the wild on the park, on Budjiti country near the NSW border, about 830km west of Brisbane, since the 1950s. DNA samples from this wild bilby will be examined to see if she came from within the Currawinya fence.(Supplied: Cassandra Arkinstall)'My skin was on fire'

Mr Bradley is the CEO of the Save the Bilby Fund.

The charity breeds bilbies, which are endangered in Queensland, in captivity and then releases them into a 25-square-kilometre fenced enclosure on Currawinya.

The enclosure has been free of feral cats since 2018.

In 2019, they released six captive-bred bilbies into the fence's confines. This wild bilby was spotted outside the fenced area of Currawinya National Park.(Supplied: Cassandra Arkinstall)

Despite a life dedicated to saving the tiny, long-haired marsupial, Mr Bradley had never seen one in the wild.

"It was pretty incredible," he said.

"My skin was on fire and I was beside myself with excitement."

Cassandra Arkinstall was on the monitoring trip in May.

"It's all a bit of a dream," the Save the Bilby Fund volunteer and PhD candidate said. "Kev came out pretty early and told me what he'd seen. It was kind of just unbelievable."

The pair piled into a car and went back to the area where Mr Bradley spotted the bilby.

"Just seeing those tracks on the side of the road was really surreal," Ms Arkinstall said.

"We started to wonder, well, where else are they? And where did that one come from?" 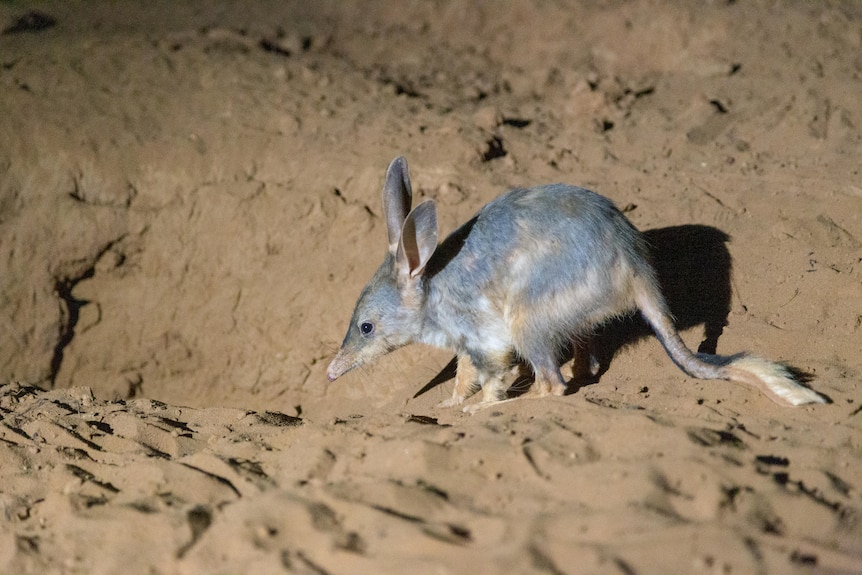 A bilby in Currawinya National Park makes its way to its burrow.(Supplied: Cassandra Arkinstall)'Safe to say there's at least a couple'

The duo took to the skies in a helicopter, scouting for signs of more bilby burrows and tracks on the outside of the fence.

"We found a couple of locations where there were some decent bilby signs, so some recently used burrows, feed scrapes and bilby scats," Ms Arkinstall said.

They trapped an active-looking burrow and caught a female bilby, that Ms Arkinstall took an ear tissue sample from.

Space to play or pause, M to mute, left and right arrows to seek, up and down arrows for volume.WatchDuration: 41 seconds41s A captive-bred bilby is released within the fenced enclosure at Currawinya.(Supplied: Cassandra Arkinstall)

It will be tested against genetic material from the released and wild-born bilbies inside the fence, to determine if she is related to them.

Due to different territorial behaviour between male and female bilbies, and the distance between where Mr Bradley first spotted his bilby and where Ms Arkinstall trapped hers, the pair are confident they are different individuals.

"I think it's safe to say there's at least a couple," Ms Arkinstall said.

The expanding bilby population inside the fence, which has grown 33-fold in three years, is one possible explanation for how that initial bilby ended up on the outside.

A scrap between the animals — a "bilby Fight Club," Ms Arkinstall laughed — is another.

"If, for instance, there was a colony of bilbies right up close to the fence, it is possible that a bilby was pressured out and that might have been the kick that it needed just to get it up and over the fence," Ms Arkinstall said. The Save the Bilby Fund believes there are multiple bilbies living in the wild outside Currawinya's fenced enclosure.(Supplied: Cassandra Arkinstall)'The game begins'

The Save the Bilby Fund has been working towards re-establishing a wild bilby population on Currawinya, outside the confines of the fence, but it seems the bilbies inside the fence wanted to speed up that timeline. "It's maybe a little sooner than planned," Ms Arkinstall said, "but I think that's a good thing in a way".

The Save the Bilby Fund is now ramping up its plan to try and eradicate the bilby's number one enemy, the feral cat, from outside the Currawinya enclosure as well.

"We've known for a long time now that we can keep bilbies behind fences and safe, but that's not a practical solution to getting bilbies back into the landscape," Mr Bradley said.