Les Whittle never intended to be notching up a 20th walk on Tasmania's iconic Overland Track.

In fact, after his first time on the remote track in the early 1970s he said he would never do it again.

"Who would ever want to do something like this?" Mr Whittle thought, at the end of the walk.

After a 40-year hiatus he did the walk again, and says that "the bug got him".

"I did a couple just to be with friends and family and now I find I'm enjoying it.

"There's a challenge in starting at one end and coming out at a very different spot in Tasmania." In late January, the 72-year-old former counsellor will set out for the 20th time on the 65-kilometre track that starts at Cradle Mountain and weaves through some of Tasmania's tallest mountains.

The walk takes four to six days, with walkers basing themselves at a series of huts for the night.

Mr Whittle has done the walk with his children, colleagues and walkers he has met on the track in the past and kept in touch with.

"I've been invited to do this next walk with a couple of people I met on the track 12 months ago," he says.

"They planned to do it and they said, 'We met this old guy called Les and he was good company. We'll invite him to join us'." 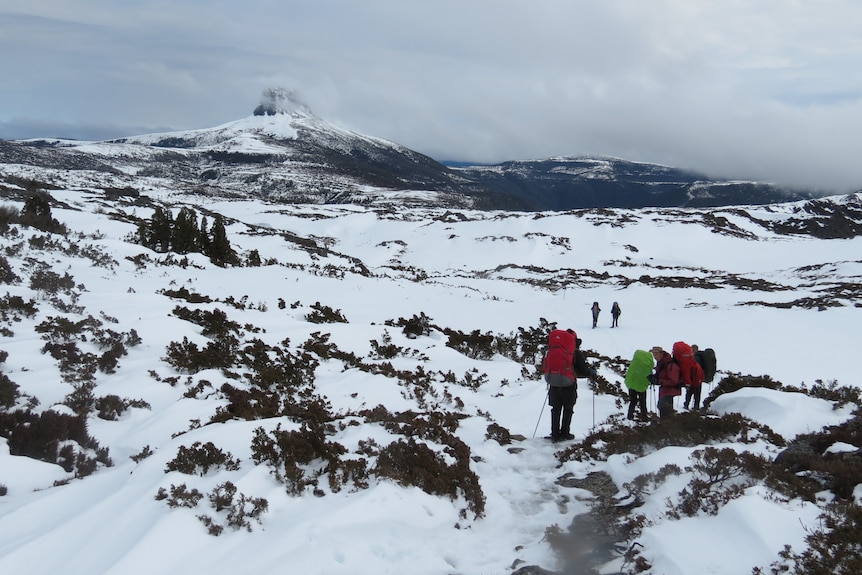 The conditions can be challenging.(Supplied: Les Whittle)

Mr Whittle walked the Overland Track three times in 2021 and has been doing it at least twice a year for the past five years.

His daughter, Jessie, says she thinks her dad is a "little nuts".

"I just love seeing people do what they love and pursuing their passion and for Dad that's the Overland Track."

Ms Whittle shares his passion for the outdoors, but she likes to enjoy it by running and is planning to run the track in early 2023.

"We're both getting the joy of being out in nature, but we get it in different ways with Dad taking his sweet time and me flying through in 10 hours," she says.

"It's a different journey to the same end." Mr Whittle recently walked the track by himself for the first time.

"I pushed it and did longer days and skipped a few huts and I was able to do it in just over three days," he says.

It meant walking up to 24 kilometres a day. Les recently did the walk solo, and says he felt good after it.(Supplied: Les Whittle)'You shall not pass'

Mr Whittle has been called Gandalf on more than one occasion while on the track and says the Lord of the Rings nickname may have more meaning than just his white beard.

"We'll go with the beard, but sometimes they pretend that I'm old," he says.

"I'm meant to actually be smarter and wiser than I am." One of his quirks while on the walk is dressing up at the halfway mark, which for most people is New Pelion Hut.

"It's a bit like a passenger liner crossing the equator and celebrating. I reckon crossing the halfway mark of the Overland Track should be celebrated," he says.

"So I'll take something crazy like wear a tie or take a Christmas pudding for a treat and get dressed up for the evening meal.

"Some people have said, 'Hey, there's an old man in there and he's got a beard and he's wearing a tie'."

Mr Whittle says the tradition has caused embarrassment for his family when they have joined him on the walk.

While it's hard to pack food for a six-day walk, Mr Whittle has got his menu down pat.

"I'm getting better at cooking good food on the way," he says.

"The signature dish in more recent times is the sweets for after the main course. Mr Whittle says the scenery on the Overland Track is always changing.

"In late spring the array of flowers is just amazing. It's staggering what we have up in our alpine areas," he says.

"In September, October and November you can still be hit by good amounts of snow.

"On one occasion I've gone through when the temperature was well over 30 degrees at the halfway mark and two days later there was 4 centimetres of snow across the track." There are a range of seasons on the track, including snake season.(Supplied: Les Whittle)

He says his favourite spot is just after Pelion Gap — the track's highest point.

"The walk down to the next hut is an open expanse of beautiful, ancient, alpine forest," he says.

"One could almost imagine if we were going to do a Jurassic Park [movie] that would be the place.

"The native flowers can be intoxicating." Doing the Overland Track requires a lot of preparation and booking through the Tasmanian Parks and Wildlife Service.

"It's good to have some experience and practice, and it's really good to talk with people who have done it before," Mr Whittle says.

"Exploit the wisdom of those who have gone through." While on the track he's witnessed helicopter rescues.

"It does happen; people will have an accident or an illness or they fall over," he says.

"When I'm going through with other people on the Overland Track, I want to know that they know first aid and the signs and symptoms of hyperthermia.

"It's a wonderful challenge but can be dangerous."