‘We gave it everything’: Black Jack takes out line honours in retirement-strewn Sydney to Hobart

Supermaxi Black Jack has taken out line honours in the 2021 Sydney to Hobart yacht race, in an incident-packed event.

The Mark Bradford-skippered, Monaco-flagged yacht crossed the line after 2 days, 12 hours, and 37 minutes, arriving just after 1:30am AEDT.

It was the slowest line honours time since 2004.

Black Jack held and extended its lead over LawConnect and SHK Scallywag in the final hours of racing but up until then it was a three-way tussle.

Bradford said he and yacht owner Peter Harburg had been working on the win for 14 years.

"We'll both be in tears at any time," Harburg said.

"It is very, very emotional … for me it's the first time I've been involved in the winning team. Mark has done it before but it's very special.

"We came to win, we can win the race. So yeah, we gave it everything."

Bradford said the first 30 hours of the race were "tough" but he knew straight away that they would have a good race.

"Pretty much after the start gun went, we had a pretty good feeling," he said.

"It's a long race and we had a tough race. "We had a couple of minor things went wrong but this is a professional sailing team and this is a well-prepared boat."

Bradford said getting through the first night was a combination of good luck, good management and a good boat.

"These are really complicated boats and it's hard to keep on the water … the preparation, the time that we put into this project really shines through in those conditions," he said. Black Jack crossed the finish at Hobart in the early hours of the morning.(ABC News: Luke Bowden)

The skipper spent the first 20 hours below deck.

"I just had internal problems, mostly my stomach was coming out of my mouth," he said.

"Maybe it's in my DNA. But yeah, certainly I'll put it down to the conditions today." He praised the efforts of rivals.

"With both the other boats, we dropped Scallywag near the end for a bit but she came back and then LawConnect was right there the whole way.

"They [LawConnect] led us for a bit, then we clawed it back at the end."

LawConnect finished less than three hours later with a time of 2 days, 15 hours and 11 minutes. It was Black Jack's 14th attempt at the Sydney to Hobart.(ABC News: Luke Bowden)LawConnect hit by computer woes

"The first night was pretty tough we had a few issues, but we got through it," he said.

"We actually didn't know where we were because our computer got wet so we did the majority of the race not knowing whether we were in the lead or not." LawConnect skipper Ty Oxley says one of the sailors is an IT expert and helped out when the computer broke down.(ABC News: Luke Bowden)

One crew member who is not a professional sailor was able to help with the computer problems.

"One of them is an IT genius he works in the IT team, so when our computer went down we were able to reconfigure some networks and get back online," he said.

"Second day it got pretty light [wind], and it's pretty tough in this old girl, so against some of the lighter boats … but it is what it is.

"We got through but it was pretty tough the last 24 hours."

Oxley is now taking the boat straight back to Sydney.

"My goal is to be back in Sydney by New Year's Eve as we have a function on the boat … makes me crazy or stupid, I don't know which one," he laughed.

Skipper of third-placed Scallywag, David Witt, said the crew was disappointed after a tough race but were happy to make it to Hobart at all.

"The crew did an amazing job, we probably don't deserve to have a 100-footer here in the condition the boat ended up in the first night so it was a credit to the team that the boat got here," he said.

"We broke the J2 tack coming out of the harbour, and then we broke it again. The two times cost us about 20 miles. 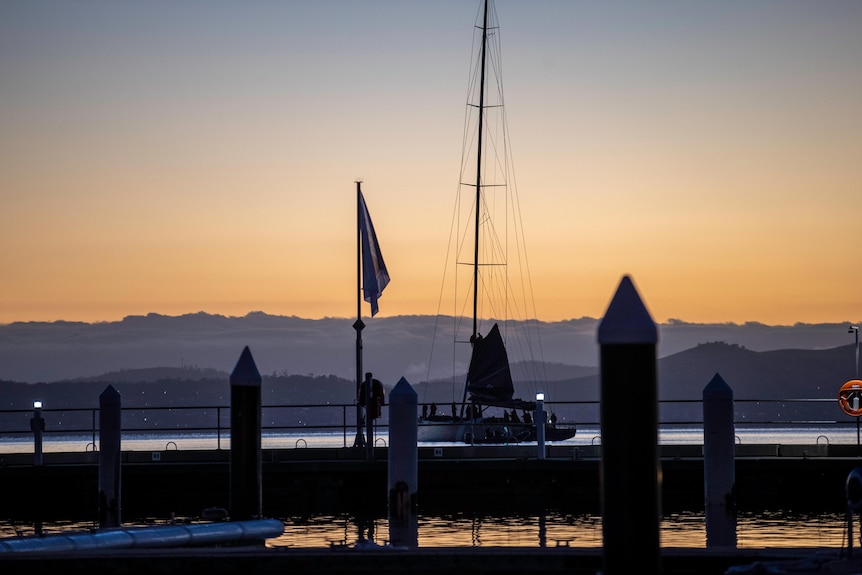 SHK Scallywag was third across the line.(ABC News: Luke Bowden)

"Then we lost all electronics and then we sailed three quarters of the race with no instruments at all on a 100 footer so that's a pretty difficult thing to do.

"The boat was fast enough this time but we just couldn't keep it together.

"Scallywags never give up and to win you first have to finish, so we finished, we just didn't win."

Witt said coronavirus had affected the preparations for the Hong Kong team and on a personal level he and his wife had almost died from COVID this year after catching the disease while stuck in the Philippines for 10 months.

The race fleet took a battering on the first day, with dozens of teams forced to retire due to sail and rigging damage, with one crew member injured on the New South Wales yacht Zen.

One skipper who pulled into Eden said he was gutted after hitting "something hard" in the water and damaging the hull.

As of this morning, 36 yachts had retired, the largest number since 2015 when 25 of 84 starting yachts failed to finish.

COVID has also played havoc after forcing the cancellation of last year's race and constant testing of competitors this year. In the tiny community of Coasters Retreat in Sydney sits a little house on top of a hill. It's where the Sydney to Hobart race was born.

"COVID has been a real feature of this whole campaign for everyone and I think it's great that the CYCA [Cruising Yacht Club of Australia] could get this race away," winning skipper Mark Bradford said.

"We're probably the most COVID-tested people in yachting. We've been going hard for a month now."

The battle for line honours had become a battle between Black Jack, LawConnect and SHK Scallywag, with the three supermaxis making it through difficult conditions before entering Bass Strait.

Black Jack previously claimed line honours in the Bluewater Classic in 2009 under the name Alfa Romeo. It finished fifth in the last Sydney to Hobart in 2019 and was second to Wild Oats XI by just 28 minutes in the 2018 thriller.

Black Jack navigator Alex Nolan told media early on Tuesday that the crew had decided to sail outside the rhumb line, the line on the course representing the shortest distance, and were "pushing it hard".

The focus now shifts to the overall winner — the Tattersall Cup — a handicap prize determined by a number of factors including the size and weight of the competing craft.