“We evacuated Anya’s mother, a neighbor died at the car”: a report from Rubizhne

Special correspondent in Luhansk took part in the rescue operation

The editorial office of Moskovsky Komsomolets received a letter from a girl named Anna. That's what she called it: “A Cry for Help.” The girl begged for help to evacuate her mother to a safe place from the city of Rubizhnoye. The MK special correspondent in Lugansk forwarded Anna's request to the People's Militia of the LPR and, together with her fighters, took part in the rescue operation. 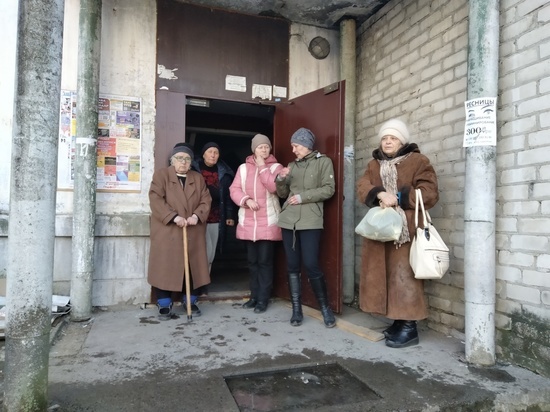 “Help me please. My mother, Polezhaeva Tatyana, lives at Rubezhnoye, st. Mendeleeva 27, second entrance. Now located in the basement of this house. She has an almost non-walking neighbor in her arms. There is no food or water at all. Sugar dropped, she began to walk badly. People are dying from dehydration, from the cold. If you have a mother, you will understand me. Mother's tears break the heart and soul! I beg you, please help! Maybe you will be able to transfer her coordinates to the military so that they can evacuate her to the Russian border. Russian mother was born in Novokuznetsk. I will be very grateful. Help, please, than you can. With respect, hope, and tears in the eyes. Anna”.

…The way from Lugansk to the long-suffering Rubizhne is not close: it takes about three hours by a good car. From the middle of the route, the road in its usual sense simply ceases to exist. Broken by military equipment and numerous attacks, it looks more like a rally track: you either fall into a hole or emerge from it.

I have already written about the fate of the inhabitants of Rubizhne, recaptured from the Armed Forces of Ukraine a few weeks ago. Since then, the situation has not fundamentally changed. As the townspeople themselves say, “there are days when they shoot hard, and sometimes – when they shoot very hard.” Despite the fact that the positions of the armed formations of Ukraine have long been driven out to the outskirts of the city, they continue their vile war against unarmed and helpless women and the elderly.

Under incessant volleys we drive up to the right house. A typical five-story building from the time of Soviet development, like all the houses in the area without exception, looks lifeless and lifeless: broken glass, holes – traces of shelling … As soon as we unloaded from the military “UAZ”, as a metal, with peeling paint in places, the door of the second entrance cautiously opened.

– Do you know Tatyana Polezhaeva? I turn to the woman.

– Yes, this is our neighbor – Tanya from the third floor.

The woman frantically opens the door, and we go down to the basement. A dark, damp-smelling, completely uninhabitable dungeon. For almost a month now, it has become a haven for these people. A man, trying to help, turns on a flashlight. A barely penetrating beam illuminates the little room, most of which is occupied by makeshift sleeping places. Because of the small space and the pile of bedspreads and rags, it seems that this is one huge bed. In the corner on the floor are plates, cups and other household utensils.

– Tanya, Tanya! the woman screams into the darkness of the room. – Tanya, they came for you! Lord, what happiness! This is your Anechka, probably asked …

An elderly woman in an old brown sheepskin coat and a knitted light hat appears out of the darkness. realizing that she is the same Tatyana Polezhaeva.

– Oh, you are so unexpected… – the pensioner begins to wail, losing her emotions. – I need to get ready. Maybe tomorrow… Oh, God, what am I talking about, what a tomorrow…

The woman begins to nervously shift some things from place to place. 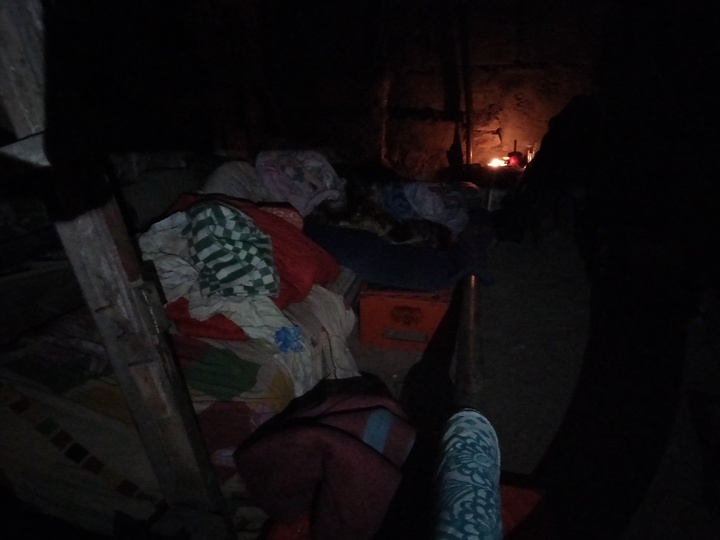 – My neighbor is lonely, sick, – Tatyana Astafieva, I look after her. How can I leave her?! – as if returning to reality, Tatyana reports.

I'm reassuring that we will take the neighbor too.

– Just get ready: the sooner we leave, the better.

Volleys shots, as confirmation of my words, make the audience duck.

While the pensioners are packing their things, the neighbors tell what they have experienced during these days. The shelling of the peaceful sector began even before the arrival of the People's Militia forces in the city. Ukrainian tanks dug in within the city and hit the houses.

– We still have a small dog, Busya, left … – mixing Russian words with Ukrainian, points to a toy terrier dog shaking with fear, one of residents of the entrance.

The woman said that the owner of the dog, 37-year-old Irina, died as a result of shelling by the Armed Forces of Ukraine on March 8.

– She was in the kitchen when the shell fell right near our house. A shrapnel pierced her lung. What a good girl she was, what a woe! the pensioner continues. She bought this dog for her son quite recently. Irochka died right before his eyes. He shouted like this: “Mommy, don't die!..” Then her sister came and took the boy away. And Busya ran away from fear somewhere, and then appeared. Now he lives with us…

The woman told a lot more that makes the heart go and that does not fit into the mind. And how the Ukrainian national battalions “for fun” fired at civilians with automatic bursts, and how the corpses were not allowed to be removed from the streets, shooting as soon as someone tried to approach them… 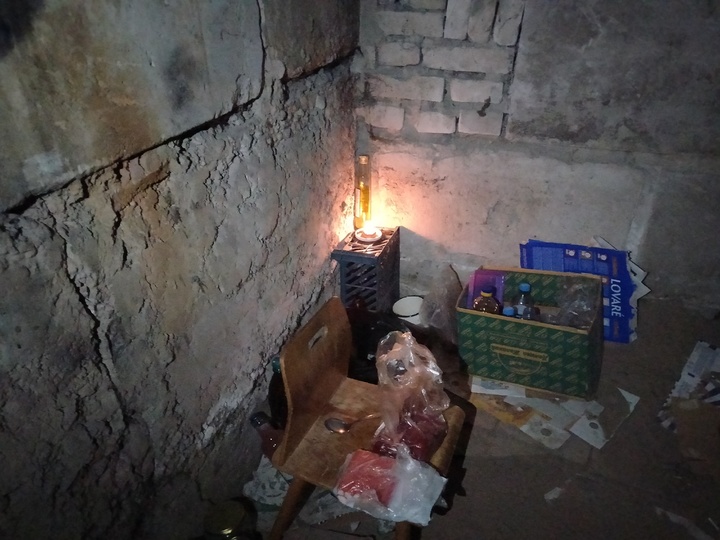 The Ukrainian authorities left the city in the very first hours, leaving people to their fate. Only the doctors of the city hospital remained at the post, but it’s almost impossible to get to them, even if you dare to get there yourself. “The ambulance is no longer running along Rubizhne. There is no police, no Ministry of Emergency Situations, no corpse trucks,” people complain.

“Three days ago, our children were killed by a shell. The boy was 10, and the girl was 8, – the woman continues the story. – That's fate! She and her mother came here as refugees, from Krasny Luch. Here they died. They had to be buried right in the yard. As soon as they buried them, no one saw their mother again. Chi is alive, chi is not – God alone knows, – the interlocutor shakes her head.

Animation is heard in the entrance – our evacuees have finally gathered and are ready to go. I pick up a gray plastic suitcase with a cracked lid from the hands of an elderly woman and hurry to the car. The military help load the rest of the belongings.

– Well, with God, with God, – the neighbor baptizes those who are leaving. – Tanya, the connection will improve, I'll call. Don't worry about the apartment, I'll take a look…

The number of seats does not match the number of passengers, so I had to make my way back in the trunk of the UAZ, on the same suitcases that we so cheerfully threw there. But if you sit comfortably, then, in general, it’s not as terrible as it might seem at first glance.

< p> Exhaled, only having entered Varvarovka. This is the next settlement after Rubizhne in the direction of Lugansk. Shells no longer arrive here, and civilians calmly go out into the street.

The refugee camp in Starobelsk is the end point of our journey. Here, all evacuees receive the necessary assistance, and only then the issue of further accommodation is decided. On the way, both women contacted their relatives from Russia, and they promised to come in a hurry to pick them up.

– Thank you very much for taking us out of this hell! – barely holding back tears, Tatyana turns to me. – Thanks to you, we took a breath of fresh air and hope that we will never return to this inferno…

The doctors took the pensioners to the ambulance, and before leaving we decided to walk around the camp. Already returning to the car, we suddenly saw some kind of bad fuss of medical workers not far from the same ambulance where our passengers had been taken earlier. From the worried faces of the doctors, it became clear that something had happened …

Polezhaeva's elderly neighbor Tatyana Astafieva, a pensioner we had just taken out from under shelling, was lying on the ground in front of the doctors bending over her. From her lifeless body and the sullen faces of the doctors, it was clear that nothing could be fixed. Grandmother's heart could not stand it…

Trouble. How strange this world is. A person could survive in a real hell, under incessant explosions, in cold, in perpetual fear, without food and water. Survive… and die when all this hell was left behind.