Western Australia's laws might be leading the way on banning single-use plastics, but for many businesses, they just cement what businesses have been practising already.

Under new rules that came into effect on January 1, a variety of single-use items were banned, including plastic straws and cutlery, as well as certain types of polystyrene containers.

But for Angie Kosse, who owns two cafes in Perth's south, the rules reflect what she has been doing for years.

"When we started changing about three, four years ago, it was more about reducing waste, reducing plastics, reducing everything," she said. Plastic straws were the first item to go, followed by cheaper plastic containers in the kitchen.

It was all part of an effort to reduce rubbish across her cafes, including the amount of food sent to landfill.

"I'm from Europe, we have been doing this for a very long time," she said.

"I remember growing up for us, recycling was a day-to-day thing because we had to do it.

"Coming to Australia, it was new to me that actually, people do not recycle here."

Now, she has switched to sustainable alternatives for everything she can.

Under the current stage of the plan, the following single-use plastic or disposable items are banned:

Polystyrene takeaway containers of a certain density have also been banned, although trays used for meat and seafood packaging are exempt.

The restrictions are already in effect, but the government said they won't be enforced until later this year, so businesses can use up current stock. From 1 January 2023, the following further single-use plastic or disposable items will also be banned:

The second stage will also ban oxo-degradable plastics, which are designed to more rapidly break up into fragments under certain conditions. Many types of takeaway coffee cups will be banned on January 1, 2023.(ABC News: Keane Bourke)

Environment Minister Reece Whitby said the government recognised many were already reducing their reliance on plastic.

"The community has shown overwhelming support for moves to reduce single-use plastics," he said.

"The time has come for us to back that sentiment up with action."

The next challenge: coffee cups and lids

Ms Kosse said while adjusting to the first stage of the ban had been relatively easy, finding suitable coffee cups and lids would take a bit longer.

"Because it's a hot beverage most of the time, so we have to make sure that it's safe and that it's closed," she said. Finding suitable alternatives to takeaway coffee cups could prove to be a challenge.(ABC News: Keane Bourke)

Her cafes currently use a sustainable alternative, but she was not sure if that would be allowed under the new rules.

"I think we can do better, so I believe that … reusable cups will be the goal," she said.

Ms Kosse also encouraged people not to use takeaway cups and containers if they were dining in.

"We've got all the equipment here to make sure everything is sanitised and clean," she said. Ms Kosse encourages people to use dishes provided by cafes if they are dining in.(ABC News: Keane Bourke)

"It costs us about 50 to 80 cents, or even sometimes a dollar depending on the container, on top of everything else, and it just goes in the bin."

In its annual plastics scorecard for 2021, the World Wildlife Fund (WWF) ranked Western Australia as the best in the country for reducing the use of single-use plastics.

In part, that is because the second stage of the ban will prohibit polystyrene cups and containers, as well as certain types of coffee cups and lids. 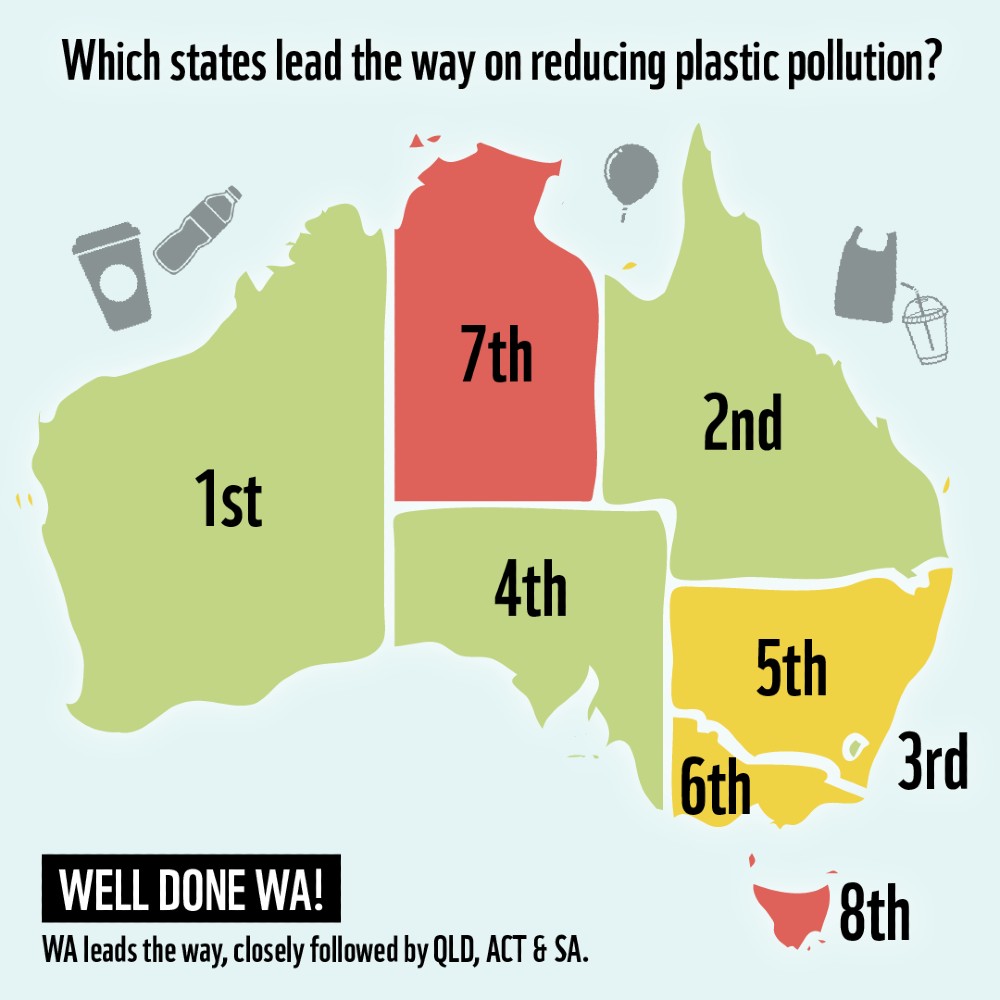 The World Wildlife Fund has praised WA for its action on reducing single-use plastics.(Supplied: WWF-Australia)

"We discard about a billion plastic coffee cups in Australia every year and many of these end up in landfill or our oceans where they can do damage for hundreds of years," WWF-Australia's Kate Noble said.

"Australia has to tackle this needless mountain of waste, so we hope WA's commitment will inspire other states to take action."

Queensland, the ACT and South Australia were placed just behind Western Australia, WWF-Australia said, because each government was working towards banning plastic plates, cutlery, straws and polystyrene containers.

The WWF rated the Northern Territory and Tasmania as the worst performing jurisdictions in the country.

'It's going to make a really big impact'

In 2011, Rebecca Prince-Ruiz founded the global Plastic Free July movement to try and encourage people to reduce their plastic waste.

She has been part of the group that helped formulate the current rules, and said she was proud WA was leading the nation.

"These items are commonly found as litter in our parks, on our streets, and we know that they end up in the marine environment," she said.

"It's really critical that we make this small choice and take this step because it's going to make a big difference." Ms Prince-Ruiz hoped the ban would encourage people to think about the single-use items they use, and whether they even need to be replaced with alternatives.

"Some items like plastic stirrers, we don't need them," she said.

"There's a real opportunity to reduce, there's also an opportunity to switch to reusable packaging so we're creating less waste overall and not just tackling the plastic litter issue."

One exception to the ban is that businesses will still be able to provide plastic straws on request to people who need them because of disability, or for other medical reasons.

The straws have to be kept out of view, but a person will not have to show any evidence they need a straw when they request one.

Pharmacies, local governments, and charities have also been given permission to provide straws, if they choose to. The CEO of People with Disabilities WA, Brendan Cullinan, said the exceptions were important because some sustainable alternatives weren't suited.

"Some of them aren't appropriate in the fact of they either retain heat or aren't flexible," he said.

"So therefore it is vital that people who still require the flexible straw items have access to those items."

Mr Cullinan was involved in the consultation process that shaped the current rules, and said he was pleased the government had allowed those exceptions.

"I think the key now is going to be the education campaign around that," he said.

"If businesses understand that these items are vital for people with disabilities and vulnerable people for their wellbeing, we are confident that businesses will still be able to provide these items."