Victoria plans to decriminalise all sex work within two years. Here’s what that means

Victoria is poised to decriminalise sex work within two years.

Many in the industry are anxiously waiting for the upper house to pass the bill, which they say will protect workers, reduce stigma and violence and have financial benefits.

But the state opposition is concerned about many of the changes, including the removal of offences for not having safe sex, while groups representing former sex workers say they have been ignored.

And with the bill before parliament again this year, debate looks set to continue both in and outside of the industry.

The current system has been labelled 'complex, costly an onerous'

Currently, the industry is regulated by Victoria's Sex Work Act 1994. It sets out stringent conditions on the conduct and practices of sex workers and brothels.

Independent sex workers must apply for permits, register themselves with the Business Licensing Authority, obtain permission from a landlord to work from home, adhere to regular screenings for sexually transmitted infections (STIs) and cannot work with more than one other person at any time.

Brothels must also obtain licences, are strictly prohibited from serving alcohol and must be located away from commercial and residential zones, often in industrial areas.

Street-based sex work is outlawed in Victoria and the advertising of sexual services is also subject to regulation.

In a discussion paper on decriminalisation, the government characterised the current sex work system as "complex, costly and onerous", leading to poor compliance and the growth of an unlicensed industry in Victoria.

As a result, the government set out a staggered two-phase period of decriminalisation.

The government has proposed a raft of changes in its effort to "maximise sex workers' safety, health, and human rights, while also reducing stigma and fear of criminal repercussions for sex workers".

It intends to completely repeal the licensing system which separates the industry into independent sex workers and brothels, instead regulating it through existing agencies such as WorkSafe Victoria and the Department of Health.

Offences related to mandatory STI testing would be repealed, with the government saying that "evidence indicates that sex workers have comparatively higher rates of compliance with safer sex practices and low rates of sexually transmitted infections than the general population".

Laws making it an offence for sex workers to work with an STI or to adopt unsafe sex practices would also be repealed.

Space to play or pause, M to mute, left and right arrows to seek, up and down arrows for volume.ListenDuration: 28 minutes 35 seconds28m 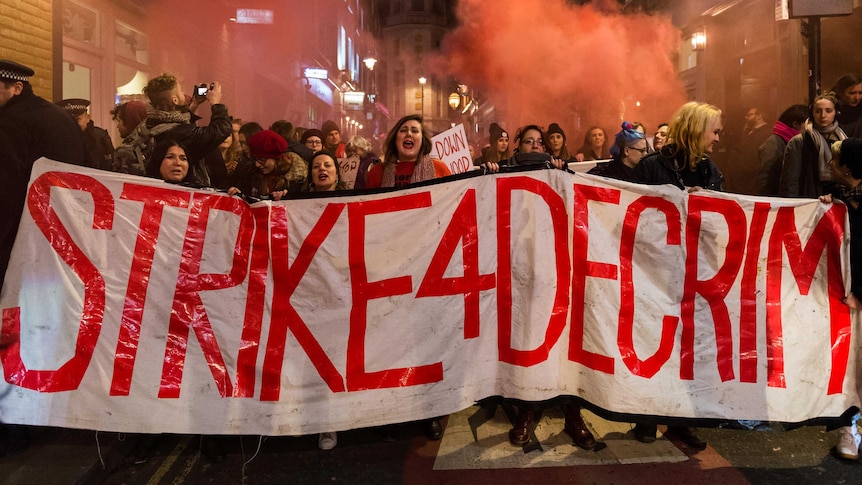 The full decriminalisation of sex work is on the cards in VictoriaDownload 39.3 MB

Brothels would be allowed to sell alcohol under changes to liquor licensing laws.

Zoning laws would be relaxed, opening up the sex industry to locations outside of industrial zones, while street-based sex work laws would also be amended to legalise it outside of exempted zones such as places of worship, schools and childcare centres.

The government has also proposed strengthening anti-discrimination protections for sex workers under the Equal Opportunity Act 2010, removing the current ability to deny accommodation to sex workers.

The changes are part of the Sex Work Decriminalisation Act 2021, which passed through the lower house. It was opposed by Coalition MPs, who argued the legislation was a "missed opportunity" that did not achieve its objectives of protecting women.

"Unfortunately, the Andrews Labor government has tried to ram through another piece of legislation without safeguards in place and without time for proper consultation and scrutiny," Shadow Minister for Consumer Affairs Roma Britnell said.

The opposition has raised particular concern about the removal of offences for not employing safe sex practices, and ambiguities regarding the allowance of sex work "near" exclusion zones.

Miss Britnell proposed amendments to the bill, calling for the release of a redacted and de-identified copy of the government's review into sex work, but the amendments were defeated.

If the bill passes through the upper house this year, the first measures would come into effect on March 1, and the remainder would follow on December 1 2023.

Spearheading the movement to decriminalise sex work is Ms Patten, a member of Victoria's upper house for the Northern Metropolitan electorate and a former sex worker.

Ms Patten said while Victoria had led the charge for progressive sex work laws in the 1980s, the state was now lagging behind. Ms Patten said sex work was work and needed to be treated as such regardless of personal beliefs.

"We're not making sex work compulsory. What we are saying is sex workers should be heard, should be listened to and should be part of the solution to making their lives and their livelihoods safer and better."

Ms Patten said sex work reforms should be viewed as "cutting red tape for small businesses", a perspective which she believes will be key in bringing the legislation past her more conservative colleagues.

While optimistic the reforms would gain more support, she said people fighting for complete decriminalisation would need to remain vigilant to prevent the movement from being derailed for political gain.

"There's always those fears. Of course this is politics, I'm certainly a realist in that regard," she said.

“I would be hopeful that we see this legislation go through and we see it go through with the minimum of grandstanding and moralising about this industry."

Groups against decriminalisation say 'survivors' have been excluded

But not everyone is happy with the way things are headed.

The Coalition Against Trafficking in Women Australia (CATWA) is opposed to all forms of sex work and is concerned the model being pursued in Victoria could make things less safe for workers.

CATWA spokesperson Tegan Larin said Ms Patten's 2019 appointment to the government review had robbed the process of objectivity and independence.

"We feel like she has a stake in decriminalising the sex industry, which she's been advocating for decades," Ms Larin said.

Ms Larin said CATWA worked with former sex workers who had left the industry and called themselves "survivors".

She said four separate sex work "survivor" organisations had been excluded from the government's consultation sessions, a decision she called "hugely disappointing" and one that added to concerns about the process of decriminalisation.

"This improper process, lack of public consultation, lack of transparency, exclusion of survivors and conflict of interest leads us to believe it's been rubber stamped, it was a done deal," she said. 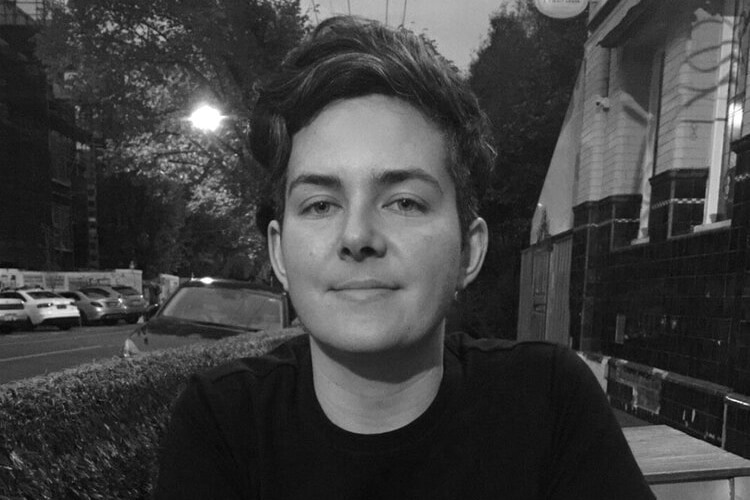 CATWA spokesperson Tegan Larin says jurisdictions such as NSW that have enacted decriminalisation have not shown improved outcomes for sex workers.(Supplied)

CATWA has submitted its concerns to the government over the new proposed model, which they say have been ignored.

The group proposed alternative models to the government, such as the controversial Nordic model which criminalises people who pay for sex work but does not punish those who provide sexual services.

Ms Larin said she feared allowing alcohol to be supplied in brothels would create a riskier environment for sex workers, saying intoxication could incite violence.

She said the changes to zoning would erode the checks and balances provided by a system with some oversight, and make it easier for business owners to take advantage of workers.

"What will it look like when a pimp is running a brothel out of a house and there are no checks and balances on that?" she asked.

"This legislation is like if you were to say to the sex industry, not sex workers, 'what is the best possible outcome for your industry to make it expand, to make it more profitable?' This is what they would write."

Ms Larin believes the Victorian government only listened to industry advocates and therefore failed to adequately capture the reality of the sex industry.

"Studies will continually show, most people in the sex industry want to leave, but they can't leave because they rely on it for money and there's no other option to survive," she said.

"When we hear women talking about how great decriminalisation is, these aren't … migrant women who are working day in, day out in massage parlours in Sydney and aren't allowed to leave."

Sex workers say the changes will give them legitimacy and safety

Sai Jaiden Lillith is a sex worker who supports decriminalisation, and submitted their experiences to the government during the consultation period.

"I'm looking forward to reducing the stigma and violence against sex workers by removing all the criminal aspects of the Sex Work Act," they said.

"[Decriminalisation means] protecting us from being blackmailed and outed and doxxed, it's going to legitimise our place in society in a really strong way."

Under current legislation, Sai is unable to work from home and feels at risk due the provisions in the Equal Opportunity Act 2010.

"Outing yourself to council for an application, which would probably be rejected anyway, is a risk the vast majority of sex workers including myself would not take," they said. Sai Jaiden Lillith says decriminalisation is long overdue and will only have positive outcomes both socially and financially.(Supplied)

As a result, Sai said they were put in a difficult position of transporting their work equipment for fetish services to different venues at an expense.

"It's really unfeasible to transport [the equipment] to a client's home or to a hotel. Hiring another place for me to use can take up to 50 per cent of the expenses of any given session."

Beyond the business impacts, Sai said the health and safety implications of decriminalisation would change lives.

"Licensing or criminalisation is only going to harm the most vulnerable in our community," they said.

As part of the licensing system, sex workers who do not wish to work independently like Sai must work in brothels.

Brothels are licensed venues which have met the zoning requirements and pay fees ranging into the tens of thousands of dollars to maintain their legality.

Sex industry, and gun shops are denied financial services. Should banks be the moral arbiter? Legally operating businesses in the sex, adult and firearms industries say they are being denied services from banks and other financial companies.

Heidi Olsen has been sex worker for around six years, both independently and in brothels, and said the brothel licensing system was also in dire need of reform to protect sex workers.

"There's a limited number of licensed brothels. Those licensed brothel owners do have a monopoly on the industry. That has really serious impacts for workers' rights in those establishments," she said.

When working privately, Ms Olsen said it was intimidating to go to a client’s home directly, with fears they may be filming secretly or there may be other people present.

Ms Olsen said sex workers were forced to make sacrifices in order to not break the law.

"There's always a trade-off under the licensing system. When I go to work in the brothel, I know I will earn less money but I have colleagues, I know there's always someone outside the door if something goes wrong," she said.

Ms Olsen believes decriminalisation will lead to more choice and more bargaining power for sex workers, which she said her peers in the industry agreed with.

The Sex Work Decriminalisation Bill 2021 currently sits with the state's upper house, which it must clear in order to become law.

For sex workers like Ms Olsen,  it will be an anxious waiting period.

"I do feel nervous about the public debate. Victoria is different to other states in Australia," she said.

"It's unique in the demographics of people who hate us. The level of violence and animosity from these groups is pretty intense."