Victoria has fewer COVID-19 cases than New South Wales, so why are more people dying?

If the pandemic has taught us anything, it's how quickly fortunes can change.

Less than a month ago, Victoria was recording more COVID-19 cases than New South Wales.

Now, weeks later, NSW is clocking more than three times as many active cases as its southern neighbour.

Much of that is due to the super-infectious Omicron variant that first began ripping through Sydney in November, and has since seen COVID-19 cases climb in most states.

But, despite a lower caseload, Victoria has suffered a greater human toll from COVID-19.

In the past week alone, more than 45 people have died with COVID-19 in Victoria, while in NSW that figure stands at around 30.

Comparing outbreaks between states can be incredibly difficult — ever-changing variables and inconsistencies with how and when data is recorded make it challenging to draw precise conclusions.

But, as Australia's strategy shifts from eliminating transmission to reducing severe illness and death, it's important to ask why more families in Victoria are losing loved ones to COVID-19 than in any other state.

What is behind the greater COVID-19 mortality rate in Victoria, and what can it tell us about the future of the Omicron outbreak?

Delta vs Omicron: The different variants Part of the answer lies in the proportion of variants in each community.

In recent months, Victoria has recorded higher proportions of the Delta variant compared to NSW, where cases have been dominated by Omicron.

Epidemiologist Tony Blakely from the University of Melbourne said the difference in the outbreak's make-up could be influencing how it is playing out in each state.

"If we get infected with Omicron, we've got something like a 70-odd per cent reduction in the chance of hospitalisation compared to Delta," Professor Blakely said.

"Even when you go to hospital, you're likely to be less severe than somebody with the Delta variant in hospital.

"So if one looks at the ICU numbers in New South Wales, about 10 per cent of the people in hospital … are in ICU, whereas that might have been 20 per cent with Delta." Since it can take a week or two from when a person becomes ill with COVID-19, to the time they are hospitalised or die, the higher level of Delta that circulated in Victoria weeks ago could still be contributing to deaths today.

"The deaths at the moment in Victoria are almost certainly more likely to be due to Delta than Omicron," Professor Blakely said.

"So that's the explanation for why the death rate is higher."

Read more about the Omicron variant:

But as Omicron becomes the dominant variant, Victoria is likely to see its proportion of severe cases and deaths go down.

Authorities suspect Omicron is now the dominant strain in Victoria, with 76 per cent of samples collected over the Christmas period linked to that variant.

Further testing in the coming weeks is set to confirm that figure.

"Once we get up to 80 or 90 per cent of our infections being Omicron, we will end up having a similar death rate to what's been observed in New South Wales at the moment," Professor Blakely said. 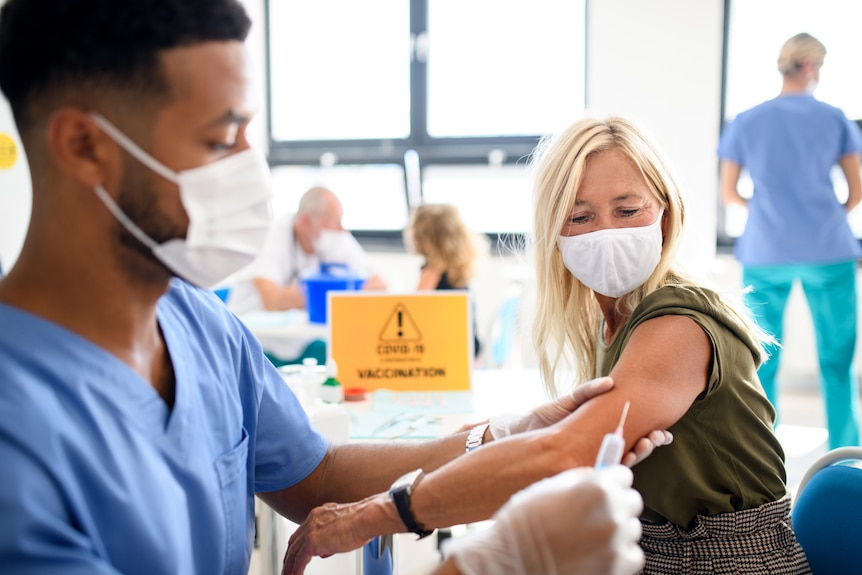 Vaccinations provide effective protection from severe illness, but the rise in infections from Omicron means more people will end up in hospital.(Shutterstock: Halfpoint)

Experts around the world are still investigating how effective current vaccines are against the Omicron variant.

The vaccines continue to offer protection against severe disease and death.

But early studies suggest they are less effective in stopping the spread of Omicron.

Victoria and New South Wales both had high vaccination rates of around 91 per cent of people aged 16 and over when the Omicron variant hit, helping reduce the number of people getting severe COVID-19.

But Victoria's vaccination rate is slightly behind that of NSW — at 92 per cent of people over the age of 16 fully vaccinated, compared to NSW's 93 per cent.

James Trauer, head of epidemiology modelling at Monash University, said that 1 per cent difference might be having a "minor effect" in Victoria's death rate. Professor James Trauer says Victoria has had some of the worst outcomes during the pandemic, and it's unclear why.(Supplied: James Trauer)

"It might not seem like much, but if you look at the proportion of the population who's not vaccinated, there's a bit of a difference between New South Wales and Victoria," Professor Trauer said.

"Even if you've got 95 versus 94 per cent vaccination coverage in New South Wales versus Victoria, that means 6 versus 5 per cent of the population not vaccinated, so that could be having, I think, a minor effect."

According to data from the NSW government, 72 per cent of the deaths recorded since mid-June were people who were unvaccinated.

This is similar to the situation in Victoria, where 73 per cent of people who died in the current outbreak were unvaccinated.

'The worst epidemics' are in Victoria Epidemiologists aren't exactly sure why Victoria has had more COVID infections and deaths than any other state. (AAP: Con Chronis)

An unfortunate reality for Victorians, which has puzzled many epidemiologists, is that their state has borne the brunt of the pandemic.

The same factors that have seen it record the greatest number of cases across Australia might also be contributing to its higher death rate.

"Victoria has always seemed to have have the worst epidemics in Australia, and I don't think we fully understand why that is," Professor Trauer said.

He believes factors like seasonality, population density, connectedness or demographics could all be contributing to the trajectory of Victoria's outbreaks.

Victoria's Department of Health said that it was not possible to provide a clear comparison with NSW, since there were so many other factors to take into account.

"The death rates between NSW and Victoria cannot be compared at this time without a detailed study of the cases concerned, taking into account the ages of cases and other co-morbidities," a spokesperson said. As Omicron takes hold in several states around the country, Professor Trauer says severe infection and hospitalisation, not just deaths, will be a "key metric" for all governments.

"We're at a substantial risk of overwhelming our health services and our hospitals over the next few weeks," he said.

"Perhaps, people just won't receive the care that they need and [we] will have deaths that would otherwise have been avoidable."

Omicron might be less severe, but it is incredibly infectious.

How the world is dealing with Omicron Early research suggesting the Omicron variant is less deadly is giving hope to some countries, but others fear the sheer number of cases will put additional pressure on all sectors of society.

So, even though you may have only a small chance of developing a severe infection if you do catch Omicron while fully vaccinated, "sheer maths" dictates that at a population level, hundreds of thousands of active cases will still put a lot of pressure on health care systems.

"The next few months will be difficult" Professor Blakely said.

Professor Trauer said state governments needed to ramp up rates of third vaccinations, particularly among vulnerable groups, to stave off the most dire predictions for the outbreak.

"I think there's still more we could do in terms of programs to get particularly elderly, vulnerable people vaccinated," he said.

"It's really critically important to look at boosters at this point."