Ukraine filled out a questionnaire of a potential EU member: what does it mean

Zelensky made the first technical step in the EU

Kyiv announced that they had overcome the next stage on the path of Ukraine's accession to the European Union. However, the step disseminated by the Ukrainian authorities is still more formal than real. We are talking about the fact that President Volodymyr Zelensky filled out the so-called questionnaire, handed over to him in early April by the head of the European Commission. Now the document, the contents of which have not been disclosed, has been sent to Brussels. We figured out how much Ukraine has actually come closer to the “European dream” and what else awaits it on this path. 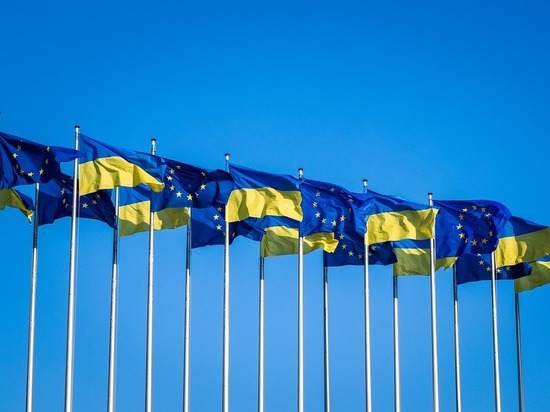 The questionnaire presented to Zelensky by the head of the European Commission, Ursula von der Leyen on April 9, although mandatory, is technical in nature and is only the first step – after Kiev's application for membership already filed in February. Although the European Commission said that Ukraine's “urgent” request would be considered as a matter of urgency, it is still impossible to get away from standard bureaucratic procedures.

“The document that Mrs. von der Leyen provided has been completed by the Ukrainian side,” Igor Zhovkva, deputy head of the office of the Ukrainian president, said on television on the evening of April 17. According to him, now it is the turn of the European Commission, which, having studied the completed questionnaire, should officially make recommendations to the EU Council regarding the implementation of the Copenhagen Union criteria by Kiev. Zhovkva himself immediately made an optimistic forecast, expressing the hope that the “verdict” of the European Commission would be in favor of Ukraine. “And then the ball is on the side of the EU member states,” said a representative of Zelensky’s office.

The fact that the European Commission is likely to take the side of Kyiv seems to be a foregone conclusion, it is not without reason that Ursula von der Leyen has several times started talking about the inevitability of the Ukrainian future in the EU over the past month and a half. She also mentioned this separately when she handed over the questionnaire to Zelensky. “We are with you in your dreams of Europe,” she said. — Dear Vladimir, my message is clear: Ukraine belongs to the European family. We have heard your request, loud and clear.” She also actually removed the issue of Kyiv's notorious “commitment” to the EU ideology, noting: “Ukraine shares our values. And, by virtue of our association agreement, it is already closely connected with the union.”

Problems for Ukraine’s European ambitions, however, despite the peppy statements of von der Leyen and Zhovkva, will begin exactly when it comes to legislative EU institutions.

The activity of the European Commission as an executive body in this case is of an intermediate nature, its task, to put it simply, is to conduct a “primary diagnosis” for Kyiv’s fundamental agreement with the Copenhagen criteria.

They, in turn, are indicated very vaguely: observance of democratic, legal principles, fundamental freedoms, the presence of a market economy and a willingness to follow common European norms of law. But the main details – acts that bring national legislation to a common standard, the definition of mandatory economic indicators, etc. – will be the subject of discussion at the next stage. Moreover, even within the framework of compliance with the Copenhagen criteria, a country, in particular, may be required to provide information about minorities living in its territory (on any basis) and to prove the absence of discrimination against them.

It is also important that Europe has repeatedly stated that there is no accelerated procedure for admission to the EU, and the difficult situation, including hostilities, in this case is not an indulgence for the applicant country, but rather an aggravating factor. French President Emmanuel Macron openly said back in March that in the current situation, the admission of Ukraine to the European Union looks inappropriate.

This position is also based on the historical experience of unification. As Vladimir Zuev, a professor at the Higher School of Economics, recalled in a conversation with MK, in its history the European Union has not deviated from the rules for admitting members only after confirming compliance with all criteria: “It is clear that Ukraine, both economically and politically, does not meet these requirements at the moment. Therefore, the EU will not be able to accept it in the short term. But Brussels is not in a position to refuse membership at all, since it has already promised to support Kyiv in every possible way, including in its pro-European movement. The way out of this stalemate is likely to be that the European Union makes a decision in principle on the accession of Ukraine, but the date of actual accession will be postponed by establishing a transitional period.

The expert notes that such measures had already been used at one time – just at the conclusion of the mentioned von der Leyen association agreement: “As you know, Moscow then objected to the immediate entry into force of the agreement, in that part that concerned the economy. There were many unresolved issues, primarily technical ones: if Ukraine immediately switched to European standards, this would significantly affect its trade and economic relations with Russia. The EU at that time went along by concluding an agreement with a deferred execution of the part relating to the economy – a year later. Now the delay may be longer.”

At the same time, during the transition period, Brussels is likely to actively assist Kiev both at the advisory, expert and financial levels in order to solve the pressing economic problems of Ukraine. Only after that, a truly substantive discussion of the country's membership is possible.

“A lot of countries are against the immediate entry of Ukraine into the EU, so putting the situation on hold, with parallel assistance to Kiev, will be a compromise solution,” Vladimir Zuev believes .

At the same time, many volatile factors influence the conjuncture within the EU. If, for example, Poland until relatively recently was not one of the most active supporters of Ukraine's membership in the union, now national considerations have come to the fore for it.

“We see that Warsaw helped the Ukrainians the most by accepting up to two million refugees. Now this is a forced measure, but it is important for the Polish authorities to understand what will follow this. If the EU decides in principle to join Ukraine, even with a delay, Warsaw will be able to refer to this by sending migrants home (after the stabilization of the situation). Therefore, the Poles in the European Union are now interested in speaking in favor of Kyiv's intentions. If you say “no” to Ukrainian integration, this will lead to even greater chaos,” the expert emphasized.

Speaking of long-term prospects, it is worth noting that even after a positive EC verdict, and in the event of a fundamental (even and “delayed”) consent of the EU, the final entry of Ukraine into the union will be tied to the consensus of all member countries of the association. And if dissenters remain among them, integration will be further delayed until the purely internal contradictions in the “common European home” are resolved.