Trump has power. Trump has money. Trump is holding packed rallies. Is his run in 2024 inevitable?

Seven days after Donald Trump left the White House in 2021, Republican House Leader Kevin McCarthy shared a picture of himself.

It was the first of many like it, something that's since become a pilgrimage for Republicans. A trip to kiss the ring of the former president at his Mar-a-Lago resort in Florida. 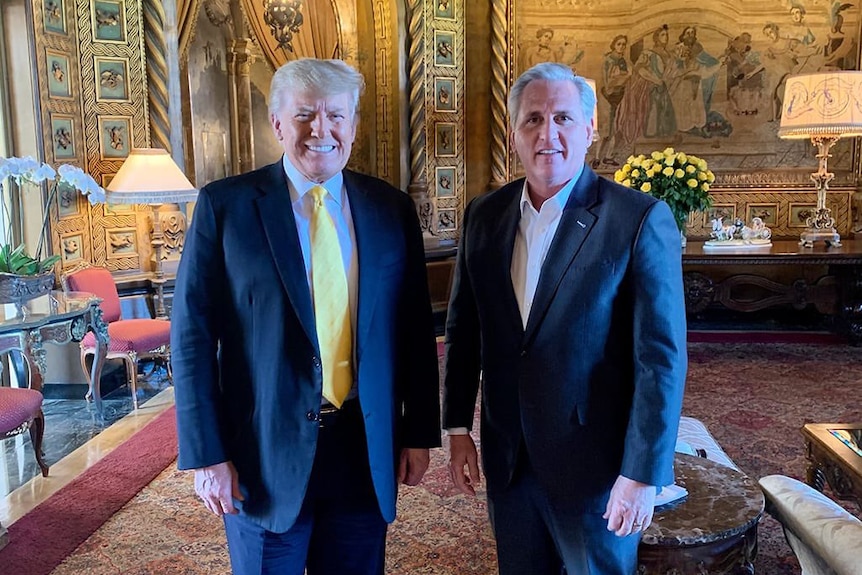 Trump had just become the first US president to be impeached twice. He was already on an ignoble list of sitting US presidents to be voted out after one term.

He was still spreading false information and conspiracy theories about the 2020 election. There were rumblings the former president was about to create a breakaway political party because of the savage bickering between him and other powerful Republicans he once courted as allies.

But here was one of the most senior Republicans, who just weeks prior had said that Trump "bears responsibility" for the January 6 attacks, smiling next to the grinning former president.

"President Trump's popularity has never been stronger than it is today," a statement released with the photo read.

Commentators railed against the meeting, and the suggestion that Trump was anything but finished, politically speaking.

But almost a year later, the statement has proved prescient.

Trump's got money. Trump's got a vice grip on power in the Republican Party. Trump's holding packed-out rallies again. Some of the supporters who gathered to hear Donald Trump speak at a rally in 2021.(Reuters: Rachel Mummey)

And he's hinting that another run at the White House is inevitable.

Ex-presidents are supposed to be quiet

It’s tradition that US presidents retreat from public view for a time after leaving the Oval Office.The move is supposed to give the incoming president clear air to bring the nation together after an election, and give the outgoing president a break after their years of service.

It was always going to be different with Trump, not least because the days after he left office were dominated by his still active impeachment trial in the US Senate.

"Do you miss me yet?" was his opening line.

Space to play or pause, M to mute, left and right arrows to seek, up and down arrows for volume.WatchDuration: 1 minute 32 seconds1m 32s Donald Trump hints he may run for office again at the CPAC conference, making his first major appearance since losing the presidency.

Trump's post-presidency plan started in earnest, and the "end of Trump" chorus began to fade into the background.

He started publicly endorsing candidates in Republican primary contests, often as a way to enact revenge on party colleagues who voted to impeach him a second time.

Trump's trademark rallies returned in June 2021, including one at the Iowa State Fairgrounds, the event presidential hopefuls flock to in an election year. Trump's adoring fans were eager to return to rallies in 2021, despite the lack of national elections.(Reuters: Rachel Mummey)

The same month, his former advisor Jason Miller made clear how the former president was viewed by Republicans.

"President Trump is the leader of the Republican Party," Miller said in an interview.

Republicans who took on Trump are in two camps

Trump became a regular guest in the US conservative media ecosystem, appearing on his preferred programs on networks like Fox News. Books with his name and face on them, written by the mainstream journalists he called "enemies of the people", topped the New York Times best-seller lists. Trump's supporters were bombarded with requests for money like it was an election year, sometimes at least one plea per day for a month in 2021 according to the Independent.

As a result, the money continued to pour into his Save America PAC (an official fundraising organisation with a reported war-chest of $US85 million ($119 million), with the PAC claiming it had nearly one million donors on its books in November.

The PAC then hired staff in Iowa, the first state to vote in the 2024 Republican primary.

While there was no shortage of Republicans lining up to take on the former president in the wake of the January 6 attacks, in the year since nearly all have fallen into two camps.

Those who've stuck by their guns have been pushed to the fringes of the party or retired from politics. The rest came crawling back to Team Trump. Republican Liz Cheney took a stand against Trump and lost her official leadership role in the party.(AP: J Scott Applewhite)Trump's vice-grip on the party in 2022 has roots in 2016

To understand Trump's appeal in 2022 and beyond, it's helpful to start with the very things that delivered him the White House in 2016.

At this moment he can again embrace the outsider, anti-politician message he could never truly grasp in 2020 while the seat at the Resolute desk was his.

That message inspired loyalty amongst his most fervent supporters like few American politicians before him.

The Trump superfans who went to his first event post-coronavirus Just 10 days after testing positive for coronavirus, Donald Trump held a rally at the White House. Here's why two of his biggest fans weren't worried about COVID-19 at the event.

And that loyalty inspired some of his fans to attend hundreds of rallies during his presidency, an "addiction" that compelled them to turn out — unvaccinated — even amidst the worst of the coronavirus pandemic in the US in late 2020.

Still as unwilling to let go of their hero as he is to let go of power, the former president's supporters haven't had to step away from the smorgasbord of misinformation that allows them to believe that Joe Biden did not win the 2020 election.

A polarised US media and multiple new tech platforms set up with the explicit idea of ending the "censorship" of established social media allows those who want to continue to live in the 2020 fantasy constructed by the former president to do just that.

Analysis by Pew Research of Republican voters found the equal-most dominant block (23 per cent of voters who are Republicans or lean Republican) are among Trump's strongest supporters.

Believing and repeating Trump's false claims about the 2020 election has become a litmus test for any elected Republicans, and for those wishing to become one in the future.

Republicans will need more than MAGA in 2022

On November 8 (local time) this year, Americans will head to the polls for the first nationwide elections since Joe Biden became president.

It'll be a referendum on a lot of things in America, and Trump needs to decide how much he wants to involve himself in the election.

A year after America's most documented crime, something strange has happened Twelve months on from one of the most significant assaults on American democracy in living memory, the government is still under attack, writes Kathryn Diss.

Advisers are reportedly urging him to play a quiet kingmaker role rather than put himself on the ballot, but the former president was never known for listening to anyone other than himself or staying quiet.

What little electoral evidence we have from 2021 also presents a muddier picture of the future for Trump than his meteoric rise back to the top of the Republican party might suggest.

The California recall election was between a Republican who tied himself to Trump and a Democrat who did everything he could to raise the spectre of the former president. The Democrat won handily.

The Virginia gubernatorial election was between a Republican who barely uttered Trump's name, and a Democrat who did everything he could to raise the spectre of the former president. The Republican won handily. Republicans will need more than just Trump loyalists if they want to win back the House and the Senate and land a serious blow on Joe Biden in November.

Trump remains widely unpopular with the broader American electorate according to an average of polls from FiveThirtyEight.

Can Republicans walk a tightrope of putting the spotlight on Trump that their base demands while not reminding undecided voters why they walked away from him at the 2020 election?

Democrats are confronted with a picture that's as muddy as the Republican one.

Do they run a campaign not focused on Trump (as some party insiders are suggesting) to replicate their 2018 midterm success?

Or does the party talk up the threat of Trump 2024 (as other insiders suggest) to replicate their 2020 success, and distract from their own unpopular president in the process?

How the Capitol riot unfolded on January 6 It took just an hour for Donald Trump's supporters to overwhelm security at the Capitol and launch an unprecedented assault on America's democracy.

Read moreWill he? Or won't he?

Throughout 2021 Trump has winked, nodded, suggested, intimated and joked about a 2024 run at the presidency.

He was reportedly even talked out of announcing while Biden struggled with the US exit from Afghanistan.

Advisers were reportedly wary of making him a target of the upcoming 2022 midterms and of campaign finance laws that would kick in once Trump is officially a candidate.

It also keeps any Republican challengers to the throne at bay.

"He tacitly keeps the 2024 crowd on notice that nobody can move a major muscle until he decides what he's doing," Kellyanne Conway, one of Trump's former top aides, told the Washington Post. A year on from January 6, and there's still only one man Republicans want leading their party – Trump.(AP: Evan Vucci)

Trump is no doubt bolstered by poll after poll that show him as the man Republicans want in 2024. A recent Politico-Morning Consult poll showed 69 per cent of Republicans want Trump to run again.

When Trump is compared to the Republican alternatives, no challenger is even close.

A Harvard CAPS-Harris Poll found 58 per cent of Republican voters it surveyed wanted Trump to run in 2024. The next closest challenger was former vice president Mike Pence on 13 per cent, followed by Florida Governor Ron DeSantis on nine per cent.

'Have a good life'

At his lowest ebb in 2021 after January 6, Trump gave a speech at a small airport to a gathering of mostly family in his last hours as US president. His own VP was helping the new president get sworn in on Capitol Hill.

Lingering on the last few words of his speech, the president's face was stony, a reflection of the bitter January wind that did not relent in the brief nine minutes that he was speaking.

"Have a good life, we will see you soon," Trump said.

It was a typical Trump hedge. A non-committal phrase that allowed anyone to read into it what they wanted, with enough wriggle room to make a future political career a possibility.

"I think you'll be very happy," he said.

The words had the same meaning as the January speech. Non-committal, open to interpretation with wiggle room.

But this time, Trump's face was different as he spoke.