They stormed the Capitol last year. Here’s what happened to them

Few will forget the image of Jacob Chansley, shirtless, painted and wearing a horned headdress, yelling in the US Senate chamber on January 6, 2021.

The unprecedented breach of the US Capitol one year ago has been described as one of the most recorded, videoed and posted about criminal acts in history.

The FBI says more than 700 people have been charged over the assault on the Capitol, but its investigation remains ongoing and more charges are still possible as it combs through the vast amount of footage from the day.

Here's what happened to the people in some of January 6's most confronting images. Jacob Chansley, also known as Jake Angeli, was one of the most infamous participants in the riot.(Reuters: Stephanie Keith)

Jacob Chansley was one of the most visible figures at the riot, due to his distinctive costume and his eventual breach of the Senate chamber itself.

A reporter from the New Yorker filmed him sitting in the chair of then-vice president Mike Pence, and video of the riots shows him bellowing chants inside the chamber.

He was initially charged with a number of offences but took a deal where he pleaded guilty to one count of  obstructing an official proceeding and was sentenced to 41 months in prison.

The sentencing judge noted Chansley had "done a lot" to show he was "on the right track" and the court heard that Chansley had been diagnosed with schizophrenia, bipolar disorder, depression and anxiety since his arrest. 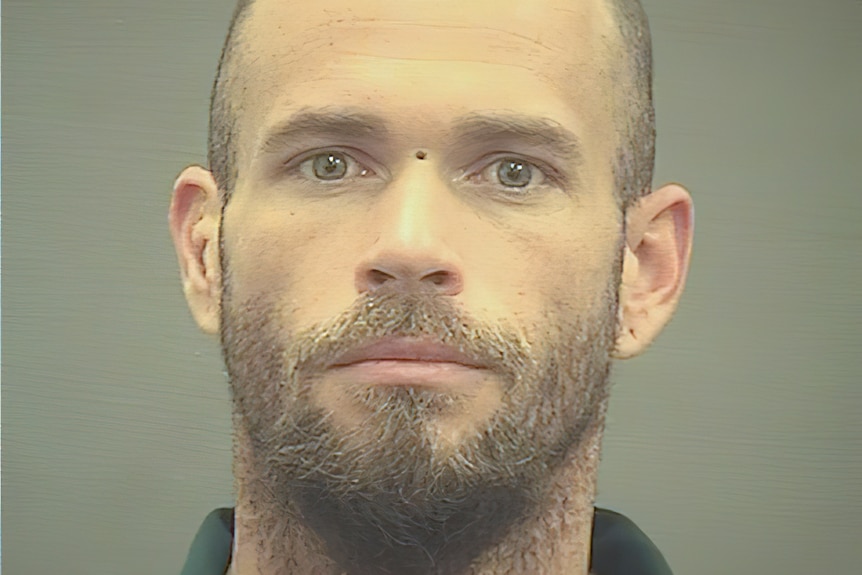 "The hardest part of this is that I know I am to blame," Chansley said in a statement before he was sentenced.

He also said he was disappointed that Donald Trump had not pardoned him before the end of his term.

He has reportedly filed an appeal to void the guilty plea. 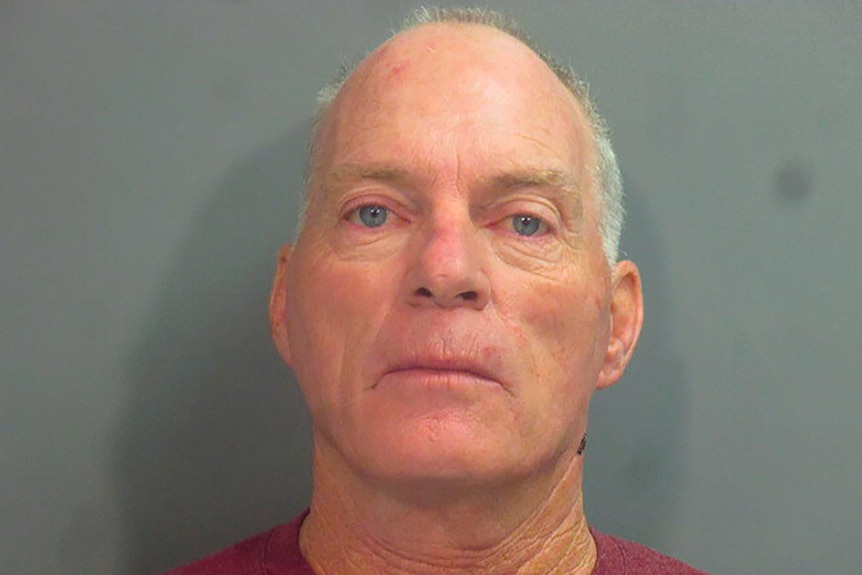 Arkansas man Richard Barnett was part of a posse that broke its way into House Speaker Nancy Pelosi's office once inside the Capitol building.

He was photographed putting his feet up on a desk in her office during the riot and was later interviewed outside having taken mail addressed to Ms Pelosi with him.

He claimed he did not steal the envelope and that he "left a quarter on her desk" in return.

It was also alleged that he was armed with a stun gun while in the building.

Barnett has pleaded not guilty to several charges linked to the uprising and remains out on bond while awaiting trial. 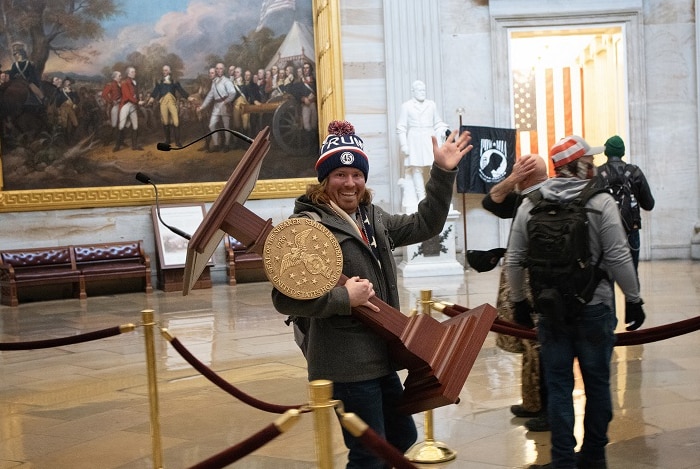 In one of the most enduring images of the riot, a grinning Adam Johnson waves while carrying a lectern used by Nancy Pelosi.

The Florida man did not take the lectern home with him and it was later found in a separate part of the Capitol building.

Johnson took a plea deal after initially being charged with entering a restricted building, stealing government property and violent and disorderly conduct on Capitol grounds.

He pleaded guilty to only the first charge as part of the deal, but has not been sentenced yet. Among the throng of rioters that stormed the Capitol building and attempted to disrupt democratic processes, Robert Packer stood out less for his conduct and more for his attire.

His black hoodie emblazoned with a skull logo associated with the Nazi SS and the words "Camp Auschwitz" and "Work brings freedom" — an English translation of the phrase "Arbeit macht frei" which stood over the death camp's gates — sent a chill through many observers.

Packer has pleaded not guilty to charges of entering a restricted building and violent entry and disorderly conduct. One of the officers recognised for their efforts on January 6 was Eugene Goodman, a Capitol Police officer, who led rioters on a chase up a staircase, luring them away from fleeing senators.

Leading the chase of Officer Goodman was Doug Jensen, who can be seen in video footage behaving belligerently in a QAnon-branded shirt.

Space to play or pause, M to mute, left and right arrows to seek, up and down arrows for volume.WatchDuration: 39 seconds39s Jensen has pleaded not guilty to all charges and is awaiting trial.

Eugene Goodman was awarded the Congressional Gold Medal for his work in drawing Jensen and the rest of the crowd away from the Senate chamber. In the aftermath of the riot, questions still circulated about how serious a threat those who broke in were to political leaders.

An image of a man prosecutors say is Eric Munchel leaping over a barricade in the public gallery of the Senate Chamber with plastic zip tie restraints in one hand suggested at least some rioters were serious in their threats of violence. 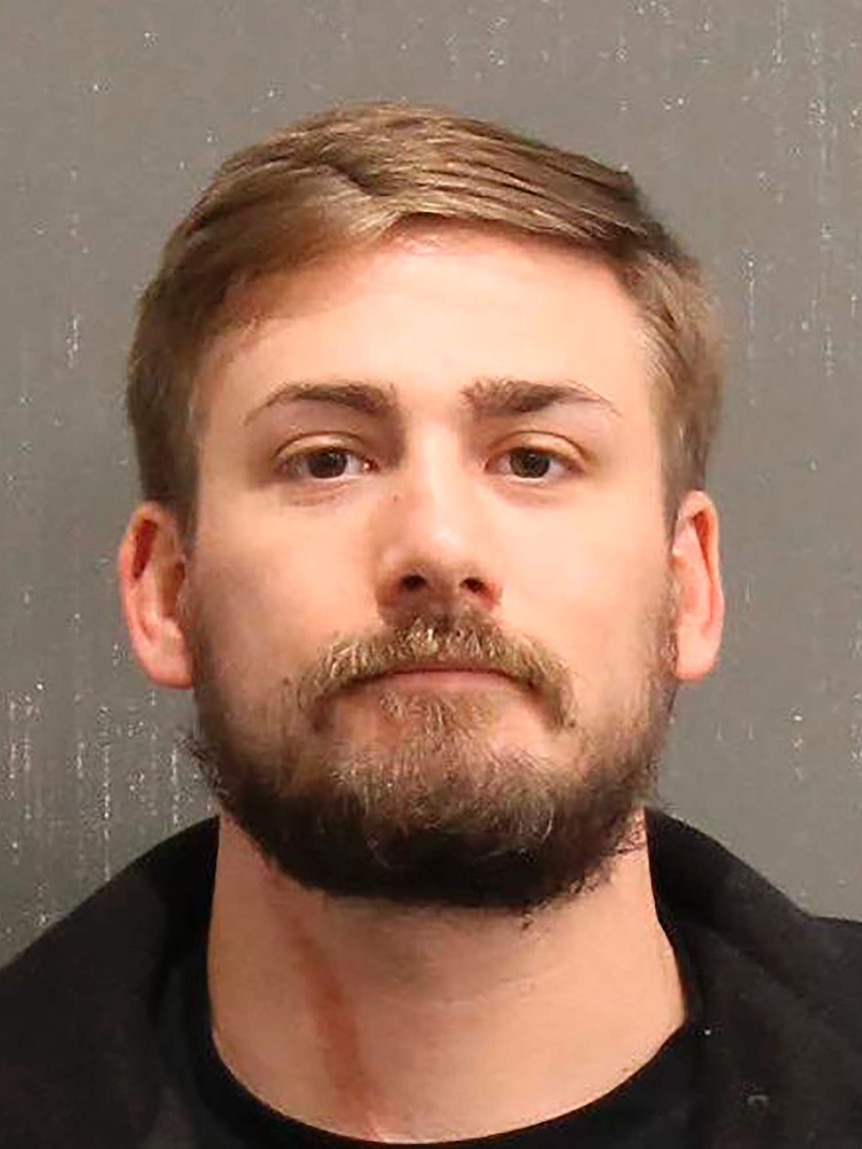 An FBI agent who prepared an affidavit against Munchel said such "flex cuffs" were used to "restrain and/or detain subjects".

Munchel was charged alongside his mother Lisa Eisenhart and both have pleaded not guilty. Of the hundreds of rioters that stormed the Capitol building, Derrick Evans was one of the few who was actually an elected representative.

The West Virginia Republican state politician live-streamed his breach of the Capitol in a first-person video that was later used as evidence against him.

If there was any doubt about who was holding the camera, Evans can be heard exclaiming "Derrick Evans is in the Capitol!' — something FBI investigators would later use to help identify him.

Evans was charged with knowingly entering or remaining in a restricted building and violent entry and disorderly conduct on Capitol grounds.

He pleaded guilty and is awaiting sentencing while on bail.