The system ‘let down’ Scott Johnson, but his family wouldn’t rest until his mystery killer was found

Thirty-three years ago last month, a local fisherman came across a gruesome scene on the rocks off Blue Fish Point in the idyllic northern beaches of Sydney.

The naked body of American PhD mathematics student Scott Johnson lay at the foot of a steep cliff face at Manly's North Head.

On the cliffs above were Mr Johnson's clothes — complete with a pen resting on top.

It was December 10, 1988, and it marked the beginning of one of Sydney's longest-running unsolved murders, even if it was initially ruled as suicide.

But Mr Johnson's family never believed their beloved Scott, who moved to Australia to be with his partner in 1986, had killed himself.

Their tireless campaign to find the truth led to the finding at a third coronal inquest, held in 2017, that Mr Johnson had been the victim of a "gay hate crime".

A renewed police investigation was launched, and in 2018 a $1 million reward for information which could help solve the crime was announced.

That was doubled to $2 million in 2020 when Mr Johnson's tech entrepreneur brother, Steve, put his own money on the table, hoping it would finally bring about justice.

Now, just over 33 years after his death, the case that "couldn't be solved" finally has. 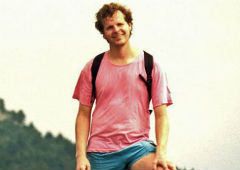 Scott Johnson's family fought for his death to be investigated.(Supplied: Johnson family)

On Thursday the NSW Supreme Court heard Scott Phillip White had confessed to the murder after he had escaped detection for decades.

In May 2020, detectives stormed White's Lane Cove home after an informant provided crucial intelligence leading to a breakthrough in the unsolved crime.

When officers knocked on White's door his reaction "wasn't one of surprise", according to the case's lead detective.

White was led away in handcuffs before being charged with Mr Johnson's murder.

At the time, Detective Chief Inspector Peter Yeomans said that without the informant's evidence, which came soon after the $2 million reward was announced, the case "couldn't have been solved". Scott White backflipped on his earlier plea of not guilty.(Supplied: Nine News)

"It couldn't have been solved without the community coming forward with information."

Last year White pleaded not guilty to murder but reneged on that plea on Monday and will now face sentencing on May 2.

Outside court, Steve Johnson said that after years of suffering injustice, "my faith is restored".

He choked back tears as he remembered his brother as a "brilliant", proud gay man, who had moved from his homeland after falling in love with an Australian.

Scott White admits he murdered American mathematician Scott Johnson, whose body was found at the bottom of a Sydney cliff more than 30 years ago.

A first inquest in 1989 concluded Mr Johnson had killed himself, while a second in 2012 ended without a conclusion as to how he fell.

At the third inquest, new witnesses came forward to to say the area was a known gay beat, and told of gangs of men, including Australian Army soldiers, converging on the cliffs to commit gay hate assaults and robberies.

A private detective hired by the Johnson family, Daniel Glick, believed there could be "many more" unsolved murders in the area resulting from gay hate crimes. Steve Johnson looks over the cliffs at North Head in Manly, where his brother plunged to his death.(Lateline: Emma Alberici)

Mr Glick was angered police had initially denied the area was a gay beat, when it was "clear to everyone who lived in Manly" that it was.

One witness told the inquest about a group called the Narrabeen Skinheads, who would stalk known gay beats and bash men they found.

In his finding, the coroner said he was satisfied Mr Johnson was murdered, but could not conclude if there was any reliable evidence to identify the perpetrators.

"When Scott Johnson's body smashed into the rocks … a life full of promise and exciting potential was tragically cut short and his family lost a cherished member," he said.

The ruling came too late for Mr Johnson's parents, who died before their family crusade was vindicated. "The plight of young gay men in Sydney, probably around the world, was a very difficult one and not only were they let down by police, I think they were let down by the community and probably the media," he said.

Yesterday Steve Johnson said his brother's university professor, the last person he spoke with before his death, told him Scott had just put the final touches on his PhD.

Scott Johnson was hopeful for the future and could have got a job at any of the great universities around the world, according to his professor.

To Steve, his brother was a modest young man taken from his friends and family.

"He was brilliant … but you'd never hear him say that," he said.

"He was my best friend."