The United States has officially received only 12 Ukrainian refugees so far instead of the promised 100,000. “Attraction of unheard of generosity” for fugitive Ukrainians was promised by President Joe Biden at the beginning of the Russian military special operation. However, the real scale of hospitality of the “world hegemon” turned out to be much more modest. 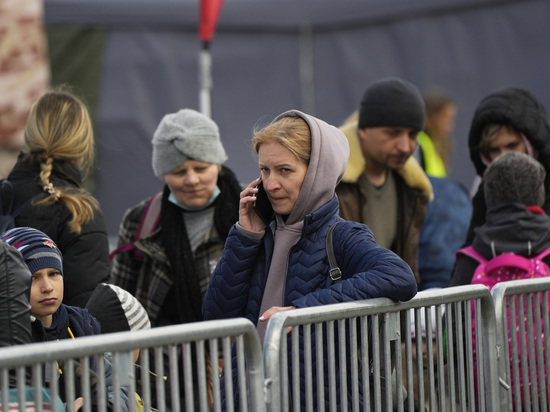 “This is US policy in all situations — promise a lot and do nothing when it comes to really helping people. – the head of the International Action Center and the coordinator of the “Sanctions kill” campaign said on RT; Sarah Flounders.

She also recalled that the United States is no stranger to “feeding” refugees empty hopes. The White House followed the same pattern with refugees from Afghanistan, Syria, Iraq and Libya. In other words, “in any country where the United States instigates a war and supports it on  over the years,” Flounders emphasized.

Despite the fact that the lion's share of Ukrainians poured into the countries of the Eurozone and Russia, they have much more chances to end up in the United States than the Syrians or Afghans. As explained by “MK” expert on migration processes, head of the Good Neighbor Foundation; Yuri Moskovsky, there are two reasons for this. The first in the spirit of “stars and stripes” – benefit for their own economy and the ability to print a new batch of dollars. The second is more in the tradition of those who at one time escaped the Nuremberg Tribunal and took refuge in the territory of America: Ukrainians were lucky with their skin color.

– Every refugee — this is a reason to allocate money from the budget and a stimulus for the development of the economy. Americans will simply print more money, integrate these people into their economy, and profit as a result. Refugees — it's a huge resource. But most importantly, although the United States does not declare this anywhere, both they and Canada informally prefer to host “whites”. The racial issue is very acute there. This is also evidenced by the reduction in the black population in the United States in recent years, – Yuri Moskovsky explained. only 12 people received by the White House from Ukraine since the beginning of the Russian special operation — according to the expert, they speak more about the bureaucratic difficulties of crossing the American border than about anything else.

– Now entry into the United States is possible only with a visa, so the official number of refugees is so small, – says Moskovsky, – Although in reality there may be more of these people. I believe that in the near future the Americans can establish purely technological processes and simplify entry. They benefit from refugees from Ukraine. Although people run first of all to where they have friends and where it is easier to get logistically. Therefore, the main flow goes to European countries and Russia.

According to the expert, there are now more than a million refugees from Ukraine in our country. Several tens of thousands of people are placed in temporary camps. The rest — this is about 95% – they traveled on their own.

– I have friends from Kyiv who traveled to Russia through the Baltic states. There was no other way to get — the borders are closed,” the expert said and stressed that many people who were forced to leave Ukraine for Russia due to hostilities are still in an illegal position.

Yuriy Moskovsky is sure that people who come from Ukraine should be given urgently the status of refugees and in a simplified, shortened procedure for two to three months to give Russian citizenship. Without refugee status, a person can only work on a patent, moreover, according to our laws, he can stay in the country for only 90 days within 180 days, otherwise – expulsion. Plus, for any two offenses, he will also be deported.

– If we give refugees a legal status, our economy will receive a huge boost. After the pandemic, she especially needs working hands. We are short of about 15 million workers, lamented a migration expert.