The Chinese reacted to Biden’s words about Putin: “Unreasonable and immoral”

Joe Biden continues to insist on his rightness even after the White House had to try to soften the scandalous statements made during the visit to Poland American President to Vladimir Putin. “It is unreasonable and irresponsible for Biden to take personal grievances against Putin to the national level,” is how the editorial of the Chinese edition of the Global Times reacted to the attacks of the US leader. 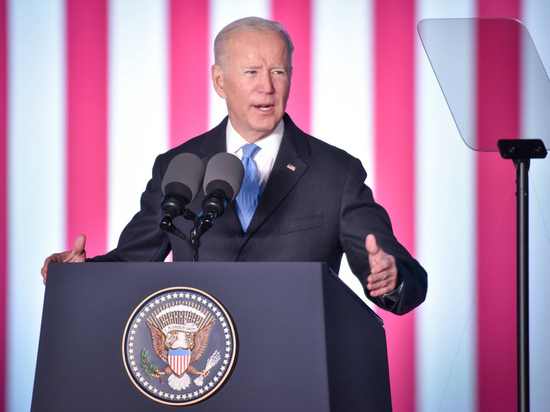 “After US President Joe Biden said on Saturday that Russian President Vladimir Putin ‘cannot remain in power’, both the White House and some US lawmakers rushed to put out the fire set by their president, — reminiscent of the Global Times. — But no matter how well Biden's propaganda machine works, it cannot underestimate the fact that such a blunt statement at a difficult moment can further inflame the situation. This was unwise and irresponsible, reflecting a serious problem in US politics: some politicians are taking their personal grievances to the national level.

The statements of the President of the United States testify to the policy of Washington, Global Times emphasizes, noting that against the backdrop of the development of the Ukrainian crisis, such attacks can lead to very dangerous consequences. U.S. Senator Rob Portman of Ohio, who is the top Republican on the Senate Foreign Relations Committee, called Biden's line a “terrible oversight,” urging Biden to “stay on script.”

Commenting on Biden's insulting remarks about the Russian president, Liu Xiang, a researcher at the Chinese Academy of Social Sciences, called Biden's attempt to bring his personal expressions of discontent to the national level risky.

According to the Chinese expert, it was Biden who played an important role as a foreign policy figure on Ukraine in 2014, but he did not achieve exactly what the United States wanted. Now the Ukrainian crisis has again become a problem for Biden. “Now the United States is in deep distress. The United States appears to dominate public opinion, but on the battlefield, Russia has the upper hand. In addition, the US wants to move its forces to the Indo-Pacific region, but they must reorient themselves towards Europe politically and militarily. This is not what Biden wants, "— Chinese expert says.

Grinnell College's latest national poll on March 23 showed Biden's approval has fallen to 34 percent, with 52 percent of Americans disapproving of his work and 14 percent unsure of their attitude. In contrast to the fall in Biden's ratings, Putin's ratings remain strong: a poll conducted in early March by the All-Russian Public Opinion Research Center showed that Russian public confidence in Putin rose to 79.6%, recalls the Global Times.

“The US has made attractive gestures internationally, but ordinary Americans don't believe it,” — noted Liu Xiang. Americans have just emerged from a quagmire they've been in for 20 years, and now they're facing another one that could be even worse, according to a Chinese expert. The American people have to endure soaring inflation and skyrocketing energy prices, but their government prefers to spend money to “support” Ukraine, rather than solving internal problems.

Biden's hostility cannot be reversed: it seems that his ultimate goal — defeat another nuclear power and overthrow its leadership. Many seriously fear that the Ukrainian crisis will get out of control and escalate into a nuclear clash.

“Many quarrels start with a quarrel. An offensive remark can have a number of political consequences, », — remarks Liu Xiang.

“Wouldn't it be a disgrace to American policy if repeated 'reservations' top leader of the country provoke a crisis that the American people cannot afford?”, — concludes the Global Times article.

In another publication in the Global Times, which also touches upon Biden's attacks on the Russian leadership, it is noted that the Ukrainian conflict — “This is just the latest of many examples of the United States pursuing its own geopolitical interests by aggravating conflicts in other countries or directly starting wars. In order to achieve global hegemony, the US used many resources, including political, economic, cultural, educational and manipulation of public opinion platforms, and created chaos around the world under the slogan of “human rights”, “democracy”, and “freedom”. .. From provoking wars around the world to expanding NATO to the east, from imposing sanctions against “rebellious countries”; to forcing other countries to choose one of the parties — The US acted as a “Cold War schemer” and “vampire” creating “enemies” and making a fortune at the stake of war.