Sam Kerr has been named on the three-strong shortlist for the prestigious FIFA Best award to honour the best women's footballer in the world in 2021.

The Australia captain and prolific Chelsea striker has been rewarded for her stellar season in which she became the Matildas' all-time top scorer at the Olympics and won the Golden Boot as the English Women's Super League's top scorer.

Kerr will have to beat her fellow nominees, Spaniards Jennifer Hermoso and Alexia Putellas, who were both in the Barcelona team that hammered Kerr's Chelsea 4-0 in the Champions League final in Gothenburg in May.

A few days after that award was handed out, though, Kerr produced another tour de force by scoring twice, including a brilliant decisive chip, to help Chelsea retain the Women's FA Cup with a 3-0 win over Arsenal at Wembley. 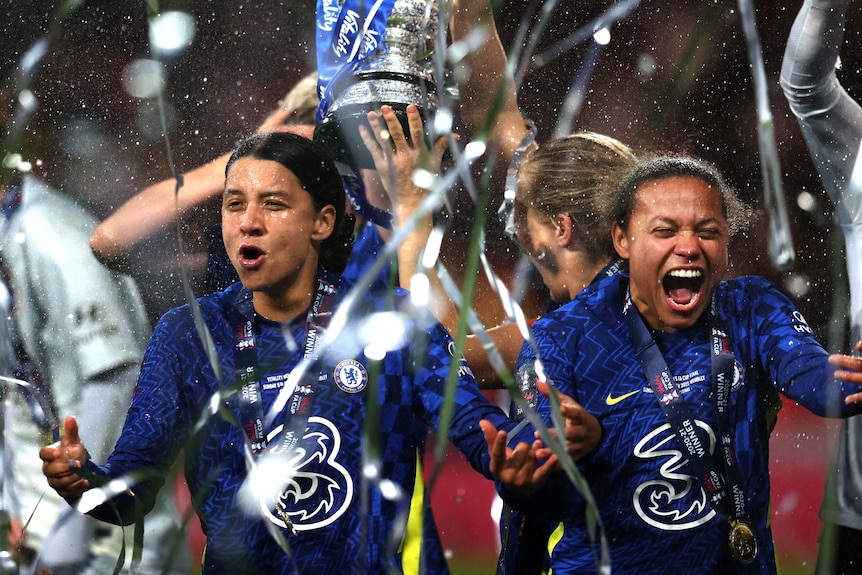 That ensured Chelsea completed a domestic treble of trophies following their WSL and League Cup triumphs.

The 28-year-old had an exceptional year on the international stage too, with her goal in Australia's 4-3 defeat to USA in the bronze medal match at Tokyo 2020 making her the Matildas' all-time leading scorer with 48 goals. She's since added another against Brazil.

The awards shortlists were announced by the world football governing body on Friday in a presentation ahead of the award being handed out on January 17 as part of a TV show in Zurich.

Lewandowski won the title in 2020 with his former Germany international teammate Sami Khedira saying there was a "great chance" he would retain the honour.

The award is voted for by a jury of current national team coaches and captains, one specialist journalist from each territory represented by a national team and fans registered on FIFA.com.

One name notable for its absence was that of Cristiano Ronaldo, the Manchester United superstar who's been left off the shortlist for only the second time since he was first nominated at the 2007 FIFA awards.

Nominees in other award categories were announced earlier in the week, with Emma Hayes, Kerr's boss at Chelsea, shortlisted for the best women's coach award.