The RSPCA has renewed its call for calf roping to be banned.

If you have been to a rodeo or watched the hit US TV series Yellowstone, you have probably seen it, but the RSPCA says the practice causes fear and pain and should not be seen as entertainment.

WARNING: This article contains footage that may distress some viewers.

Calf roping has been a part of the rodeo scene for a long time, stemming from the days when riders on horseback did all the work on farms.

It involves a horseback rider throwing a loop of rope around the neck of a calf, dismounting, and then tying three legs together in as short a time as possible.

Calf roping is still used on ranches in the United States, but not so much in Australia now that vehicles have taken over from horses in the pastoral industry.

The practice has been effectively banned by governments in Victoria and South Australia, and the RSPCA is calling for the ban to be extended to other states by raising the minimum weight of animals used to 200 kilograms. 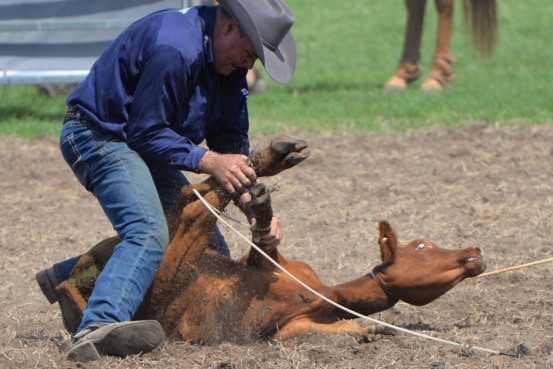 Rodeo fans see it as sport, but white eyes and bellowing are signs of a calf in distress, according to animal welfare groups.(Supplied: RSPCA)

Di Evans, the senior scientific officer with RSPCA Australia, has 20 years' experience as a vet and says recent studies prove that calves experience high levels of stress and fear during calf roping.

"Those calves when they come out of that chute are literally running for their lives," she said.

Dr Evans said observers had noticed that when calves were caught and forced to the ground you could see the whites of their eyes as they bellowed in fear.

"That is a very significant indicator that animals are suffering," she said.

The Queensland government finalised a review of the Animal Care and Protection (Code of Practice about Rodeos) in December.

"The government ignored scientific evidence of its harm and the unanimous call for a ban from the five animal protection groups," she said.

"Despite numerous deaths and injuries of rodeo animals documented over recent years, there is still no mandatory requirement for an onsite vet to be in attendance at rodeos." Some rodeos run a different version of the sport where the calf is roped, but not thrown and tied.(ABC Rural: Kim Honan)Rodeos 'respect' animal welfare

The Australian Bushmen's Campdraft and Rodeo Association executive officer, Craig Young, said the sport was "very respectful" of animal welfare, had a code of practice to ensure it was done properly, and banned any riders who did the wrong thing.

"We keep thorough records of animal injuries … and over the past 30 years of competition the injury rates to animals is less than 0.02 per cent," he said.

"We will not tolerate any competitor or contractor not handling stock in the right way."

He refutes the RSPCA's claim that the sport is abusive.

"There is a technique involved in the way the animal is handled and it's not an abusive technique," he said.

Mr Young said the industry had done a lot of work to develop a device that reduced the impact of roping on the animal by 70 per cent and rodeo animals usually lived better lives than those in paddocks. The  “Ropersmate” pulley device is designed to reduce the jerk impact on calves immediately after they are roped around the neck.(Supplied: Australian Bushmen's Campdraft and Rodeo Association)

Mr Young did not deny that the sport causes calves stress, but said it was no worse than what they experience on farms.

"Tests have proven that animals used in calf roping are not experiencing any more stress than an animal being treated or handled in normal animal husbandry practices," he said.

With 1,100 riders gathering in NSW for the Tamworth Rodeo Round Up and the RSPCA saying it will not rest until the whole sport is banned, it does not look like this stalemate will be resolved any time soon.