Adelaide woman Rachel High is among the thousands of Australian university students celebrating graduation this year.

But her university journey has been unique.

Flinders University, where Rachel studied, said it believed she was the first person living with Down syndrome to graduate with a university degree in Australia.

"It makes me feel great," Rachel said, reflecting on 10 years of hard work.

"[The best bit was] the ability for me to actually really study and really get in-depth with the study.

"I grew up on the stage, basically, and then I was thinking of that being my career.

"It expands your thinking, [and] it broadened my perspective in the theatre and the performing fields.

"It really makes you grow inside."

Rachel joined the university's Up the Hill program more than a decade ago and later studied a foundation course.

The 44-year-old earned enough points to apply for entry into a Bachelor of Arts and majored in drama and screen studies.

Now, parchment in hand, she said she felt excited and proud after a "long journey". Rachel studied with the help of a mentor.(ABC News: Carl Saville)

But that journey was far from straightforward, with "bad vibes" pushing her close to breaking point early in her studies.

"I was nervous and a little bit scared because I had no idea what to expect from the university, frankly," she said.

"That was the worst bit and I felt really down. I thought, 'Why am I here?'"

"There was no mentor, there was nobody meeting her at the gate and taking her into the classroom, there was nobody sharing that experience with her … and that caused incredible isolation, so much so that she didn't want to stay," Miriam said.

"Because people with intellectual disabilities don't go to university, they're not set up to support them in that way."

'Plenty of tears' breaking down the coursework

Miriam and her husband, John, set up a paid "buddy" support role for Rachel, and Flinders University later offered a mentor across the second half of Rachel's degree.

Rachel said connecting with others and "meeting new people" soon became one of her favourite parts of university life.

"I made some friends through my mentors and their friends as well," she said.

"I'm a research girl, so that kept me going, and I made friends in my own way.

"I'm [also] a visual learner, so I respond well to visual learning. Now I'm thinking I'm glad I stayed and glad I worked hard for it." Rachel's graduation was attended by her parents Miriam and John.(ABC News: Isabel Dayman)

Miriam said her daughter's academic experiences had been like that of "any other student", with "plenty of bad days and plenty of tears" along the way.

"She's determined and she does get on and do things," Miriam said.

"We became her group study, if you like, so we took the information home, we helped her to expand it and to find the relevant stuff she needed.

"We found ourselves going through a process of helping her to translate [academic language], understand it and then she was able to write the assignments."

The paper was published in a peer-reviewed journal last month.

"It was a really ambitious project and we really needed to dig deep," Professor Robinson said.

"I was very strongly convinced of the merits of her work, but a peer-reviewed academic paper is empirical evidence that this is a high-quality piece of scholarly work." 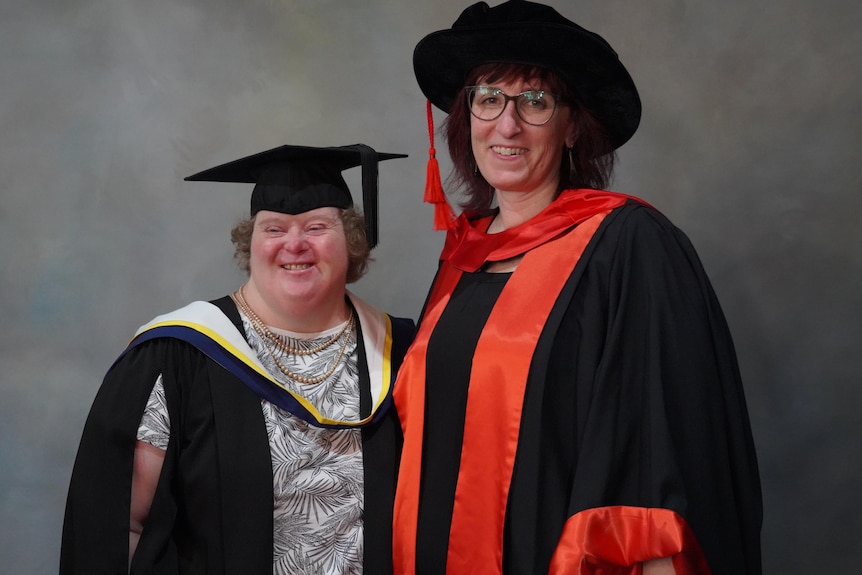 The paper consisted of a literature review examining the university experiences of people living with intellectual disability, and an autoethnography dissecting Rachel's own experiences.

Professor Robinson, who specialises in disability and community inclusion, said universities had a long way to go towards properly supporting students with intellectual and cognitive disabilities to access higher education.

The ABC is featuring stories by and about people with disability leading up to and beyond December 3, the International Day of People with Disability.

"It's time for us to re-look at the way that people with intellectual disability are provided with support at university, to think about what people should be able to expect."

She said improving access was as much about changing community attitudes as providing practical assistance, like deadline extensions and curriculum adjustments.

"We need to raise our expectations that people with intellectual disability can succeed at university," she said.

"Rachel shows us how possible that is."

'It really changed my world'

Rachel said she was thrilled to have "something to show" for a decade spent listening, reading, writing, studying and revising.

She hoped her achievement would be taken as proof that other people living with intellectual disability could pursue academic success, with the appropriate supports in place.

"The stereotypes [are things] they should ignore," she said.

"People like me should ignore that and work on it to teach them a lesson.

"[Studying] has really changed my world and my life." Miriam said she felt "overwhelmed" and "delighted" by her daughter's success.

"Everyone is ringing us up and saying, 'Isn't this fantastic?', and it is," she said.

"We can't believe it really … it's just much more than we ever dreamt it could be.

"When Rachel was born 44 years ago, we were told that it would be a good idea if we put her in a home and went and had another child.

"We didn't, of course — but that was the feeling at that particular point for someone with an intellectual disability.

"Here was this little girl, this baby, that people had such little hope for and now she might be changing the world for other people as a result of this."