As Queensland shifts to only publishing COVID-19 exposure sites of "most concern", some residents are taking it into their own hands to alert each other of possible exposures.

"We know as the numbers increase, the amount of investigation that the public health units will do will reduce," Dr Gerrard said on December 22.

"That is always something that we expected, and we will, as time goes by, wind back the public health response so we won't investigate every case to the -nth degree." The group is one of several across Australia sharing lower-risk contact tracing information not published by authorities.

"I set [the group] up because there was no other resource, and with the government obviously being overwhelmed at this point, we had to have somewhere where people can globally keep track of those things," Ms Clayton said.

Some people who have tested positive have even shared screenshots of their own check-in history.

'Hard to know if you're doing the right thing'

Ms Clayton said the group's membership had skyrocketed overnight, rising from 400 on Monday morning to more than 2,300 on Tuesday.

"[It's about] wanting to do the right thing and just letting people know, hey, there's a risk there – you're going to be okay, but just keep an eye out," she said.

"For a while I would obsess over the contact tracing list and then they stopped updating it, and it's just become really hard to know if you're doing the right thing."

Many businesses and organisations are now posting alerts themselves, which are gleaned by Ms Clayton's group and shared.

On Tuesday, Queensland recorded 1,158 new cases. The official contact tracing list was updated on Tuesday afternoon, adding a handful of Brisbane sites, multiple Townsville and Cairns sites, and a few regional sites to the list.

A Queensland Health spokesperson said the department was "focusing our contact tracing efforts on high-risk settings" as Omicron spreads through the state.

"Going forward, we will be limiting the exposure sites we publish to venues of most concern, including settings where vulnerable people may be infected," the spokesperson said.

"Given the rapidly rising case numbers in all parts of the state, we are asking Queenslanders to assume they are at risk of developing COVID-19 no matter where they are and take precautions such as wearing a mask in public and maintaining physical distance from other people."

The spokesperson urged people to continue monitoring the contact tracing page and use the check-in app when entering venues, "especially if you are considered vulnerable".

NSW and Victoria have stopped publishing exposure sites entirely: both the Service NSW and Service Victoria check-in apps alert people who have checked in to a venue at the same time as a positive case, but Queensland's check-in app does not.

Queensland Health and the Department of Digital Economies would not comment on whether the app would alert exposure sites in the future. 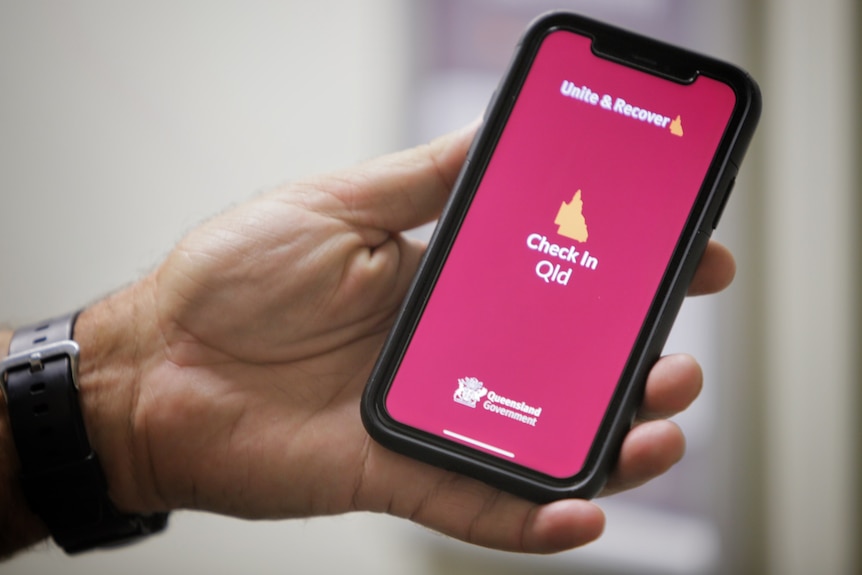 The Queensland check-in app is used to enter venues and can be linked to Medicare to show a person's vaccination status.(ABC News: Chris Gillette)

NSW is focusing its contact tracing efforts on household contacts of confirmed positive cases and high-risk venues. Unlike Queensland, NSW does not require people to be vaccinated to enter many venues.

Queensland's app has been downloaded more than 5.2 million times and averages about 33 million check-ins a week.

More than 86 per cent of Queensland's population aged over 16 is now fully vaccinated.