‘People have forgotten us’: The Afghan diaspora in Australia and the worries for those left behind

As the focus on Afghanistan's latest humanitarian crisis wanes, the everyday struggles of the Afghan diaspora have become more pronounced.

From those who left the war-torn country a decade ago to those who escaped the latest Taliban takeover, their stories reveal the perils of resettlement and the heartache of losing connection with their homeland.

For those forced to leave their homes, the months and years since have done little to lessen the pain.

Abdul fled Afghanistan in 2011 after the Taliban targeted him for being a journalist.

Two years and three countries later, he boarded a boat from Indonesia and arrived on Christmas Island after a five-day voyage.

He has not seen his wife and five children in a decade — they are still in Afghanistan. "Australia is a beautiful country. Nice people, lots of opportunities but when you don't have your family with you … that's jail for you," he said.

Abdul said his life had changed immensely since leaving Afghanistan.

"Before [the Taliban came] to target me, my life was very good. I got business, I got everything. I got my wife, kids, family, mother, sister. I was very happy."

Abdul is on a temporary protection visa (TPV) which grants temporary residency in Australia.

But TPV holders are unable to sponsor family members applying for Australian visas. Abdul fled from Afghanistan in 2011 after he was targeted by the Taliban.(ABC News: Steve Cavenagh)'People have forgotten us'

The Taliban's takeover of Afghanistan in August took a particularly hard toll on Abdul.

He said he felt "broken" and helpless because he was unable to relocate his family to Australia.

"My daughter said, 'Dad, you [have been living] for 10 years in Australia and people [are] going for free [but] you cannot take us from here?' I said, 'Ghazal, you will be coming soon'." Abdul said he and others in his situation are feeling abandoned.

"People have forgotten us, especially those on temporary visas. The government especially forgot us."

But Abdul said he still held on to the dream of a family reunion.

"I'm staying strong. I am not giving up … I know the Australian people [are] very nice people. I hope the government changes the policy so my family can come."

In a statement, a Department of Home Affairs spokesperson said family visa applications "continue to be processed".

"It remains the case that visa applicants must meet all requirements before a visa can be granted," it said.

It said the government is working to ensure visa options continue to be available to Afghan nationals "through Australia's longstanding Humanitarian and Migration Programs".

"Afghans will be a priority under the 2021-22 humanitarian visa program. An initial 3,000 humanitarian places will be allocated to Afghan nationals within Australia's 13,750 annual program," the statement said.

'They should be given permanent protection'

"Our understanding is that Canada is taking 40,000 people, Australia has not extended its humanitarian program at all," he said.

What is sharia law?

The Taliban have assured women their rights would be respected "within the limits of Islam", but what does that mean in practice and how does it compare to the rights women have in Australia?

Mr Gillespie said people on TPVs and SHEVs need to be granted permanent protection and an opportunity to be reunited with their families.

"They need to be allowed to do family reunion, they should be given permanent protection."

"There are people who have arrived who were separated from their family. This disrupted their settlement experience, understandably, because they are very focused on [reuniting] with their family," she said.

"Others who actually have arrived have their whole family connections here, and ready to move on."

Sohail Azizi is one of the lucky people. In the most recent turmoil, Mr Azizi and his family were among the first to be evacuated. His father, already an Australian citizen, had been staying with Mr Azizi for several months prior to Kabul's collapse.

"[My father] was very worried, that's why he never left. He came just to visit us, but on a daily basis when things got worse I used to tell him to leave. He said, 'I can't leave you guys'," Mr Azizi said.

He said his evacuation experience progressed incredibly quickly. He received an email from the Department of Foreign Affairs and Trade (DFAT) on August 12, three days before the fall of Kabul.

The email asked if he and his family wanted to evacuate and asked for some relevant paperwork, which Mr Azizi filled in.

Two days later, he received a response asking them to go to the airport.

On August 16, Mr Azizi and his family arrived at the Kabul airport. He described the experience as "chaotic" and "challenging".

"I had three kids, and [shots were fired] to reduce the crowd … and hand grenades [tactical grenades] were also thrown," he said. 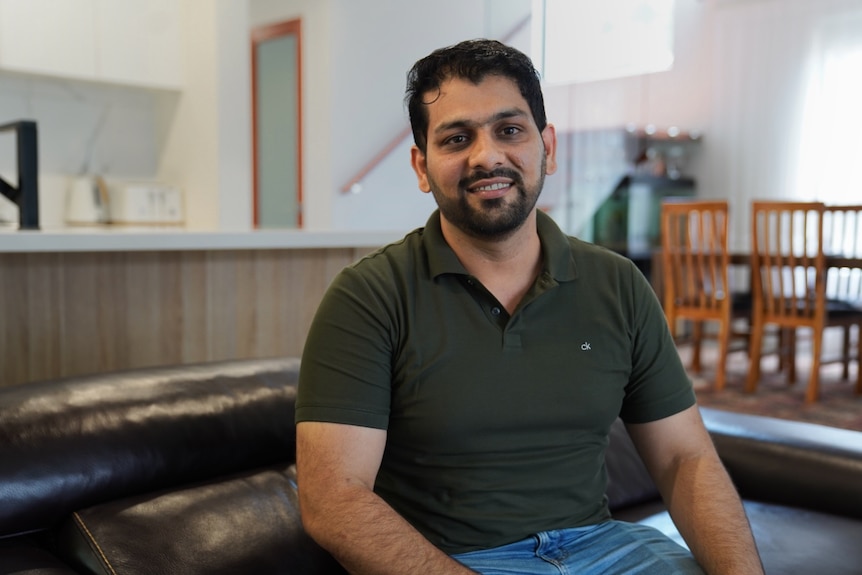 Despite having no visa, the authorities helped Mr Azizi submit his application at the airport, where they stayed overnight waiting for approval.

The next day, their visa application got approved and they were on their way to Dubai airport.

"I was very much lucky, by getting the visa in less than 24 hours. So for me, it was quite unbelievable for some time that I've come to Australia because it happened very fast."

Mr Azizi said he is happy his children's future is secure in Australia, but he knows what he had to leave behind.

"We came with one pair of clothes, no more than that — documents, everything was left behind."

He said he has settled comfortably in Australia because of his family's support.

"My family have been the backbone since the day I came here living with them. I haven't felt anything as a challenge because whatever it is we come together as a family and it fades away."

Mr Azizi said while he escaped the chaos of Afghanistan, he still faces daily challenges in trying to adapt to a new environment and find a job.

"The challenges start after arriving in Australia because it's always difficult to restart everything. You're coming from one side of the globe to another side." "People who apply as a refugee are forced to apply. Ordinary people are not migrating — it is the urban educated, the workforce who cannot find space for them in the new government under the Taliban," he said.

Dr Khalidi said the settlement experiences for people from non-English-speaking backgrounds differ on all levels.

"In Afghanistan, we have netted families. The family unit work very closely together and when there is separation, the husband and wife come apart, the children come apart," Dr Khalidi said.

He said raising Afghan children in a vastly different cultural environment also has its challenges.

'I realised I needed to grow up faster' Fahima Ahmadi says many Afghan families in Australia are heavily reliant upon their children because of language and cultural barriers.(ABC News: Glen Armstrong)

Fahima Ahmadi, a young Afghan Hazara, can relate to that.

The 18-year-old high school student said on top of the language barrier, her main settlement challenge has been adapting to a new education system.

"As a person who was born in a country where there was only one computer at school, it was really hard for me to use technology," Ms Ahmadi said.

She said she also struggles with understanding her own identity.

"I was brought in as a refugee in Iran. But I was known as an Afghani in Iran. But when I went to Afghanistan, because of my Iranian accent, I was called an Iranian, or a traitor in public spaces. And [Australians] would consider me as an Afghan from Afghanistan, raised in Iran, and who will become an Australian in two years."

Her father came to Australia in 2011, leaving behind his wife and children in Iran.

"That was a time when I realised I need to grow up faster in order to support my family," Ms Ahmadi said.

"My priority at the age of eight was to help my mum wrap chocolates to earn a living at night while doing my school commitments and also dealing with the discrimination that I used to face every day in Iran." Eight years later, her family was accepted into Australia and arrived in the country in 2019.

As a young Afghan girl, she faced unique settlement challenges — something she said is common among young Afghans and yet largely ignored within the community.

"In Afghan communities where there would be only one child, everyone would be dependent [on] that person. For that [young] person, the pressure and the mental health [toll] they would suffer is insane.

"My father had to support us when we were in Iran and he didn't get the opportunity to learn [English]. And when we came to Australia, my older sister and I were the only children in my family who could speak English and make that connection."

Despite the difficult situation in Afghanistan, Ms Ahmadi said she wants to enter politics.

"Witnessing the situation and the living conditions of those people whose only crime was being born in Afghanistan, I [decided] to become a politician," she said.

The ABC sought comment from the Department of Foreign Affairs and Trade (DFAT) regarding Mr Azizi's visa situation.

DFAT did not answer direct questions and referred the matter to the Department of Home Affairs.

"As the Foreign Minister announced in September, Australia will contribute $100 million in humanitarian assistance to respond to the Afghanistan crisis from 2021-24," DFAT said in a statement.