“No sex until we get our rights back!” Pro-Abortion in the US 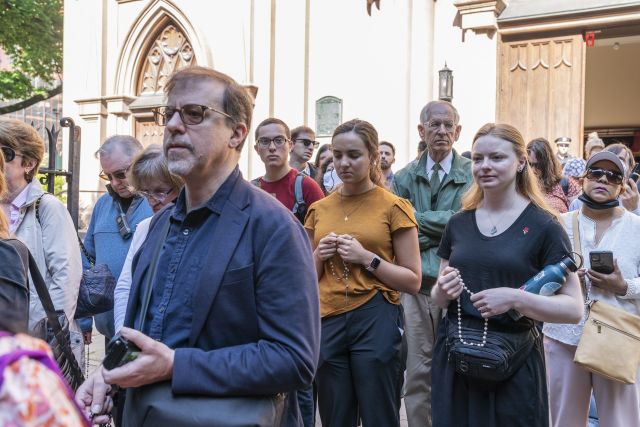 On June 24, the US Supreme Court struck down the constitutional right to abortion. Now decisions about their legality must be made at the state level. In many of them, abortion will be prohibited. This decision provoked mass protests in the United States. It has gotten to the point where feminists are urging women to give up sex until the decision is reconsidered. The Supreme Court, meanwhile, has already thought about revising the license for same-sex marriages.

The decision of the US Supreme Court cannot be called sensational. Almost 2 months ago, Politico published a draft of the judges' decision, which outlined the June 24 decision. The publication of the draft sparked massive protests against Supreme Court judges across the country, which are now ongoing.

The right to abortion — is one of those politically significant discussions in the United States between conservatives and liberals that continues without small for several decades. In 1973, the US Supreme Court during the consideration of the case “Roe v. Wade” recognized abortion as a fundamental right of US citizens.

A new consideration for the right to abortion began after Texas passed the “Heartbeat Law” — Abortion is prohibited from the moment the fetus has a heartbeat (about the sixth week after conception). This law was challenged at the federal level, and the proceedings reached the Supreme Court. The Supreme Court eventually reversed its own 1973 decision.

Then the judges decided that the right to abortion is guaranteed by the constitutional right to privacy. The new decision states that the constitution does not mention or protect the right to abortion. In many states, abortion will now be banned. In 7 states, legislation from 1973 retains abortion bans that were blocked by a Supreme Court decision. Now these restrictions will not be. Another 13 states passed abortion bans in case Roe v. Wade was overturned. In Louisiana, South Dakota, Kentucky, and Missouri, the bans are already in place.

According to the American Guttmacher Institute, 26 states “surely or probably” prohibit abortion.

How did the US react to the decision?

The decision of the Supreme Court provoked a celebration among conservatives and massive protests among liberals.

Former US President Donald Trump called the event “the great victory of life.” His former Vice President Mike Pencecalled on all states to ban abortion.

In turn, US President Joe Biden opposed the decision. He called it “a tragic mistake that takes the country back 150 years.” He pledged that his administration would do everything possible to protect women's right to travel to states where abortion is legal and to ensure that they have access to abortion pills and contraceptives. Some large American companies have announced that they will pay their employees to travel to other states for abortions if they work in places where abortion is prohibited. These include Starbucks, Tesla, Airbnb, Netflix, JPMorgan Chase and Reddit.

Pro-abortion activists are taking initiatives of varying degrees of madness. For example, they propose to arrange a nationwide sex strike, writes Breitbart. “No sex with sperm donors until we get our rights back!”, — it quotes the slogans of one of the radical feminists.

A 24-year-old woman protesting the New York Supreme Court decision told the New York Post that she would not have sex with men unless they wanted a vasectomy. “If you're a man who doesn't want to have a vasectomy, even if it's reversible, and you don't take to the streets fighting for my rights, you don't deserve to have sex with me,” she said, — .

< p>The police were forced to increase security measures near the homes of Supreme Court judges in early May, when a draft decision leaked into the public space. And, it seems, not in vain. At least one person was detained because of the preparation of an assassination attempt on one of the conservative judges. The 26-year-old California resident said he went for it because he was outraged by the published decision.

What can the Supreme Court's decision lead to?

Experts believe that abortion may become a key card for the Democrats in the upcoming elections. The Biden administration has so far suffered a complete collapse in terms of the economy. If the presidential election took place right now, Biden would have lost to Donald Trump with a score of 44% to 49%, according to federal polls. However, more than 85% of Americans support the right to have an abortion under certain circumstances. 61% of Americans believe abortion rights should remain legal in their current form, Pew Research poll says.

More importantly, Biden, after the congressional elections, may begin to reform the institution of the Supreme Court. He and other Democrats are not satisfied that now the Supreme Court, in which judges hold office for life, is now actually under the control of conservatives — 6 out of 9 members of the court adhere to conservative views. This was made possible by the fact that Trump replaced three — judges during his presidency, two elderly Conservative judges who voluntarily retired, and one liberal judge who passed away.

Biden wants to expand the composition of the court to 13 people, putting on 4 new seats of their candidates. This would once again give the Liberals an advantage in court. However, he can pull off such a truly tectonic reform (the number of members of the Supreme Court has not changed even once in the entire history of its existence) only with the full support of Congress.

For Democrats, this approach may be the only solution, because the Supreme Court, apparently, has set its sights on overturning its other liberal decisions. As Supreme Court Justice Clarence Thomas said in a written opinion, the Court now “should review other similar decisions that protect Americans' rights to contraception, same-sex relationships, and same-sex marriage.”