University administrator Michelle Trebilco found her creative side at age 50 when she was preparing for a Lady Gaga concert.

While assembling a costume for the gig, she came up with the idea of putting a Barbie doll head on a ring.

"All my weird artwork stemmed from there," she says.

More than a decade on, Ms Trebilco has a loyal following in her local community and online, where she is known as "Veteran Vamp". Every day except for her "day off" on Monday, you will find her dressing up in elegant or eccentric op shop creations because "why not dress up?"

"I do kitsch clothes, I do costumes, I do classical, I do punk – I will wear anything that interests me," she says.

"I am just fascinated with what I can do, the outfits I can create." 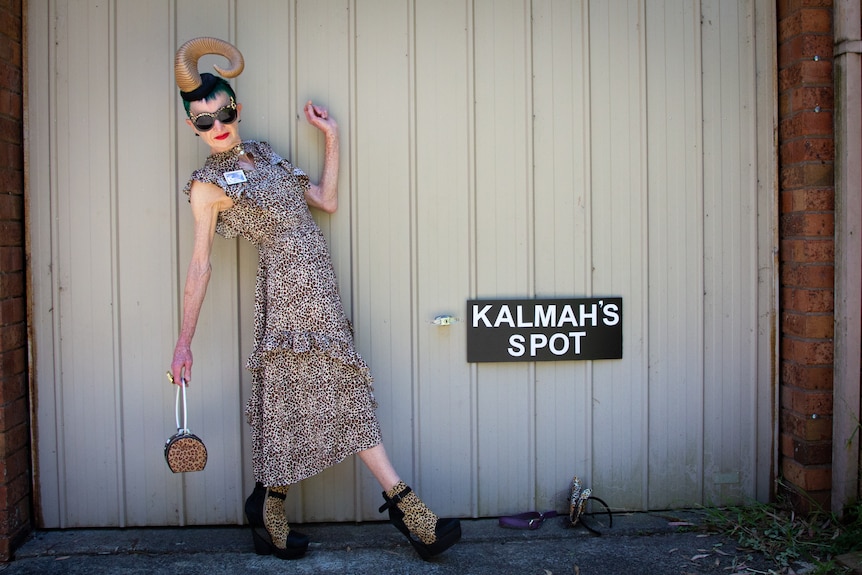 Michelle Trebilco says the garage is her studio and the driveway her catwalk.(ABC Radio Melbourne: Matilda Marozzi)From outfits to artwork

Ms Trebilco calls herself "an editor".

She collects clothing, toys and bric-a-brac from op shops and curates them to create sometimes glamorous and often eccentric ensembles. She has learnt to sew "a little bit", making dresses from skirts or handbags from old telephones.

"Now I look at it not so much as an outfit but as an artwork."

Although at first her ensembles were a private pursuit, she was convinced to start posting photos on the I love to Op Shop Facebook page.

After an overwhelmingly positive response she made her own page Veteran Vamp – A Thriftilicious Fashionista in 2018.

"I was stiff as a board at first," she says.

"I've learnt so much since I started posting outfits." 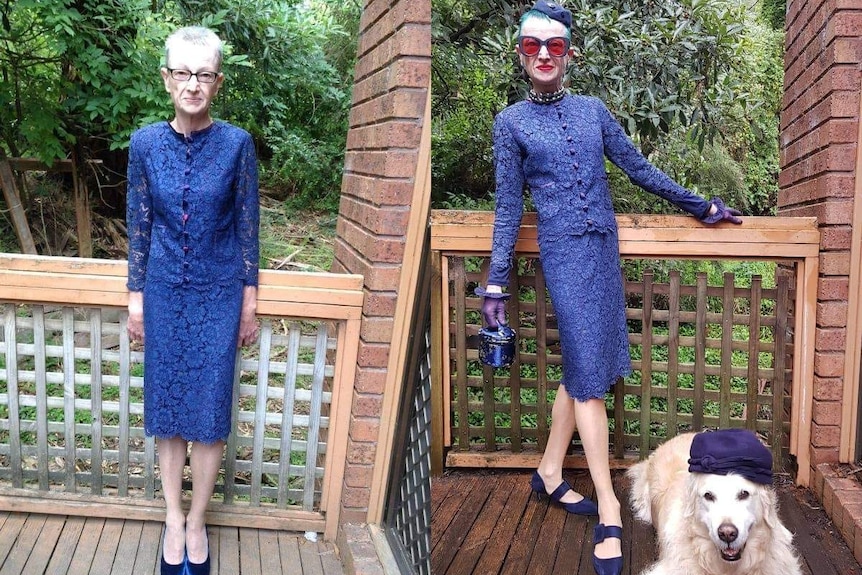 Over the years Ms Trebilco has developed her own style and confidence, to the point that some people ask if she is a professional model.

"But if they think I am a model that means anyone can do it."

Her Facebook page now has more than 11,000 followers, primarily in Australia and the United States.

Ms Trebilco says she keeps posting her outfits to entertain others.

"When people tell you that you've helped them through lockdown, I mean … that is why I continue.

"To be told I bring joy to their lives is so much nicer than just being told you look fashionable."

At first, her golden retriever Kalmah incidentally appeared in photos and went on to become a big part of the Veteran Vamp brand with her own hats and style.

The dog died in October and is still acknowledged with a sign in Veteran Vamp's online photos.

"After having Kalmah in my life, and the joy, the love, the entertainment that she brought to it, I knew I couldn't go on without another dog," Ms Trebilco says. "Matisse is a bit of a monster it seems so at the moment," she says.

"I'm hoping he will start modelling accessories but I won't be forcing that on him now.