Kevin was ready to sign a contract on a $400,000 house. Then he drove around the neighbourhood

With an asking price of about $400,000, it looked to Kevin Pattemore like a worthy investment for what would be his first home.

"I went and had a look and checked it out and I was pretty much sold on it," the 39-year-old said.

"I'd expressed my interest that I was going to make an offer."

The property was a modern, elevated townhouse close to tropical bushland on the fringes of Greater Darwin.

But unbeknownst to Mr Pattemore, it was one of 18 homes whose owners had been warned by the government to evacuate in the event of a cyclone just six months earlier.

All of the homes had been built by the same builder, using the same design and as part of the same government-backed affordable housing scheme in the Palmerston suburb of Bellamack.

However, instead of experiencing the great Australian dream, many of those who moved into the homes watched anxiously as their properties became increasingly riddled with problems.

What started as cracked tiles, rusting fittings and water infiltration later became so serious that the government began demolishing some of the homes late last year.

The drastic action was taken after a government-commissioned engineering report — obtained by the ABC — warned that some of the properties could be at risk of collapse during extreme weather. 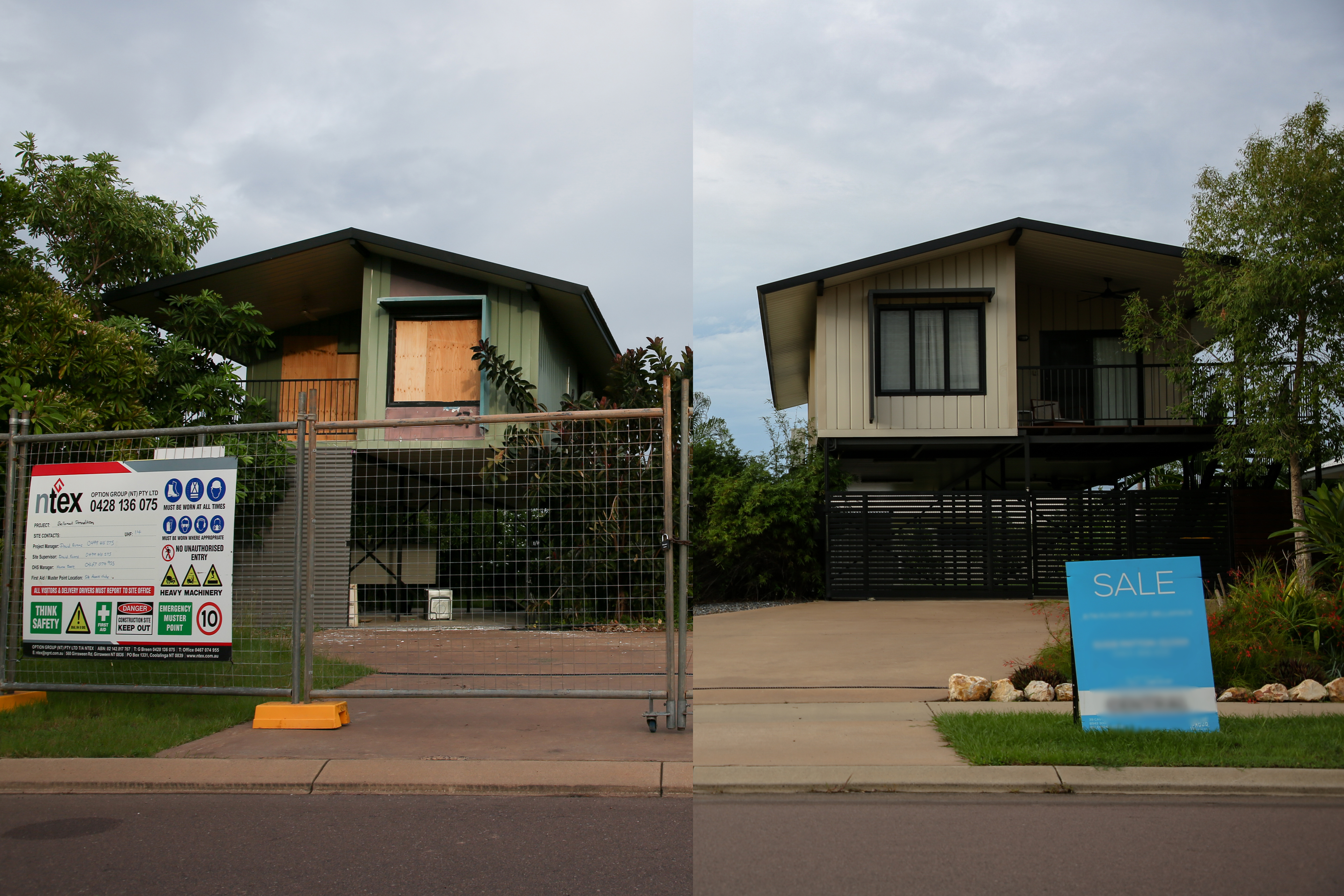 The government has ordered the demolition of some of the houses, but one was recently put up for sale, as shown in this composite image.(ABC News: Jesse Thompson)

"It is a terrible situation when you buy a home in the Northern Territory and then you find out afterwards that it is not up to the National Construction Code," Infrastructure Minister Eva Lawler said last November as the demolitions began.

However, as Mr Pattemore contemplated signing a contract, he had no idea about the cyclone evacuation advice issued to residents.

His experience, and that of an investor who recently went ahead and purchased one of the Bellamack homes, has raised questions about whether the government has done enough to warn prospective buyers about its knowledge of potential safety risks in the building sector.

Some homes demolished, others still occupied

The 18 Bellamack homes have had a troubled history ever since they were completed by builder George Milatos and developer Bellamack Pty Ltd, both of whom have denied responsibility for the issues.

Teams of inspectors have combed through some of the properties, which all used a design known as the Titan Building System, before identifying various defects.

But the fate of each dwelling has rested on a complicated tangle of bureaucratic rules. The houses were built in pairs in the Palmerston suburb of Bellamack.(ABC News: Michael Franchi) Residents dealt with various issues in some homes for years. This home was later demolished.(ABC News: Jesse Thompson)

Ten of the properties — which were completed in 2012 — were eligible for a government insurance scheme called the Home Building Certification Fund (HBCF).

Acting on engineering advice, the government began bulldozing most of those homes in mid-November.

Some houses are being rebuilt with the fund, while other owners are being paid out.

The other eight properties were completed the following year and are subject to a different insurance policy, known as Residential Building Cover (RBC).

None of those homes is being demolished.

Instead, five of the eight owners have lodged insurance claims for funding to help repair the issues, which the government says have been communicated to residents.

The ABC has seen a government-commissioned engineering report into the five homes, which was handed to the government last August, warning the properties posed a risk of serious harm to occupants from "structural failure from high winds or high wind gusts".

"It is not possible to predict the complex failure of these houses with any certainty in any high-wind event," the report said.

The report's authors also concluded that internal corrosion in some parts of the buildings they examined would probably continue, leading them to become "more severely dilapidated". Owners of the homes, including this one which is now demolished, complained of issues for years.(ABC News: Jesse Thompson) There was extensive debris and rusting at one of the homes pegged for demolition.(ABC News: Jesse Thompson)

It turned out that the property Mr Pattemore was interested in was one of the three remaining homes whose owners do not have an insurance claim lodged under the RBC scheme.

Therefore, it was not specifically assessed by the engineers and the extent of any potential issues is unclear, but it was built at the same time and under the same scheme as the others.

'It wasn't until I started digging around'

When Mr Pattemore went to inspect the property for a second time, he took along a family member who worked in the construction industry.

That person, who he said had previously been asked to repair some of the other Bellamack homes, recognised the house and warned Mr Pattemore to turn his back on the deal.

"It wasn't until I started digging around that I found all these articles coming up in the news and all these previous problems with them," Mr Pattemore said.

But the prospective buyer remained interested in the property and contacted the two most recent owners, who he said outlined an extensive list of improvements and repairs they had undertaken.

"All of the problems that were there, as best as they could find, they replaced, repaired and fixed," he said.

It is not known if the structural issues identified in the other homes were in need of rectification in the house Mr Pattemore inspected. The owner of the home declined an invitation to comment.

Mr Pattemore soon made an offer on the home — and, at that point, he received what's called a building status report. Kevin Pattemore made an offer on the home and received a building status report.(ABC News: Jesse Thompson)

According to a government spokesperson, those reports — which are based on property documents held by the government — can alert people to defects in problematic homes.

However, the document Mr Pattemore was handed, seen by the ABC, identified no non-compliance issues in the government records.

Instead, the 39-year-old was only turned off buying the home after he decided to drive past some of the other properties built as part of the same scheme, shortly before he was due to sign the contract.

"I noticed [that] of half a dozen of the other houses that were built by the builder, two of them were fenced off and boarded up and condemned," he said.

"There was another couple that people were still living in there, but they had Acrow props holding up the verandah.

"That's when I decided, 'You know what, it's just too much risk for me so I'm pulling out'.

"I didn't end up signing the contract." Building reports are based on government-held records and can alert prospective buyers to issues in houses.(ABC News: Jesse Thompson)

However, someone did buy another one of the three homes that had not been assessed by engineers.

Land title records show the transaction settled on November 15 — the same day the government started demolishing some of the other Bellamack homes.

An investor signs a contract

Susan, who only wanted to be identified by her first name, was looking for an investment property to add to her portfolio when she came across a listing for the house in Palmerston, an area with rental yields she found appealing.

Like Mr Pattemore, she inspected a building status report which, she said, only turned up some minor electrical issues.

The Sydney-based investor was impressed and signed a contract on the $403,000 property. Some of the houses are now reduced to rubble.(ABC News: Jesse Thompson)

However, she said she only learned about the full extent of issues related to the Bellamack homes after being contacted by the ABC.

That is despite a government spokesperson saying any new owners of the homes had been notified of the potential safety issues.

She said she was "very surprised" the government had not been more proactive.

"I didn't hear anything from the government in terms of [if] I had to get an engineering report or there were issues with the building."

In its written reply days out from Christmas, the agency confirmed the government had not received engineering advice in relation to Susan's home, that it was not covered by either of the insurance funds and that the previous owner had been told they may wish to seek independent engineering or legal advice.

Susan said she believed the current tenants had been informed of the cyclone protocols and said she could only rely on the building status report and the BAS letter when it came to the status of her property.

The government spokesperson said they were unable to comment on individual circumstances and again said all current home owners had been advised of potential issues. The demolitions took place throughout November and December, and some homes will be rebuilt.(ABC News: Jesse Thompson)No red flags in government records

The ABC has accessed publicly available land title records for the eight homes that are still standing.

Like the building status report Mr Pattemore saw, the records provided no red flags for prospective buyers, despite the engineering report raising non-compliance issues with five of them.

The land title records for the other 10 homes — which are managed by a different agency — explicitly stated that they were subject to an insurance claim for potential non-compliance issues.

A government spokesperson said the RBC scheme was overseen by a bureaucrat called the Commissioner of Residential Building Disputes, who only "deals with disputes between two parties".

"Any information provided as part of an application process, such as an engineer report, is used as information to enable a decision to be made for a monetary order or rectification work," the spokesperson said in a statement.

Successful RBC applicants will receive up to $100,000 to repair their homes, despite engineers warning in their report that the nature of the issues would make rectification works "very difficult" to comply with relevant construction codes.

Commissioner Sandra Otto said she did not have the power to order the demolition of homes. Many of the former houses are now vacant blocks.(ABC News: Jesse Thompson)

Asked why there was no disclosure about non-compliance issues in the building status reports for the RBC homes, the government spokesperson said: "Under the building legislation, the owner is responsible for ensuring that buildings are compliant."

In 2019, the ABC revealed several buyers had purchased units in apartment blocks that the government already knew were non-compliant, but had yet to make their findings public.

Following the revelation, Chief Minister Michael Gunner said those buyers should have been given full disclosure.

"There should have been, in our opinion, greater transparency around this," Mr Gunner said at the time.

Mr Pattemore said if he hadn't done his own checks, he would likely be living in one of the houses by now.

"I would've felt pretty alone and in the dark, knowing that, if I've signed a contract and purchased something, and didn't get enough checks and inspections done on my own, that I probably wouldn't have a leg to stand on later on if I had to tackle these issues," he said.

"I think [the government] have some sort of due diligence that they should pass on to future prospective buyers to make them aware of any past issues that have been in these houses, instead of people having to do Google searches and look on Facebook to find out themselves the hard way."