It’s America’s most documented crime. But a year after the Jan 6 attacks, something strange has happened

It took less than an hour for a peaceful yet passionate political rally to become one of the most documented crimes in American history.

Tens of thousands of Donald Trump's most ardent supporters marched on and breached the US Capitol, turning the seat of American democracy into the scene of an unforgettable felony.

The only other time the Capitol's defences have been breached was in 1812. That attack was carried out by British troops.

This time, it was orchestrated by the country's own citizens.

It was surreal to be a reporter covering the invasion as it unfolded.

To label the moment as simply a spontaneous eruption of anger, fuelled by an election result some refused to accept, would be naive at the very least.

This moment had been simmering for years.

The combined ingredients of anger, rhetoric and lies had simply reached boiling point, creating an unprecedented juncture in American history. As hundreds of people stormed the building, the Capitol was locked down and it took several hours for it to be secured.(Reuters: Stephanie Keith)

A mob, mobilised by Donald Trump's false claims of a stolen election, stormed the seat of American government to keep him in power through violent means.

In the hours and days that followed, Americans in large part expressed shock, outrage and embarrassment of the actions of Trump's most passionate following.

The condemnation on both sides of Congress was swift. Even Trump's own party criticised his actions that day and demanded he bear responsibility for the bloodshed.

It should have been a reset moment for a country at war with itself. But a year on, the undercurrent of fear remains.

Some within Republican circles have sought to bury the events of January 6 and those in power at the time are yet to face any real punishment for their actions.

Since March, the share of Republicans who think it is very or somewhat important to find and prosecute those who broke in and rioted that day has slumped from 79 per cent to 57 per cent, according to Pew Research.

Senior members of the Republican party have consistently contradicted themselves over how the former president should be held accountable, if at all. 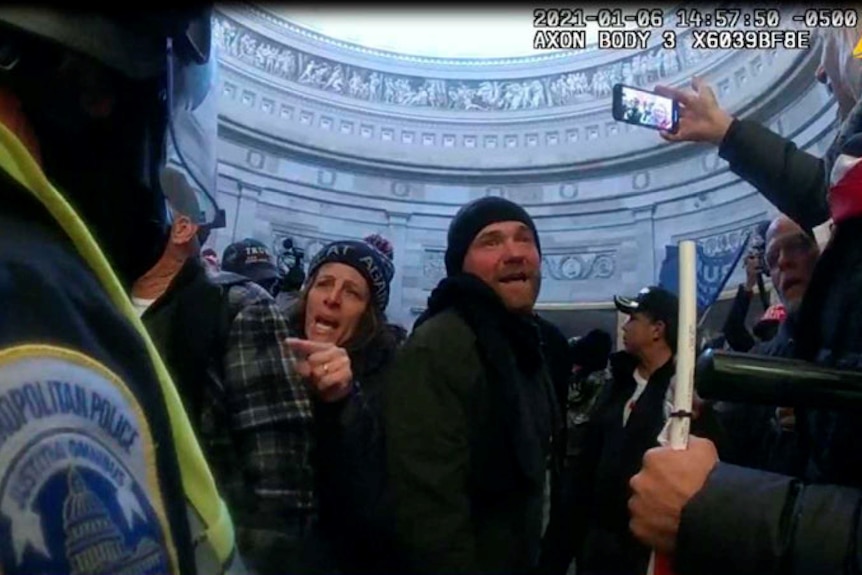 Video and images were taken by journalists, Capitol police and rioters themselves during the assault on Congress. (Justice Department via AP)

A legion of conservative activists, media personalities and elected officials have in the months that followed systematically sought to rewrite history.

Despite reams of clear video and photographic evidence streamed live that day by the invaders themselves, some have described it as a choreographed attack staged by left-wing provocateurs Antifa.

The tear gas was still being fired and rioters cleared from the Capitol grounds when that line started being fired at journalists like me.

When that argument didn't stick, the armed insurrection became a good-natured protest spoiled by a few troublemakers.

Or instead of a deadly event that put the lives of hundreds of politicians, police and congressional staffers at risk, the riot was no big deal at all.

Some congressional staffers live in fear

In the months since, senators, representatives and police officers defending the building that day have chronicled the trauma.

Congressional staffer Sharon Nichols went into her office that day to get her COVID-19 vaccine. When the Capitol came under attack, she hid out in her office for eight hours alone.

She finally managed to escape by using the underground tunnels connecting the House and the Senate.

"I walked outside and it was like the world had changed. It looked like our country was at war," she said.

"I do worry sometimes that it's so out of control that they could influence the next big election.

"I would be a fool to say it would never happen again."

Recognition of the events that day though hasn't stopped the steady stream of staff resignations, with many left uneasy about the thought of another attack.

But a year on, its own Inspector General has criticised the agency for only implementing a quarter of his 200 recommendations to help prevent a similar attack in the future.

Those in the force and others held captive that day in the Capitol halls have quit in droves.

Among the hundreds of Capitol Hill police officers overwhelmed during the insurrection was officer Harry Dunn. "Nothing has been done to prevent what happened on January 6 from happening again," Capitol police officer Harry Dunn says. (ABC News)

"Nothing has been done to prevent what happened on January 6 from happening again," he said.

"We have to proceed with caution, and we need to be very careful and smart over how we proceed, to make sure this doesn't happen again."

The threats to democracy displayed last January haven't dispersed or changed or diluted.

They have simply morphed into different forms, which are being expressed in spot-fire fashion at a local level across the country.

"The ingredients are still there," Harry Dunn said.

"Nobody wants to say this is America, this is what we represent, these are the values, but it is.

"It's irresponsible to deny the existence of that culture … and denying its existence is kind of how we got to where we are now."

The insurrection didn't become a moment of truth that helped stitch the fabric of society back together — rather, it frayed the edges.

The percentage of Americans who say violent action against the government is justified stands at 34 per cent, according to a Washington Post-University of Maryland poll.

That's considerably higher than past polls dating back two decades, and the numbers are again partisan.

Four in 10 Republicans say violence is sometimes justified. That compares to two in 10 Democrats.

While it appears unlikely Washington DC will play host to another armed contest in the near future, what's happening at school board meetings is a concern to many. US school board meetings have become scenes of fierce arguments and sometimes even violence amid debates over vaccines and critical race theory. (Reuters: Evelyn Hockstein )

They have become a visual manifestation of the tensions still bubbling under the surface.

Members of the Proud Boys, the far-right nationalist group that led its men and women into the US Capitol, have started appearing at town council gatherings, school board presentations and health department Q&A sessions.

Their presence at community events can be seen as an effort by the militia group to bring their brand of politics to a grassroots level.

Twelve months on from one of the most significant assaults on American democracy in living memory, the government is still under attack.

The offensive is just quieter now, but no less menacing. It's eroding the country from within.

The fundamental right to vote is under siege. Republican states moved en masse within weeks of the 2020 election to make it harder to cast a ballot.

Faith in the electoral process is fading; the "big lie" about Donald Trump's supposed 2020 victory has continued to gained currency.

The undertone of distrust runs deep into almost all facets of American society, it just depends which version of reality you believe, or which cable news channel you watch.

Faith in democracy, which was tested on January 6, hasn't been restored in the months that have followed. Instead, it continues to slip away.

The Justice Department (DOJ), which is leading the criminal investigation, is yet to announce any major breakthroughs in untangling the planning of the attack, nor lay any blockbuster charges.

Close to 700 rioters been charged for their involvement but those in power at the time and within Trump's close circle have so far proved untouchable.

The House Committee, established in July to investigate what caused the event to unfold, is on a tight deadline to uncover new details.

If they don't reveal any explosive new information before the mid-term election season starts this year, they risk having their recommendations thrown out if, as expected, Republicans reclaim control of the Senate. 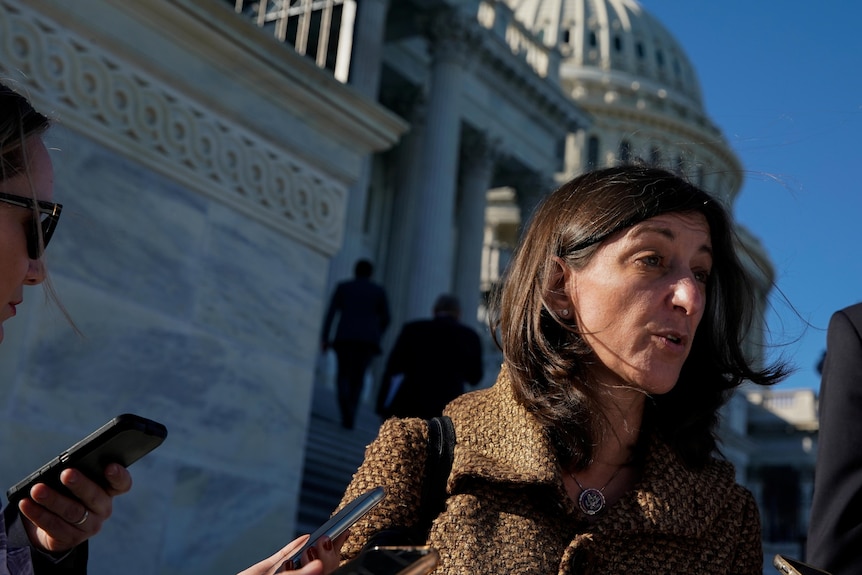 Congresswoman Elaine Luria is one of 13 selected to sit on the committee.

While the DOJ is responsible for the criminal proceedings, she admits pinning down those in power at the time has so far been fruitless.

"I am fearful that there are those who will try to bury it," she said.

It's difficult to imagine what new details the committee could possibly uncover: the most important moments of that fateful January day were broadcast and live-streamed as they unfolded.

But even that wasn't enough to change the minds of millions of Americans nor restore confidence in democracy. Polls show the majority of Americans are losing faith in the strength of the nation's democracy. (Reuters: Erin Scott)