‘It helped me feel that I belong’: Stolen Generations family finds healing and success through art

Gumbaynggirr woman Melissa Greenwood and her mum, Lauren Jarrett, know what it is like to go through hard times.

They hail from the Gumbaynggirr, Dunghutti and Bundjalung tribes of the New South Wales' east coast, where Ms Jarrett is a survivor of the Stolen Generations.

She was taken from her family at Bowraville on the NSW mid-north coast in 1966 when she was nine years old and placed in Cowper Orphanage, near Grafton.

"It was like the end of the world. You have no idea what's going on, you're not really told anything. It's devastating," she says.

"You're just taken away from your loved ones, put in a car with strangers.

"In those days they had nuns with those long habits and big crosses, and head pieces; and I had no idea where I was or who they were. I had never seen a nun before.

"It was overwhelming … anything to do with your culture was banned." Lauren Jarrett was taken from her family in 1966 when she was nine years old and placed in an orphanage.(Supplied: Lauren Jarrett)

Ms Jarrett was released from the orphanage aged 18.

"When I left, I went looking for family and that was amazing, finding everyone again," she says. Ms Jarrett was taken from her family when she was aged nine.(Supplied: Lauren Jarrett)

"Mum had a nervous breakdown … much later I found that out, I think because we all came back to find her that helped."

Ms Jarrett, now aged 63, went on to have two daughters and a son, and raised them as a single mum.

Her daughter says when she was growing up things weren't easy and they moved in the region between Nambucca Valley and Brunswick Heads.

"Mum and all her 13 brothers and sisters were impacted by the Stolen Generations," Ms Greenwood says.

"My nanny lost her 14 children to the Stolen Generations.

"Because of what Mum went through it impacted us heavily growing up.

"We grew up below the poverty line and struggling with her trauma, and then inter-generational trauma that was passed down. It was really difficult." Melissa says she and her mother started to paint and weave together and the business took off.(Supplied: Melissa Greenwood)

It was that struggle that pushed Ms Greenwood — a mother of two boys, aged one and five — to strive for more.

"That's something that's been really intrinsically linked to my resilience and my strength," she says.

"It's something that drives me and pushes me to have a better life for myself and my family." Ms Greenwood was inspired to start an art business with her mum, which they called Miimi & Jiinda (meaning mother and sister).

The business is thriving and has turned their lives around.

"It's just stemmed from me really wanting to see my mum happy and to give her a bit of confidence and get her out in the world and see her beauty.

For both mother and daughter, the art has helped heal past trauma and provided an outlet for them to share their deep connection to their culture. "It has helped me really grow and thrive and build my self-confidence," Ms Greenwood says.

Ms Jarrett says the work has helped her to find her place and also brought her closer to her children and grandchildren.

"It's been amazing because we had to live on country and paint together … it's been a real healing journey," she says.

"It helped my spirit to grow strong, helped me grow as a person, helped me feel that I belong."

Painting from the heart Ms Greenwood says she paints from the heart, inspired by her connection to the land.(Supplied: Melissa Greenwood)

Ms Greenwood says she 'paints from the heart' and enjoys using bright creations to reflect their stories as Aboriginal women.

"Mum raised us to be very culturally strong and culturally proud," she says.

"A lot of the artworks I do are inspired by my connection to my ancestors, to my culture and to my people.

"It's just that loving heart energy, that Gumbaynggirr energy."

'Giving back to community' 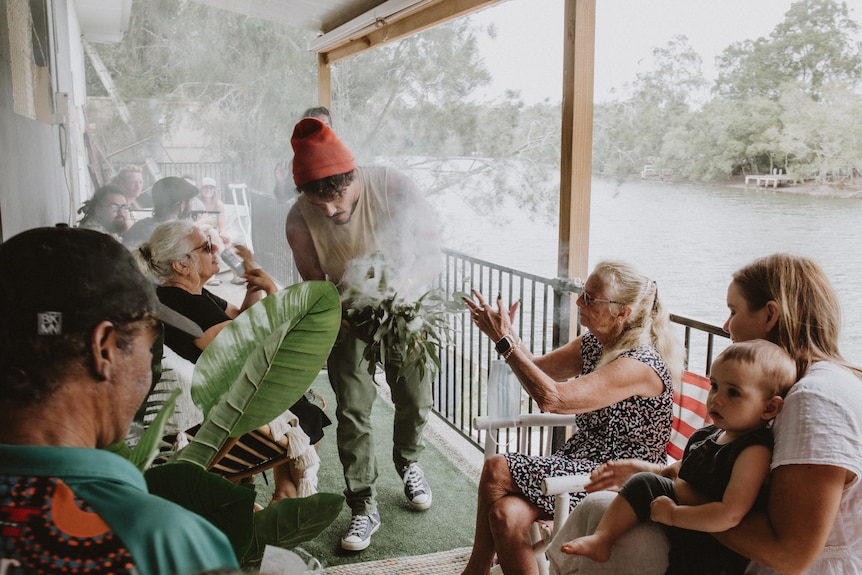 A smoking ceremony was held to cleanse the shop at the opening of the new Ochre store at Urunga.(Supplied: Melissa Greenwood)

Recently the business expanded into clothing and homeware brand, Ochre by Miimi and Jiinda.

It includes a store at Urunga, near the pair's hometown of Nambucca Heads.

"So now we have a shop and I have my family working in there and I am able to give them opportunities," Ms Greenwood says. "At the Ochre store, our goal is to create employment and self-determination for local Goori mob.

"We are able to give local grassroots Aboriginal organisations donations from sales that we have, so it's a core value of the business, giving back to community.

"We also stock other Indigenous brands."

Ms Jarrett says it is great to also share knowledge.

"I go out and do weaving with the language and cultural centre at Yarrawarra, and other community stuff," she says.

Ms Greenwood has written and illustrated a children's book.

Titled, 'Miimi Marraal, she created us, you and me', it is due to be published later in the new year.

"It's something I'm extremely proud and excited about," she said.

"Being a Miimi [mother] myself, this latest project has been very dear to my heart.