Bernadette Schiller will never forget the sound of the impact.

The moment, an ear-splitting boom, that Douglas Crabbe rammed his road train into the Inland Motel near the base of Uluru, leaving a trail of casualties under his cab. Crabbe's atrocity at the Inland Motel in 1983 rocked the Territory.(Supplied: Northern Territory Library and Archives)

Nor will the horror of the incident's immediate aftermath ever escape Ms Schiller's mind.

"There was just people screaming everywhere. It was just dust, debris, blood.

"It was like a bomb exploding. It was like, terrifying. I can't even describe the terror of that night."

A 20-year-old Ms Schiller was living at Uluru — where construction was underway on the resort township of Yulara — and working in another hotel, far from her upbringing on a NSW sheep station.

What happened that night changed the trajectory of her life forever. It set her on a course of ongoing medical treatment, and, in later decades, serious post-traumatic stress disorder symptoms.

It was about 1:30am. She'd just knocked off work and was sipping her first beer.

"Somebody yelled something out, and I was at the jukebox, and I sort of glanced out the window expecting to see someone maybe peeing on the tree. And there was just a truck coming straight at us," she recalls.

"There was no time to react or do anything. It was so close. "But he was gearing down and revved it up, and straight through the Inland."

Crabbe's reaction to being kicked out of the pub for intoxication was a blind act of extreme terror.

It resulted in the deaths of five people: David Seng, 24, Adrian Durin, 21, Helen Fuller, 22, Patricia Slinn, 45 and Leslie McKay-Ramsay, 35. Many others were seriously wounded, including Ms Schiller, who recounted being trapped under the bulbar and found herself "peeing blood" for six months due to internal bruising.

The Northern Territory Police officer-in-charge at Uluru station that night was Mark McAdie.

"It was a scene of absolute carnage," Mr McAdie, now retired and living in rural NSW, reflects.

"You can imagine: he'd driven his truck into what was a crowded bar, at a hotel. And it was a very small bar as well, the actual room that he drove into was only about two, two and a half times the size of the prime mover that he'd driven into it. 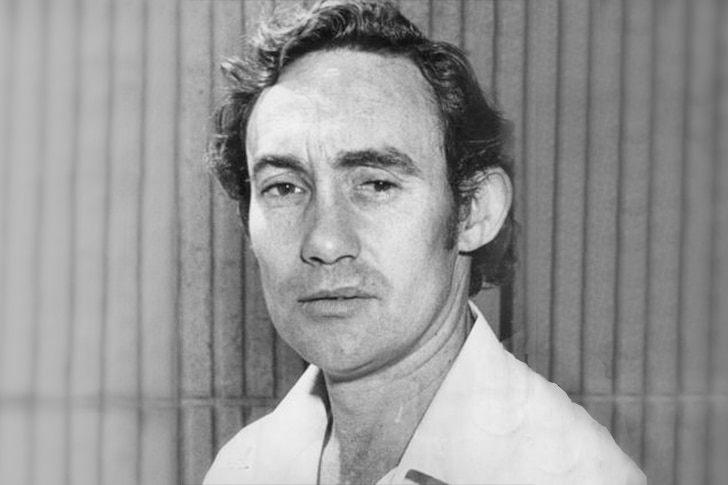 Douglas Crabbe killed five people when he ploughed into the Inland Motel at Uluru in 1983. He's up for parole in 2022.(ABC News)

The 36-year-old truck driver fled the scene on foot but was tracked down the next day at the Yulara construction site. He was subsequently charged with five counts of murder, found guilty, appealed, went to retrial, was found guilty again, and has now been in prison for more than 35 years.

His family declined an interview request, but have previously said publicly they believe he's done his time and should be able to spend his last years of life surrounded by his children and grandchildren.

Some of the survivors, however, believe Crabbe should never be allowed to set foot in society again.

"He robbed five people of a future, their families of grandchildren," Ms Schiller said.

"He totally destroyed families … I really do feel he should stay in prison until he dies. There's no coming back from what he did. Five people were killed after Crabbe drove his truck into the Inland Motel.(ABC News)

"I don't believe he's ever shown any remorse. And I don't care if he behaves himself in prison, he shouldn't be allowed out, ever."

Mr McAdie, who before his retirement had risen through the ranks of Northern Territory Police to become assistant police commissioner, said he also believed Crabbe had failed to show sufficient remorse.

"My personal opinion is, I have not seen any real expression of remorse from Douglas Crabbe," Mr McAdie said.

"And I think one of the first things that should happen before his parole is a true expression of remorse. He's always attempted to minimise his culpability in this particular event.

"He's up there amongst the greatest mass murderers in Australia."

Crabbe is currently behind bars in Acacia Prison, near Perth in Western Australia, where he was transferred to from the Northern Territory to be closer to family members in 2005.

It will be WA's legal system that ultimately decides whether Crabbe walks free or not.

The WA Prisoners Review Board has confirmed Crabbe's next parole review will be in July, 2022. One police officer who was there in the aftermath says "it was a scene of absolute carnage".(ABC News)

However, regardless of their ruling then, the final decision rests with WA's Attorney-General, John Quigley, who has the power to quash the board's findings and keep Crabbe inside.

In a statement, a spokesperson for Mr Quigley did not directly answer whether he would intervene to reverse the board's findings if they were to allow Crabbe parole.

In considering Crabbe's bid for freedom, the parole board must "regard the safety of the community as the paramount consideration", the spokesperson said.

"The board may also take into account matters raised by any victims of an offence, including any matter raised in a victim's submission."

For those still nursing the scars of Crabbe's Inland Motel atrocity, like Ms Schiller, they can't accept the notion of the mass murderer ever being allowed to walk the streets.

"It would be beyond devastating if he was to be released," Ms Schiller said.

"Like, I already don't sleep, but I think if he was released it would be just terrible. I think you'd always have it in the back of your mind, and be worried, 'Where is he? What is he doing?'

Ms Schiller said she would make a submission to the parole board against Crabbe's release.

In making their determination in 2022, Ms Schiller wants the board to remember that Crabbe's not the only one who received life sentences from that night.

It's that sound, that roaring blast, that will haunt her memory for as long as she lives.