‘I haven’t received any CVs in one and a half years’: The worker shortage left behind by international students

Sunnybank on Brisbane's southside is one of the city's most multicultural suburbs, brimming with restaurants from a plethora of global cuisines.

International students are one of the key demographics in the area, with a university nearby and the local food scene providing a sense of familiarity and reminding them of home.

Freya Ostopovich from the Sunnybank Chamber of Commerce said it was common for students to work casual jobs in the area while studying.

But since the COVID-19 pandemic struck, 37,595 international students have left Queensland, stripping local businesses of their casual workforce.

"In 2020 it wasn't that noticeable because the restaurants were shut down for quite a while, but gradually the staff started falling away as students had to go back overseas," Ms Ostopovich said.

Sunnybank's restaurants and cafes have bounced back post-lockdowns, and some businesses have reported being busier than they were before the pandemic began.

"This year, it's not lack of customers or being shut down. It's actually finding the staff to serve, which is the problem," Ms Ostopovich said.

Family filling gaps in the roster

Cafe owner Cam Lu lost nearly all of her staff during the pandemic, going from a team of five to now having just one person on her roster. 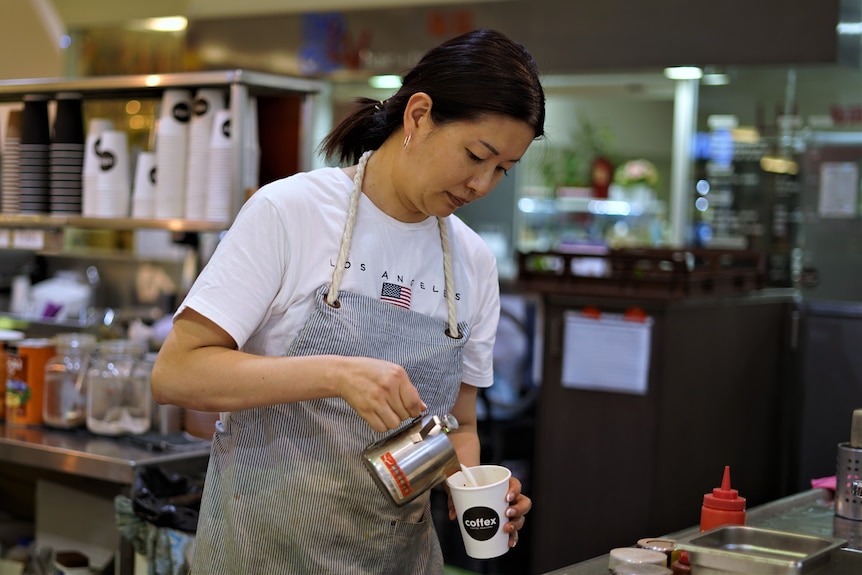 Cafe owner Cam Lu lost nearly all of her staff during the pandemic.(ABC News: Jessica Rendall)

"Two of my Chinese students, they went back to China because of the COVID outbreak and they're not coming back," Ms Lu said.

"And then one of my baristas was so scared his family called him back, so he went back to Taiwan.

"Ever since, I haven't received any people dropping CV's for nearly one and a half years."

The situation has become so dire even Ms Lu's family had to pitch in.

"At the lowest point, my mother-in-law had to come in. She was 74-years-old, she had to do dishes for me. That was hard," she said.

Her husband who works full time has also had to spend his weekends helping out at the cafe with their 12-year-old daughter.

"It was crazy, but we pulled through and we never closed a day, we just try our best to serve the community and of course, keep us going because we still have all these overheads we had to pay, so it was very difficult." As director of his business, Henry Leung, usually handles paperwork but has found himself doing more hands-on tasks during the pandemic. (ABC News: Jessica Rendall)

For larger businesses like Henry Leung's chain of yum cha restaurants, a helping hand from family members was not quite enough to keep the business going.

"We are short about 40 per cent of staff, because there are no students, no working visa [holders]," Mr Leung said.

As director of his business, Mr Leung usually handles paperwork but has found himself doing more hands on tasks during the pandemic.

"We haven't got any washers, nobody can do the dishes. If there are no staff, I wash it myself," he said.

Students to return in a staggered approach When the borders open to international students, they will still have to complete two weeks of quarantine at the Wellcamp Regional Quarantine Facility near Toowoomba.

The state government has also flagged a proportion of the first lot of students returning must study at universities outside of Brisbane and priority will be given to medical and health students.

Tourism Minister Stirling Hinchliffe said the plan was "the first phase of scaling up from semester one and seeing more students return to Queensland over time".

Mr Leung said the staggered approach could see businesses suffering for even longer.

"We don't know how many international students will come back and there are so many job openings to fill across shops, restaurants and factories," he said.