Claude AnShin Thomas has walked a literal path from war to peace.

As a teenager, he joined the US Army and was sent to fight in the Vietnam War.

Now, Claude is a Buddhist monk and renowned teacher of sitting meditation.

"On the one hand, I am who I am because of what I have done, where I've been," he tells RN's Soul Search.

"At the same time, my life is committed today to bring an end to all war, all violence — and I do believe that's possible."

Since immersing himself in the Zen Buddhist tradition, Claude has come to see the roots of war, violence and suffering as internal, not external.

"They exist in each of us individually and it is our responsibility to wake up to that," he says.

An inevitable path to war

"My father recommended that I go into the military because it would help make a man out of me, help me learn discipline," he says. 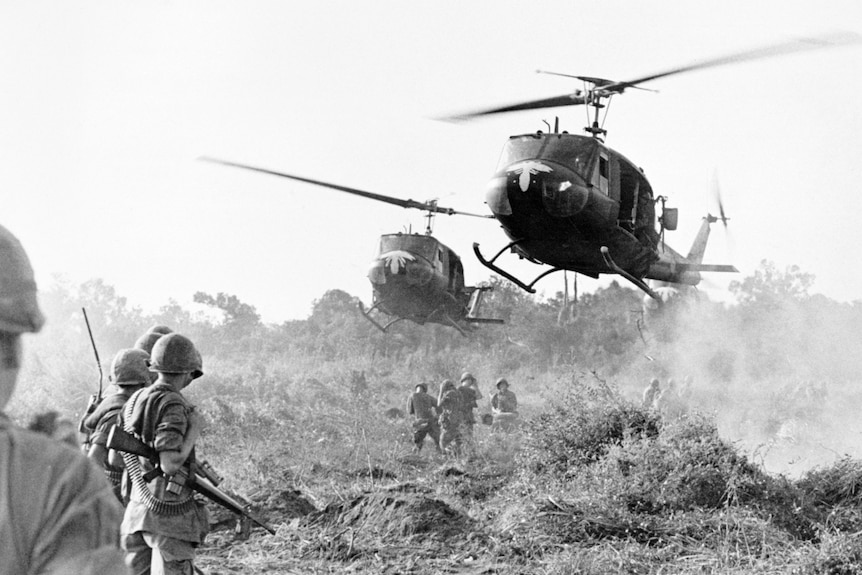 Claude's father never spoke about his own military service, apart from "innocuous, romantic stories", and never acknowledged the impact the war had on him.

But Claude saw how inner turmoil — and an inability to know what to do with it — took a toll on his father's existence.

"He turned to alcohol, tobacco — he smoked 50 to 60 cigarettes a day — and he had a horrible diet," Claude recalls.

After entering the US Army, Claude served as a helicopter gunner and crew chief in Vietnam.

He was shot down five times, and upon being medically discharged at 20 years of age, he was the recipient of numerous medals and a Purple Heart.

"I volunteered to go to war because I was under the impression that it was my responsibility," Claude says.

But that wasn't his only motivation.

"[I thought] if I went to war and served honourably, when I came back home, the jobs would be available to me, women would just love me and be falling at my feet."

"Everything would be provided for me because I'd be a national hero."

One year in Vietnam

Claude had never even seen a helicopter before his first day in Vietnam, when he was assigned to be a door gunner on assault helicopters.

"I was completely naïve, really unprepared for the responsibilities that I had," he recalls.

"I was looking for airplanes that were going to attack us. The Vietnamese didn't have any airplanes, but I didn't know that." Claude says he was unprepared for his role as a door gunner on assault helicopters.(Getty Images: Stocktrek Images)

Claude's first day in the unit was supposed to be a "soft" introduction — some non-combat flying to pick up and deliver mail, and transport people.

But when they were back at the barracks, his crew chief ran up to him and said: "We have to go."

"I was so afraid, I was so overwhelmed," Claude remembers.

"I remember coming out of the flight line and watching them rinse blood out of helicopters from people who were shot, wounded or killed."

Claude describes his return to civilian life in the US as chaotic. It wasn't heroic like he'd imagined.

He experienced years of unemployment, social isolation, violence and addiction.

The ABC's Religion & Ethics portal is home to reporting on religion, ethical discussion and inspiring stories of faith and belief.

"I felt dirty, defective," he says.

"I felt my bones were wrapped with barbed wire and every time I turned in any direction it just cut me."

Claude says that he carried — and still carries — the responsibility for much death and destruction, and the burden of moral injury and post-traumatic stress.

"I am not disordered," he says. "My relationship with the world in which I live makes absolute sense based on the truth of my life and my combat service.

"We who served in combat are morally wounded, we're injured, because what we're being asked to do is a betrayal of everything we've been conditioned to believe is correct and right.

"I'm not a good or a bad person for what I did, but I am responsible."

The unexpected path to peace

It was a social worker who directed Claude to a meditation retreat. He was sceptical at first, but then something clicked when he was on the retreat.

"They were just asking me to sit down and become still, to carry that into my life and see what reveals itself to me," he says.

"I can't even remember exactly what was said, but I can remember what I heard was a truth I had known since I was 10. After committing to the practice, Claude began his training under the Vietnamese monk Thich Naht Hahn, then the Zen peacemaker Bernie Glassman.

This led to his full ordination as a Zen Buddhist monk into the Japanese Soto Zen tradition in 1995.

Why Jane Goodall still has hope for humanity Amid a changing climate and the COVID-19 pandemic, Jane Goodall shares her life lessons on hope.

Sitting meditation is now a crucial discipline for Claude, who — 40 years ago — could barely stay out of jail or go anywhere without a handgun.

"I haven't done anything in particular, except stay disciplined in my commitment to sit just to sit, to walk just to walk, to eat just to eat, to work just to work," he says.

The practice has also helped Claude process the impact of war on his body.

He says he hasn't been able to sleep for more than two hours at a time since 1967.

Claude no longer sees "healing" as being able to sleep soundly, without nightmares, but rather learning to accept that "how I sleep is just how I sleep".

"Healing is not the absence of suffering. It's learning to live in a more conscious and active relationship with that suffering," he says.

Through the Zaltho Foundation, Claude teaches zazen (sitting meditation) to civilians and combat veterans and spreads a message of active nonviolence, transformation and change.

"I encourage people to sit just to sit," Claude says.

"If we're looking to get something from it, then what actually is revealed to us through the process, we won't see it, we'll miss it.

"This process is not about getting good, it's about waking up." Claude says "peace has the opportunity to reveal itself" during meditation.(Unsplash: Daniel Mingook Kim )

And it's through this practice that the Vietnam veteran has come to better understand peace.

"Through my willingness to be still, to focus on the foundation of life — which is one breath followed by one breath — peace has the opportunity to reveal itself to me, as it will in each successive moment."

"Peace is not a static reality."

A beginner's guide to sitting meditation

Claude advises that anyone seeking to engage in sitting meditation should look for a group, to provide support, and a teacher from a long-standing tradition, to provide guidance.

Below are some of the basic instructions he delivers whenever he leads a meditation.

"It doesn't really matter what you sit on," Claude says.

Whether you're on a chair or bed, the floor, a cushion or a bench, the important thing is to "establish a solid base of support – three points of contact."

Keep your hips forward and your chin in. Your ears should be in line with your shoulders, your nose with your navel. Your head should not be leaning to the left or right, forward or backward.

"If you want to sit with your eyes closed, be careful not to fall asleep," Claude cautions.

Claude's instructions for the hands: "We take the back of the left hand, we place it in the palm of the right, and we rest that on our thighs with our thumb tips nearly touching."

"Nearly touching because when we are distracted from the essential point which is breath awareness, our thumbs will touch."

"It's a subtle reminder … to come back to an active relationship with our breath."

Breathe in through the nose and out through the mouth, and breathe deeply into the abdomen.

When breathing in, Claude says, "we do not follow the breath into the body. We rather pay attention to the precise point where the breath enters the body."

When breathing out, "we do not follow the breath out of the body, but rather we pay attention to the precise point where the breath leaves the body."

You're invited not to move.

"To not fidget, to not give way to the random notion that you need to scratch your head or brush your cheek or something," Claude explains.

However, if feelings of discomfort continue or get stronger, feel free to move "with the conscious awareness that it affects the space where you're sitting."

RN in your inbox

Get more stories that go beyond the news cycle with our weekly newsletter.

Your information is being handled in accordance with the ABC Privacy Collection Statement.Email addressSubscribe