From much-loved vintage varieties to the latest makes and models, his Sunshine Coast workshop is an Aladdin's Cave of sewing machines, overlockers, and the parts needed to fix them.

And during the COVID-19 pandemic, he has seen a substantial increase in demand for their repair.

"I got absolutely hammered for about a year with different machines," he says. When Mr Potts left school and first started work, training as a sewing machine technician happened on the job.

"Nowadays it's a little bit more formalised but very, very difficult to get into," he says.

"It's a formalised trade with aspects of electrical, aspects of fitting and turning, and all sorts of engineering involved."

Early in his career, Mr Potts worked on vintage machines from the 1870s and 1880s.

"They had what we used to refer to as the bullet bobbin, which is a bobbin that is very long and it does look like a bullet, nice and sharp if you manage to run one across your fingers," he says.

"Probably the oldest I see now are machines that were manufactured in the 1920s and they're not uncommon, there are still quite a few of them around."

While he does repair the more commonly known "treadle" machine that people might remember their grandmother using, Mr Potts says they are actually still made today.

"There are a lot of countries around the world where electricity is an issue, so if you were to wander through villages in Africa, as an example, or India you'll see a lot of treadles still being used," he says.

Not all machines are created equal

After more than 40 years in the industry, Mr Potts embraces the challenge of fixing older machines.

"I can do them all — but the ones that we enjoy working on are the ones where you have to use your brain instead of putting in a circuit board," he says. Mr Potts has been repairing machines like this one from the 1950s for more than 40 years.(ABC Sunshine Coast: Annie Gaffney)

"The ones that are coming through nowadays are working on mainly electronics, they're not worrying so much about mechanical machines that I tend to specialise a little bit more in."

He finds machines made in Germany the most difficult to repair.

"The German manufacturing process seems to find a way to put 60 parts into an area where the Japanese process will put 20," he says.

"That makes them very complex — it does make them reliable, but also when something goes wrong it is a lot more problematic to fix."

Mr Potts says there are up to five sewing machine repairers working on older machines on the Sunshine Coast and possibly up to 200 across Australia. Mr Potts says most of his clients are women, but 5 to 10 per cent of men sew too.(ABC Sunshine Coast: Annie Gaffney)

He is pleased to see a whole new generation taking up sewing.

"There are a lot of younger people now taking it up and so we've got sewing for practicality, making clothes, creativity, a lot of embroidery, a lot of quilting," he says.

"That's really nice to see because it's how they're designed to be used rather than have them sit in the cupboard for years at a time."

Most of his clientele are women, but he estimates about 5 to 10 per cent of men sew.

"Generally speaking the male that I deal with though is the male who has tried to fix the wife's machine," he says.

"They're the males I don't like to deal with because often I get told how to fix it.

"I figure there's a reason they brought the machine to me." 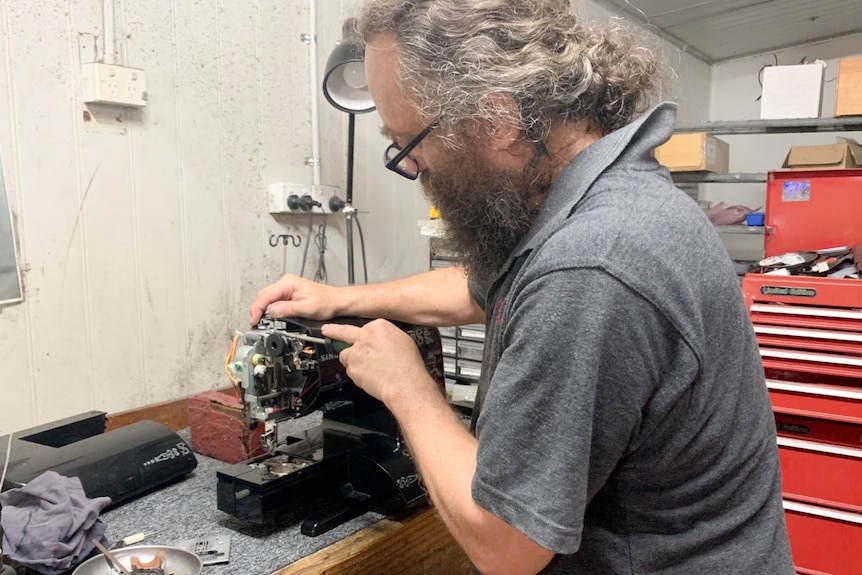 Mr Potts says parts are still available for sewing machines that are up to 50 years old.(ABC Sunshine Coast: Annie Gaffney)

Like many other trades and industries during the pandemic, Mr Potts has been affected by a global supply shortage of parts.

It's an issue he has been able to mitigate by using parts from the wrecked machines in his Sunshine Coast workshop.

"Because I'm a specialist technician my interest is in fixing the machine — whereas a retailer who perhaps sells machines and repairs them is often more interested in trying to sell you a machine."

Mr Potts says the best way to avoid your sewing machine ending up in a workshop is to use it.

"Every month or so, get it out and run it for a minute — you don't have to do anything with it," he says.

"We just want to turn the belts over, turn the gears over, and distribute the lubricants in there." 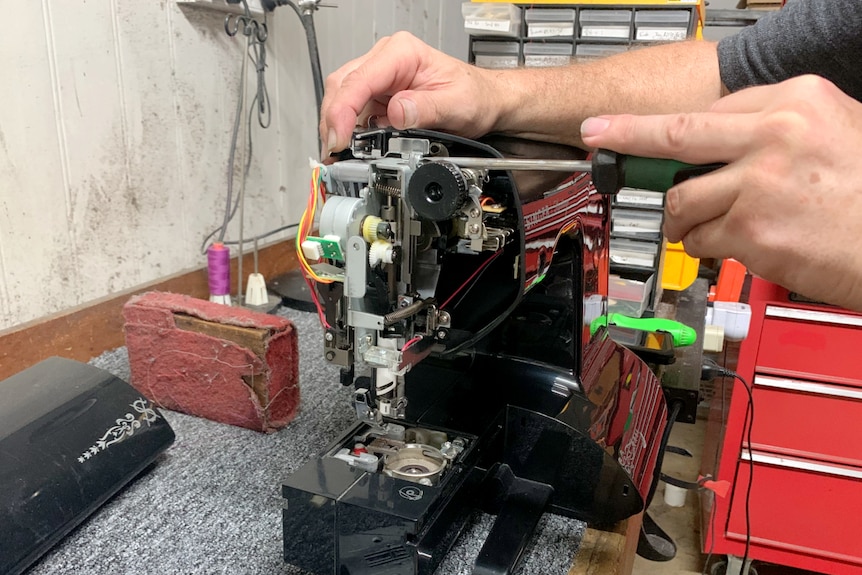 Mr Potts says the trade — with aspects of electrical, fitting and turning and engineering — is "very difficult" to get into.(ABC Sunshine Coast: Annie Gaffney)

It's advice Mr Potts has not yet adopted himself.

"I have an overlocker at home, which I looked at the other day, and realised it had seized because I hadn't used it for so long," he says.

"The last thing I want to see when I go home is a sewing machine."