On a red dirt runway in Ramingining, a fallen hero is returned to his people.

WARNING: Aboriginal and Torres Strait Islander readers are advised this article contains images of a person who has died.

The late actor's family has granted permission to use his name and image.

As the light aircraft carrying his coffin descended onto the tarmac, the late David Gulpilil Ridjimiraril Dalaithngu — the trailblazing Australian actor — was met with a scene of immeasurable grief and cultural fortitude by hundreds of Yolngu there to bid him farewell.

The body of the Storm Boy star was flown into the East Arnhem Land community, where he spent many years of his adult life in the north-eastern Northern Territory, on January 6. "It is an honour, and we are all happy that grandpa came back to home, with all the people we have here," said Gulpilil's eldest grandson, Lloyd Garrawurra.

"We're happy that he put Raminingining onto the map. Everyone, he taught us … he was a wise man, and it's important that he came back. What he did for us was the best."

As the plane door opened and bared his coffin, women hurled themselves onto the airport tarmac, wailing, as men danced, just as their famous countryman once did so dexterously as a teenager in his debut film Walkabout. Gulpilil's coffin was topped with bright flowers as his body was taken to the Gove District Hospital mortuary.(ABC News: Michael Franchi)

"He was a great, great dancer for us," Mr Wurrki Ganydjarr said.

"He was a great movie-maker. He did a lot of movies, and he did it for this community."

It was a long journey home for Gulpilil, who passed away aged 68 from a heart attack while undergoing treatment for lung cancer in regional South Australia late last year. Prior to his flight to Ramingining, his body was driven more than 3,000 kilometres through the outback from Victor Harbour to Darwin in the back of a hearse bearing the numberplates "AT REST".

In Darwin, he was met by dozens of mourners: family, friends, many of whom had shared experiences with this colourful, exceptional character during his unique life walking a tightrope between western and Yolngu cultures. The grief felt by Gulpilil's friends and family is powerful.(ABC News: Michael Franchi)

"Today is a sad day and a happy day, for dad to go home one last time from Darwin," Mr Marika said.

"[We'll] sing him the songline and send him back … where we're going is following the songline of the old man."

Clutched by crying pallbearers in a Darwin aviation hangar, the coffin was heaved onto a charter flight and farewelled from the Top End capital.

With Mr Marika and Gulpilil's son Jida onboard, the repatriation back to his traditional country in Arnhem Land had begun. 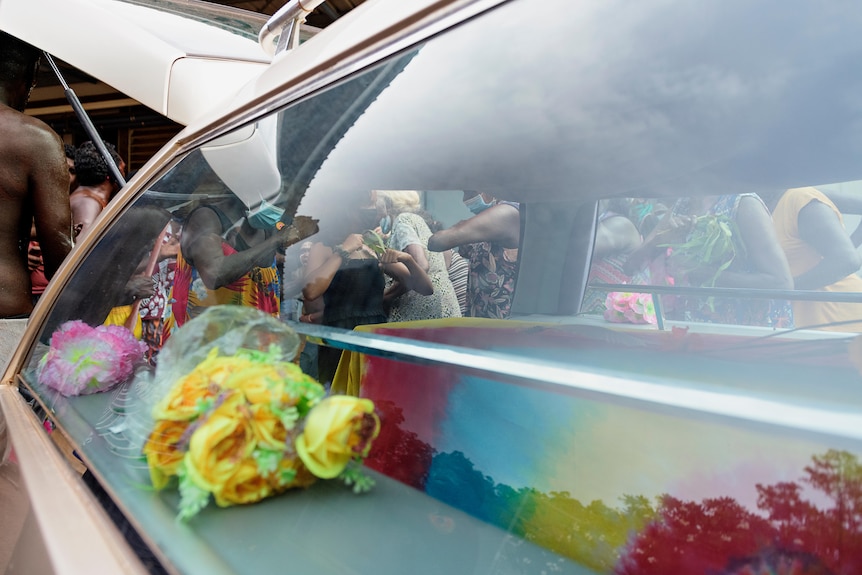 Soaring above Arnhem Land's myriad rivers and wetlands, the flight was like a final lap of honour for one of the region's greatest stars.

On Elcho Island, a crowd had assembled on the Galiwin'ku sports oval as the plane carrying Gulpilil's body circled overhead.

One figure held an enduring symbol of the actor's ongoing power — an Aboriginal flag.

"He's been more powerful than the government to fight for [Aboriginal] Australia, for who the land belongs to," said his grandson, Mr Garrawurra.

"Grandpa showed Australia who he is, where he's from, what his clan is … he didn't show it for nothing.

"He wanted to share it with Australian people and around the world." Gulpilil died from a heart attack at the age of 68.(Terry Trewin: AAP)

His son Jida Gulpilil said he believed his father would have been happy his final wishes were being carried out.

"Through his wishes of his journey back home, he's still educating the world about who he is, where he comes from, who his people are, the ceremonies, the tribes, the totems — all of those dancers represent his place, and help him be guided back home," Jida Gulpilil said.

While a homeland outside of Ramingining will eventually mark Gulpilil's final resting place, the heavy wet season rains make a funeral in the year's early months out there nearly impossible.

In preparation, Gulpilil's body was flown from Ramingining to Nhulunbuy and transported to Gove District Hospital on Thursday, where it will remain in the mortuary until the 2022 dry season in July when his traditional funeral is expected to begin.

As the flight touched down in Nhulunbuy, Gulpilil's body was met with respect and ceremony by some of the Gove Peninsula's most powerful clansmen. Rirratjiŋu clan leaders danced his coffin off the plane, while Gumatj clan chieftain and land rights legend Galarrwuy Yunupiŋu watched on from a car nearby.

Yirrkala resident Banbapuy Ganambarr said the ceremonies – accompanied by the beat of bilma (clapsticks) – were to "sing [Gulpilil] back to the sacred land". Gulpilil has been returned to his people in East Arnhem Land, before a funeral in July.(ABC News: Michael Franchi)

"He was a hero, in Yolngu way," Ms Ganambarr said.

"Because he was a model for all Yolngu to be heroes, to be famous.

"[But] it wouldn't matter if he was Australian of the Year or not – he was a lawman."

Backed by a procession of painted dancers, Gulpilil's coffin was sung into Gove hospital's morgue.

Gulpilil was finally home to stay in Arnhem Land – albeit, two months too late to have seen the waterholes of his father's country with his own eyes, one last time. Ceremonies were held to "sing [Gulpilil] back to the sacred land".(ABC News: Michael Franchi)