From surviving to thriving — this town is ready to boom again

The town that grew too fast a decade ago is racing into another boom cycle and wary community stalwarts don’t want to see mistakes of the past repeated.

One of those Gracemere residents who has lived through the ups and downs is Glenn Lynch, who owns a local BP service station.

He moved to the town near Rockhampton in 1964 and has seen it evolve from a few hundred folk into a thriving community of almost 13,000.

"I think this time things will be different.

"There is a lot happening with the Capricorn Highway, the Rockhampton Ring Road, Rookwood Weir, even Shoalwater Bay; we'll get a ripple effect from that."

The projects listed by Mr Lynch all have the potential to help transform Gracemere.

The Capricorn Highway upgrade will add four lanes heading to Rockhampton; the Rockhampton Ring Road, a project that will commence next year, is worth $100 billion and will generate 800 jobs; the Rockwood Weir water storage project is a $367 million undertaking; Shoalwater Bay will upgrade its military training area at a cost of $1 billion.

Development was so hectic in the last boom that in 2012, people in one subdivision were moving into new houses before Rockhampton Regional Council could install sewer mains.

It was forced to use vacuum trucks to remove the raw waste that was being temporarily contained in a large blue hose. It was an era when the town was one of the fastest-growing in Australia (it had an average annual population growth of 8.5 per cent between 2002 and 2015) and this surge led to a rush in home construction

Hundreds of houses built in a new area that ended up causing an oversupply which ultimately pushed the rental vacancy rate over 10 per cent.

In some cases, interstate investors, who had bought homes sight unseen — with a year and more of guaranteed rent built into the price — were suddenly under mortgage stress as the mining industry went into a downturn and workers left the area. 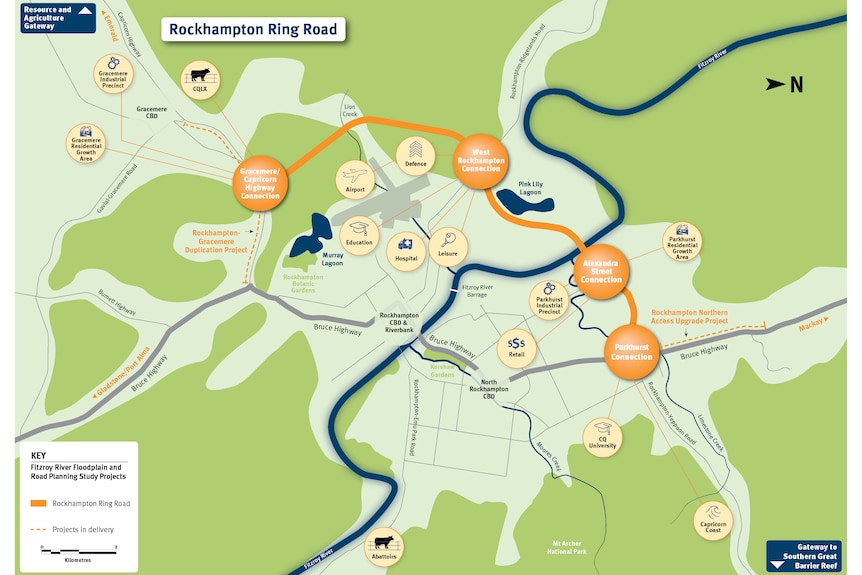 The $1 billion Rockhampton Ring Road project starts in 2022 and will improve connectivity to Rockhampton, Gracemere and Yeppoon. (Supplied by TMR)

Gracemere real estate agent Ross MacAlpine said that period was tough going for a pocket of investors who had paid over market value.

He said it wasn't just Gracemere that suffered; Mackay, Emerald, Bundaberg and Gladstone also fell victim to that type of investment marketing.

"The majority of the mortgage stress was because of those houses being sold so cheaply, so people can get out of debt, and that sent house valuations down," he said.

"But the market has recovered now through the supply and demand cycle and now there's huge demand for homes and Gracemere is back on the rise again.

"We are seeing investors coming back into our area for the first time in years. In the last six months I've sold houses to people from Canberra, Victoria, Sydney. They're coming back because our average rents now are getting close to $400 per week (for a 7 per cent return) where before it was about $300. This Gracemere home in Mamalis Court sold in November for $429,000.(Supplied: One Agency)

"It looks like pretty good times in front of us but, on the other side of the coin, we have people coming to the area to work who have got jobs but are living in their cars because they can't get accommodation."

Mr MacAlpine said as demand for new housing increased and new subdivisions opened, he wanted to see builders held accountable to ensure the focus was on providing quality houses over quantity.

"The council has no control over that whatsoever," she said.

"When an application comes before us for a subdivision, we've got to judge it on the subdivision and all the things that go with it.

'All the engineering, all the roads, all the conditions that are put on it; we can't condition what sort of houses they put up unless there is a covenant put on the estate.

"And that's normally by the builders. I think I'm right in saying that councils very rarely put a covenant on a subdivision anymore.

"So, when it's approved, it's up to the people that they've got the approval through to decide what standards of houses they're putting on that subdivision."

Ms Smith said Gracemere had a good mix of houses to suit a wide range of budgets and with large amounts of affordable land available it was primed for more significant growth. She said the council had invested heavily into Gracemere's infrastructure (water, roads and sewerage) in view of its development potential and to avoid the growing pains of 10 years ago while also enhancing lifestyle benefits with high-quality public space and activity areas.

She said the Gracemere Industrial Area employed more than 1,000 people now and was well positioned to attract more businesses to the industry precinct.

Local news direct to your inboxABC Capricornia will deliver a wrap of the week's news, stories and photos every Friday. Sign up here