For the first time in Kazakhstan, they told about members of a religious organization who staged pogroms

According to the Kazakh state channel Khabar in the evening the documentary film “Tragic January. How it was. For the first time, the name of a religious organization whose members took part in the pogroms was mentioned in it. We are talking about the radical cell “Yakyn Inkar”, banned in the Russian Federation, Kazakhstan, Kyrgyzstan, Uzbekistan and Tajikistan. In the countries of Central Asia, this radical organization, which is a wing of the Tablighi Jamaat movement, (also banned in the Russian Federation and the states of Central Asia) & nbsp; has settled since the beginning of 2010. What the followers of the cell are famous for and why they are recognized as an extremist organization, “MK” understood. 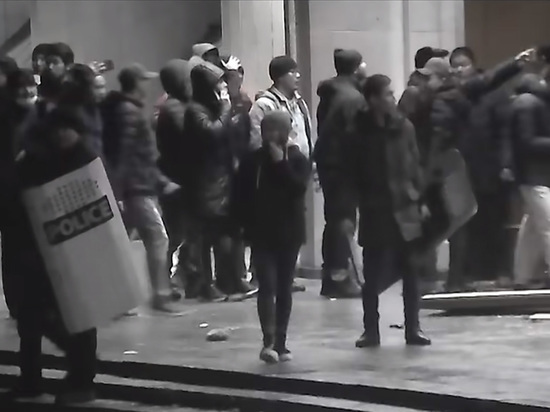 The Yakyn Inkar Movement, the literal translation of whose name is — "Negation of everything except God" — was founded in India in 1926. The followers of this movement preach the denial of all the blessings of civilization, calling for the norms of life of the time of the Prophet Muhammad. Cell members do not recognize health care, do not teach children at school. But this sect, in fact, is recognized as extremist in many Asian countries not for this. And for the fact that the adherents of this organization categorically deny the right to existence of other religions, which falls under the definition of religious extremism.

In addition, the followers of the movement do not consider it necessary to comply with the laws of the state. They also urge not to obey the muftiats and distort the norms of Islam, which is why it is considered extremist in the Muslim community. As Abdulaziz azhy Zakirov, the head of the Spiritual Administration of Muslims (SUM) of the Jalal-Abad region, spoke about them: “We are against the actions of those people who call themselves “inkar”, “yakyn”. and do the wrong things. This is not according to Sharia and not according to the laws. Just lie at home and do nothing, saying “God willing” — This is completely wrong. You need to work, try.

In Uzbekistan and Tajikistan, this movement has long been recognized as extremist, the activities of the cells were banned. But the adherents of “Yakyn Inkar” in 2012 managed to gain a foothold in the north of Kyrgyzstan – in Issyk-Kul and Naryn regions. Later, the ideas of the organization spread in Chui, Osh, Jalal-Abad and Batken regions, as well as in the cities of Tokmak, Bishkek, Kant, Kyzyl-Kiya and Osh. At first, people in long Pakistani robes, with uncut hair and beards, were looked upon as oddballs. But then, when more and more supporters began to appear and entire families and villages refused to send their children to schools, receive passports, use healthcare services and generally make contact with the state, the alarm was sounded in Kyrgyzstan. Moreover, it was precisely from the environment of poorly educated and unemployed youth that recruiters recruited “recruits” in ISIS (an organization banned in the Russian Federation, recognized as a terrorist organization) and other radical movements.

In 2017, the Yakyn Inkar movement It was recognized as extremist by the Oktyabrsky District Court of Bishkek. After that, detentions of its active members began in the country. In 2017, 32 members of Yakyn Inkar were detained in the Osh region. There are 16 more people in the next —  Many of them received 3-4 years in prison. Last year, their arrest just expired.

After the “Inkarovites” were taken up in Kyrgyzstan, they tried to move to Kazakhstan. But in the neighboring country they did not “take a closer look” for five years to the radicals, as it was in Kyrgyzstan. Already in 2018, the court of Astana recognized this organization as extremist, saying that its goal “is to create a caliphate in a single country, including on the territory of Kazakhstan, which involves a violent change in the constitutional order, a violation of sovereignty.” So this radical a cell in the country did not receive, being “strangled at the bud”,

However, religious scholars believe that “Yakyn inkar” cannot be fully considered a terrorist structure, rather – destructive. Because its adherents do not work, as a rule, have an untidy appearance, do not have education and do not recognize secular sciences, do not use transport, do not take money in their hands. “This group has certain signs of fanaticism and contradicts not only the traditional forms of Islam, but also the social order, national traditions and progress (science, culture). Therefore, by its nature, it is not extremist or terrorist, but has a destructive orientation, “»» said about them by a Kyrgyz theologian, an expert on religion, director of the analytical center «Religion, Law and Politics» Kadyr Malikov.

All this suggests that the adherents of “Yakyn Inkar” could participate in the riots, but the role of organizers and “shock forces” they definitely don't fit – not those fighting qualities.