‘First thing offenders do is go and talk to the horse’: How the Mounties bring a tactical advantage to crime fighting

They are the highly trained equine first responders whose canter is the equivalent to lights and sirens.

Even in this high-tech age, they provide a tactical advantage that can mean the difference between life and death for their human "partners" – like Sergeant Teala Muller.

One of nine officers assigned to the Queensland Mounted Police Unit (QPMU) – nicknamed the "Mounties" — Sergeant Muller has been riding shotgun with 750-kilogram Troop Horse Idol for the past decade.

They share a bond galvanised by a mutual trust and instinct.

"I feel so much more confident on the horse … there have been a lot of times in my general duties policing career where I have been in fear of my life," Sergeant Muller said.

"I love Idol because of the experiences where he has looked after me because I've been in scary situations … Idol has been there, he's been an amazing partner, phenomenal backup.

"They trust us, and we trust them with our lives every time we hop on them and take them out operationally," Sergeant Muller said. Idol is one of a dozen horses attached to the Mounties walking the beat in Queensland.

While they can be thrust into unpredictable jobs like pinning a drunken racegoer against a wall or chasing a reveller who slapped a police horse, they've avoided becoming the targets of violence like their southern counterparts.

Those attacks partly contributed to harsher penalties of up to five years in jail for assaulting a Queensland police horse or dog. Sergeant Muller said she recently stepped in to protect an officer "hammer fisted" by a protester in Brisbane's CBD. They were able to defuse the situation by pushing back the angry crowd from the roadway.

The horses will form a protective bubble around officers on the ground if a crowd turns.

"If we are in a situation with someone being violent towards police or members of the public, Idol comes in and he'll stand his ground and he just brings calm,'' Sergeant Muller said. "We have had occasions where offenders have ended up hugging the horses and calming down as a result.

"I have been a Mountie now for 14 years. I've never trampled anyone. I have never been aggressive with anyone. No-one's ever tried to attack me on my horse. I honestly believe that's just the way I communicate with people and the presence of my horse and the teamwork we have together."

No matter the job, they've come to expect the unexpected.

"I think the horses can sense our mood and sense our intensity and when jobs are on, our body language changes and how we engage with people and they sense that … it's a really special partnership that only comes with experience," Sergeant Muller said. The Mounties is the oldest unit in the Queensland Police Service with more than 150 years of tradition.(ABC News: Alice Pavlovic)

The protective relationship is reciprocated as Mounties continually assess risks to their horse – surfaces, noises, behaviour and structures.

"They give all their heart, they love their job. They know their job. They hear someone yelling and switch on and look at what is happening, like we need to go and investigate,'' she said.

As the oldest unit in Queensland police steeped in more than 150 years of tradition, the Mounties are an effective modern-day crime-fighting tool.

The horses perform a dual role of enforcers and pacifier — defusing and de-escalating volatile situations with their mere presence.

They also help locate missing people, patrol at schoolies and act as the eyes on the ground.

Space to play or pause, M to mute, left and right arrows to seek, up and down arrows for volume.WatchDuration: 2 minutes 9 seconds2m 9s When he took over as officer-in-charge in 2019, Senior Sergeant Paul Mason wanted to better balance the tight-knit unit's role of community engagement and maintaining officers' policing skills. "Over time I introduced proactive patrols – each of the staff have adopted a police station. So, they'll contact the officer-in-charge of the station and work out where their crime hotspots are and they actively go and patrol their hotspots," Senior Sergeant Mason said.

Subsequently, the Mounties are clocking up arrests for offences ranging from illicit drug supply and fraud through to dangerous driving and public nuisance.

"If you send through a normal patrol or a police vehicle into a location, they'll [offenders] be inclined to be a closed shop and not want to talk to police whereas police on horseback, and the first thing offenders do is go and talk to the horse. To break down those barriers, they're pretty amazing creatures,'' Senior Sergeant Mason said.

Each horse has their own personality

"Mo" hates fireworks and more recently possums after one tried to hitch a ride as he crossed a busy Brisbane road. However, his gentle side makes him the popular choice to work with terminally ill children.

"Mo will stand there and seems to be able to sense what's happening … for an 800-kilogram horse with a head bigger than most children, he will literally go to sleep with them, let them ride him. He is amazing,'' Sergeant Muller said.

Troop Horse Kokoda has a cheeky, kind, demeanour and can turns on taps to drink. He also untethers himself.

Space to play or pause, M to mute, left and right arrows to seek, up and down arrows for volume.WatchDuration: 25 seconds25s Police horse Kokoda has mastered how to turn on a tap for a drink.(ABC News: Paula Doneman)

Then there's Troop Horse Lance who loves a roll on the sand while on patrol and while Sergeant Muller is in the saddle.

Alfie, one of two new QPMU recruits, has been put through his paces in the training arena at the unit's complex in Brisbane's west. Under the watchful eye of Horse Manager Hannah Guise, Alfie is familiarised with objects that may otherwise spook him while on patrol.

The six-year-old Shire – a type of heavy breed preferred by the QMPU as they are less prone to flight – moved repeatedly through a curtain of tarps, eventually pushing through something he sees as a solid object.

The sensory training includes banging drums and rolling a beach ball around Alfie to get him used to objects near his legs – important aspects of the daily training designed to stop him from startling and bolting.

"Sometimes the horses may come to a position where they're a little apprehensive about traversing a level part of the ground or something and the rider is asking the horse not to worry about what they think is bad and they [horses] do it with flying colours," he said.

After three to six months of training, the horses are ready for patrols – building up to large events like Riverfire and Safe Night Precincts.

Suburban activities like a mower starting or a car backfiring pose as much risk as a cornered offender when it comes to spooking the horses. 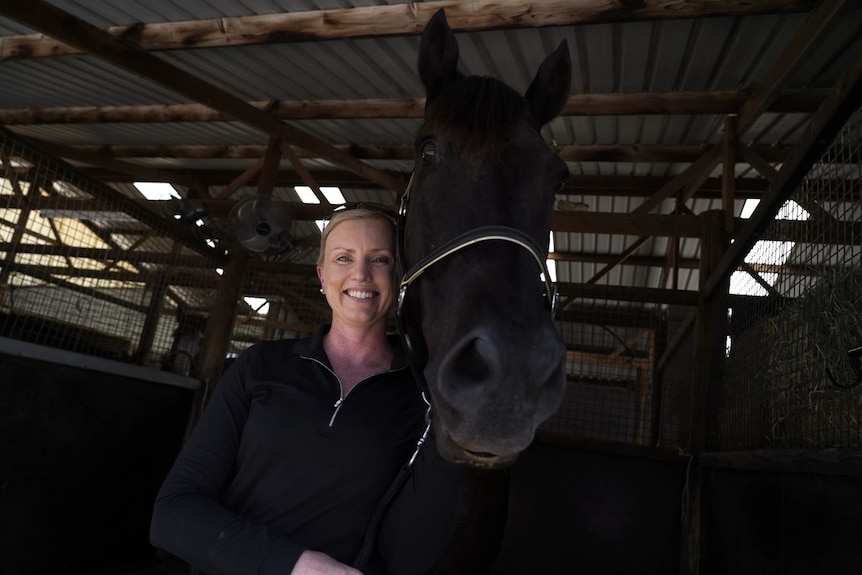 Sergeant Michelle Blaney only became a Mountie this year after 15 years as a detective and has forged a trusted bond with Troop Horse Kokoda.(ABC News: Steve Cavenagh)

"We were walking down the footpath and the next minute we're in the middle of a lane. Lucky the cars have seen us having a bit of an issue and stopped,'' she said.

At times she misses working as a detective but "nothing compares to being in the QPMU".

"The community is a lot more engaging with us on the horses. A lot more willing to interact and form those relationships with police that often have a lasting effect on people," she said.

"Even if people hate police, they generally love animals."