What is behind Warsaw's activity in the confrontation with Moscow

Poland decided to expel 45 Russian diplomats from its territory. By itself, this step did not become a bolt from the blue, but the moment for it was chosen, obviously, not by chance. Already on March 24, a summit of NATO member countries is scheduled in Brussels. Warsaw is expected to raise the issue of its proposed possible sending of an alliance “peacekeeping” mission to Ukraine. The corresponding initiative, as expected, was not supported by other members of the bloc, but it is clear that Poland will not reduce activity on the Russian-Ukrainian flank. We figured out what is behind Warsaw's ambitions and how it can influence NATO. 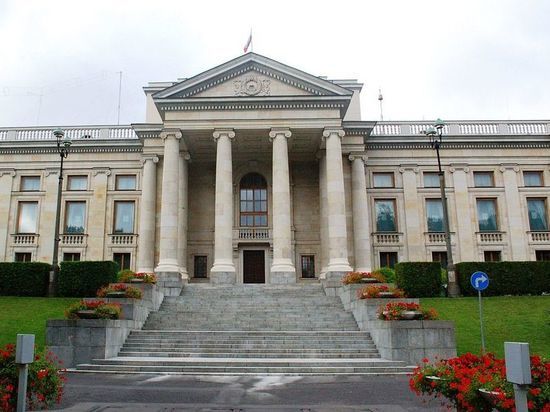 According to Polish media, shortly before the decision to expel Russian diplomats from Poland, Russian Ambassador to the country Sergei Andreev was summoned to the local Foreign Ministry. In total, four representative offices of Russia operate on Polish territory: the embassy in Warsaw (102 people, including members of the families of employees), as well as three less numerous consulates – in Gdansk, Krakow and Poznan. Under these conditions, the expulsion of 45 persons is a very serious step.

The Russian side promised that it would take retaliatory measures on the expulsion of diplomats on the principle of reciprocity.

At the same time, as the historian, political scientist and leading expert of the Russian Institute for Strategic Studies (RISI) Oleg Nemensky noted in a conversation with MK, Warsaw's demarche will not affect the current situation in any way.

“Repeated statements by Polish Prime Minister Mateusz Morawiecki made it clear that Warsaw is determined to reduce diplomatic contacts with Moscow as much as possible. If this does not lead to a break in diplomatic relations, then it will definitely freeze them (although they are already fairly “frozen”),” the expert emphasized. – Poland did not expel Russian representatives immediately after the start of the special operation in Ukraine, but it was clear that such measures were being prepared. Warsaw already endured a very long pause, obviously, to sort out the situation.”

If Warsaw's activity in the diplomatic field is quite predictable, then its plans to resolve the Ukrainian crisis “on the ground” are much more intriguing. It is known that Poland has already tried to provide direct military support to Ukraine (passing it off, however, as indirect assistance). In particular, the Polish leadership offered to transfer two dozen of its MiG-29 fighters to the American base in Germany, so that the planes would go from there to Ukrainian territory. Washington, however, took these plans with skepticism, to put it mildly, saying that the implementation of such a scenario is only fraught with an escalation of the conflict. As a result, the issue discussed during the recent visit to the Polish capital of US Vice President Kamala Harris, hung in the air.

However, in Warsaw, despite the fact that they were “passed back” on this initiative, they found a new option for helping Kiev – in sending a “peacekeeping” contingent to Ukraine under the auspices of NATO. The Polish partners in the North Atlantic Alliance, as expected, reacted critically to this idea as well. Their reasons are clear: sending, albeit formally, a “peacekeeping” mission from a military bloc (even the option with “blue helmets” seems more realistic, but Moscow would have vetoed such a decision in the UN Security Council) will de facto mean direct interference in the course of a Russian special operation, and how the result is a direct conflict with the Russian Federation.

The scale and radical nature of Polish initiatives will obviously become a complicating factor during the meeting of NATO partners. By the way, Ukrainian President Volodymyr Zelensky, who had previously expressed disappointment in the position of the alliance, will also take part in it via video link. However, he may well support Warsaw's proposals. The question is what goals Poland itself is pursuing under the pretext of supporting Ukraine.

In this regard, Oleg Nemensky notes that the Polish side has always claimed to be the main author of the European and, in general, Euro-Atlantic policy towards the western part of the post-Soviet space.

“First of all, we are talking, of course, about Ukraine and Belarus, but this also applies to Russia. Warsaw sees the role of the ideologist of relations between the Russian Federation and the collective West. Moreover, we can say that this is a historical tradition, originating in the 16th century, and now it is a deeply thought-out political course, the expert emphasized. – At the same time, the Polish approach in relations with Russia is always the most controversial, Warsaw's interest is to prevent Moscow from rapprochement with Europe, and to fully use the confrontation between Russia and the West in its own interests. At the same time, Poland considered it possible, and is now pursuing at the European level, the idea of ​​a special attitude towards Ukraine, which differs from the generally accepted among Western European partners, that it is necessary to seriously think about its integration into Euro-Atlantic structures, the EU and NATO.”

Warsaw and Kyiv are connected by a rather long history of the Polish presence on Ukrainian territory, the expert also recalled, and this directly affects the domestic situation in Poland.

“What is happening in Ukraine is an extremely sensitive moment for Poland, so Warsaw’s policy in the Ukrainian direction is of great electoral importance,” says Oleg Nemensky. – The country's authorities are trying to show maximum radicalism in order to demonstrate their historical patriotism. If we imagine that under the conditions of Russia's special operation in Ukraine, the Polish leadership will step aside, local public opinion will regard this as a historical defeat for the country. The population itself demands intervention in the situation from the leadership.”

The history of Polish-Ukrainian relations also gives rise to speculation that Poland is trying to return the lands that were under its control before the Second World War. However, Oleg Nemensky said, this is unlikely: “They like to talk a lot about Warsaw’s territorial ambitions, but in fact, with the exception of some far-right marginal groups, no one in Poland raises the question of the possibility of revising state borders. In addition, the Poles treat the Ukrainians rather badly. Now the problem with the influx of refugees has already arisen, and the Polish society will not want to annex a region with several million inhabitants. Yes, the Poles have great nostalgia, primarily for Lviv, but there is also a very clear understanding that the accession to Poland of a large region inhabited by other people will only lead to the weakening of their own state. Therefore, we are only talking about spreading influence over certain territories and their maximum distance from Russia.”

In addition to the historical burden and, it would be appropriate to say, resentment towards the Russian Federation, the Polish position is also influenced by its perception by partners.

“Poland is a medium-sized state, but actively claims to be considered as a serious European power. Now, after Brexit (the UK's exit from the European Union), it is one of the five leading EU states. But at the same time, neither Germany, nor France, nor even Italy conducts a dialogue on an equal footing with it, the expert emphasized. “Therefore, Polish political thought is looking for ways to strengthen and strengthen the country. And the recipe in this context is quite clear – it is regional integration around Poland. In this regard, Warsaw is already implementing a number of projects to unite the countries of Central Europe, and, in addition, it is strategically aimed at joining the region of Ukraine and Belarus.

As for the rejection of Warsaw's ideas by other EU members and NATO, then Poland still retains leverage to at least indirectly influence their position.

“There are opportunities for pressure (on the European Union and the North Atlantic Alliance). Poland positions itself as the main EU expert on Russia and Eastern Europe, claiming to know these countries better than anyone else. At the expert level, this is true in many respects. If we look at the composition of the expert community of the main European, NATO and purely American analytical structures, we will see that a significant proportion are either Poles or students of Polish professors (mainly from emigration). So the intellectual influence of Poland on the formation of the lines of Western policy in the Russian and Ukrainian directions is actually very great,” concluded Oleg Nemensky.