Exclusion of Hungary from the EU: Orban prepared punishment

The recent victory in the parliamentary elections in Hungary by the ruling party, which left Prime Minister Viktor Orban in his post, as well as Budapest's reserved stance towards Moscow , again provokes speculation that the Hungarian partners in the European Union can exclude the country from the association. We found out how real exclusion of Hungary from the EU is. 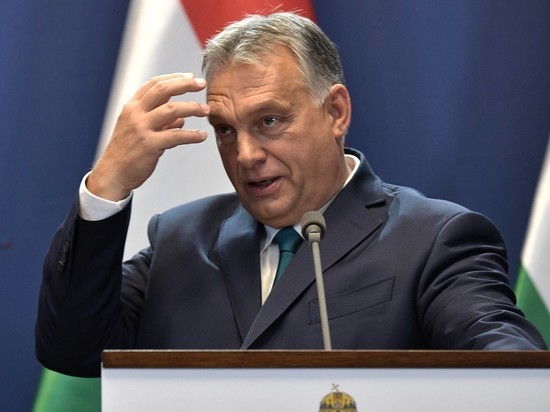 Failing to agree, as planned in the first half of April, a general embargo on Russian energy carriers, the European Union decided to “hit the tails”. The European Commission recognized the decree of the President of the Russian Federation on payment for gas supplies in rubles as violating the sanctions regime, although some EU members quite agree with the conversion of funds into Russian currency. Among them is Hungary, where, as a result of recent parliamentary elections, Viktor Orban retained the post of prime minister.

The Hungarian leader is considered to be a “pro-Russian” politician, although he himself frankly stated: in any confrontation, “Hungary is always on the side of Hungary.” By the way, in the Russian expert community, the position of Budapest is perceived more as constructive and pragmatic, rather than openly friendly, which it looks like only in contrast with more radical Western countries.

The reason for dissatisfaction with Hungary in the EU (in a general sense, since the position of each member is still different) lies far beyond the Russian-Ukrainian issues.

Yes, the current demarche of Budapest, with its principled willingness to pay for gas in rubles, is a convenient excuse for attacks on the Hungarian leadership, but there have been enough claims before. A year ago, Hungary became the object of criticism in connection with the introduction of a law banning propaganda of homosexuality among minors. Some analysts noted the similarity of Budapest's policy on this issue with the actions of Moscow, but the problem was not even a ghostly “consolidation” of Hungary and Russia, but that the law contradicted the democratic values ​​of the EU. Then the voices of the opponents of the Hungarian membership in the European Union sounded.

However, there are no mechanisms for complete exclusion from the “common European home”. A state can leave the EU only of its own free will, by launching the appropriate procedure, as the UK did with Brexit. This is spelled out in Article 50 of the Treaty on European Union. In fairness, it should be noted that there were plans to include a clause on “expulsion” from the EU, but they faced a logical contradiction: such a fundamental decision would require the consent of all members, and this, in turn, is impossible without the goodwill of the exiting country.< /p>

Nevertheless, there is the possibility of imposing serious restrictions, both financial and political, on states that violate the legal principles of the EU. Such a scenario is envisaged by Article 7 of the Treaty on European Union.

According to the regulation, the European Council (the EU's highest political body, represented by the heads of state and government) can vote to suspend any membership rights. But the procedure for this is extremely lengthy.

First, in order to declare a violation, at least 1/3 of all member countries or a majority in the European Parliament must agree with such a fact. If this is achieved, then the European Council will need already 4/5 votes in order to demand clarifications from the country under discussion. The third stage is voting taking into account the information received: in order to recognize the violation, the general consent of all members is needed (with the exception of the “accused” state, of course).

Finally, a qualified majority is enough to impose sanctions against the violator (the concept for the EU is also not easy – at least 55% of the votes of member countries, provided that their population is at least 65% of all the inhabitants of the association).

And only after that, the state can be deprived of representation in terms of EU structures, cut off from individual subsidy programs, etc. Restrictions do not apply to visa issues, since they are regulated by other acts, but the affected country will have to fulfill all obligations within the association .

Attempts to apply Article 7 in practice have already been made, and mainly against Hungary, in connection with discrimination against migrants in 2015, and then in 2018 and 2021. But every time at one of the stages there was a failure. In 2017, the mechanism of the seventh article was launched in relation to Poland, but the procedure also ended in vain.

The fact is that a complex and multi-stage voting system is fraught with many opportunities for countries that have fallen under the scope to avoid sanctions. In the EU, there is the concept of a “blocking minority” – these are only four of any states, whose total population is at least 35% of all the inhabitants of the union. In addition, there is the principle of regional solidarity: for example, Hungary opposed the recognition of violations by Poland. Finally, fears of setting a precedent play a role. For the same Warsaw, it is unprofitable to vote for the punishment of Budapest, if only because the Polish leadership itself regularly falls under a barrage of criticism from Brussels and, of course, does not want to become a victim of Article 7 later.

Nevertheless, even if we assume that a possible anti-Hungarian initiative (and it is not even “on the table” yet) will pass all the stages of voting, this is unlikely to force the country to an unauthorized exit from the EU.

Firstly , Orban, who has been in power for a long time, regularly demonstrates that he is not ready to agree on everything with partners in the union, but Hungary's vote is not decisive, and therefore the loss of part of its representation in European bodies is not critical for it.

Secondly, Budapest is financially dependent on Brussels. In the budget plan of the European Union for 2021-2027. the share for Hungary is 36 billion euros, which is equivalent to about 30% of the country's GDP. In 2020, injections from the EU amounted to 10% of the Hungarian budget – also an impressive amount. Therefore, the country cannot afford to be forever cut off from the Brussels tranches.

Thirdly, given the volatile market situation, Budapest can count on their early lifting when restrictions are introduced against it (the European Council has the right to lift sanctions at any time). And this is better than a complete break with the EU, which Brexit also proves: the UK is still recovering from leaving the union, although its economy is much more powerful than the Hungarian one.