‘Exciting opportunity’ for Tasmania to become a Chinese medicine powerhouse

Traditional Chinese medicine has been practised for thousands of years and, as the sector has grown into a $130 billion global industry, Australia could be well-placed to cash in.

Rising demand and strain on the supply of medicinal herbs has created an "exciting opportunity" for farmers, according to Professor Dugald Close from the Tasmanian Institute of Agriculture.

"These traditional herbs have been used for centuries but, of course, we've got major increases in population, particularly in South-East Asia," he said.

"Land is an issue. Traditionally a lot of these herbs were wild harvested. It's not sustainable to do that anymore and so we're cultivating the products."

Professor Close is leading a decade-long research project to establish whether medicinal crops such as ginseng, Chinese bellflower and shiso can be grown in Tasmania.

He was "very excited and hopeful" the project could kickstart another Tasmanian agricultural success story, such as the premium poppy and pyrethrum industries that have emerged in recent decades.

But first, he and his team have to prove that local crops are just as good as those sourced in Asia. At the Forthside Research Farm in Tasmania's fertile north-west, eight traditional Chinese medicine crops are being sown and studied.

It can be a tedious process. To plant red sage, they first had to soak the seeds for two hours in 50-degree-Celsius water to help them germinate.

And even then it did not always happen, farm manager Doug Clark said.

"We don't know a lot about these species. Some of the germination rates are as low as 30 per cent," he said.

"There are certain actives in the roots the researchers are trying to identify, but for us it's a matter of trying to grow the plant." At several stages in the growth cycle, the roots are harvested and taken to the Tasmanian Institute of Agriculture's laboratory in Hobart for testing.

The shape, smell and chemical composition are all key determinants of quality.

But Tasmania also has several factors in its favour.

The cool conditions, long summer days and the big difference in day and night-time temperatures are all believed to be responsible for the high bioactive qualities found in other specialty crops grown in Tasmania, such as those used to produce essential oils.

And the state's reputation for high-quality produce in South-East Asia could make it easy to start exporting.

"If it all pays off and if we can actually prove we can grow a specific product well, then it's available and passed on to growers," Mr Clark said.

Just what the doctor ordered 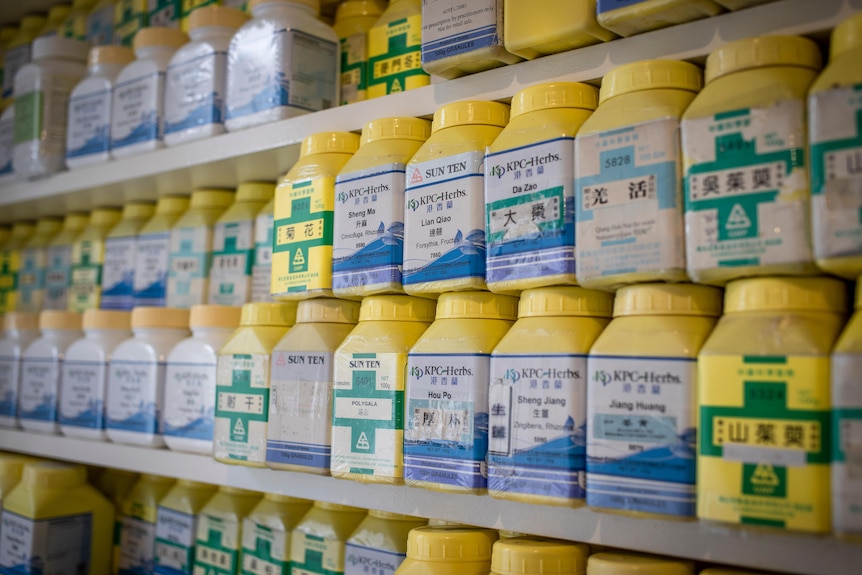 While the researchers are focused on international exports, there are plenty of potential customers closer to home with 4,901 practitioners registered with the Chinese Medicine Board of Australia.

Maria Zong has been dispensing traditional Chinese medicine to patients in Hobart for three decades.

She sources her remedies from a company that imports them from China but that was not always easy.

"Sometimes I order a herb and they say, 'Oh we don't have it, we're still waiting for the shipment'," she said.

"At the moment, I've maybe got four or five different herbs I'm waiting for. Sometimes I need to wait for a month before they come."

Space to play or pause, M to mute, left and right arrows to seek, up and down arrows for volume.WatchDuration: 5 minutes 15 seconds5m Ms Zong was "very excited" about the prospect of local producers.

"If they grow the herbs here, I presume it would be high quality," she said.

"And if we do it locally, it's better for the environment."

Hurdles on the horizon While there is a market for traditional Chinese medicine and indications Tasmania can grow then, one big question is whether local production will be financially viable.

These crops are traditionally harvested by hand and profit margins could be tight given Australia's high labour costs compared to South-East Asia.

Professor Close said they needed to investigate how these crops could fit within Australia's highly industrialised agricultural system.

"And ideally, how they work within rotations of our other major economic crops of interest in Tasmania," he said. Current trade tensions with China could also be a concern, given that is ultimately the biggest market for these productions.

But the Tasmanian Institute of Agriculture remains focused on "long-term gains" and opportunities.

"There's a global marketplace for them so we're not yet focused on any particular market," Professor Close said.

"We'll just see how things roll out over the next few seasons."