Bounty Killer Gets Into It With Mr. Vegas & Alkaline Fans On IG

A call from Mr. Vegas promoting unity in dancehall has led to a showdown between himself, Bounty Killer, and fans of Alkaline. For several weeks now, Bounty has been sharing negative remarks about the Vendetta deejay and perpetuating what many have called divisiveness in the Dancehall arena.

So today (May 26), when Vegas made a post calling for the eradication of divisiveness, social media users naturally thought the comments were aimed at Bounty, and many began to tag him in the comment section.

The post from Mr. Vegas featured a collage with deejays Alkaline, Masicka, and Skillibeng. Vegas captioned the photo, “When you remove the names, you see 3 brothers! 3 kings! 3 is infinite! Hate is a disease! Love is winning! It’s a new day! Eradicate divisiveness!”

The message was welcomed by Vegas’ followers, many of whom began to express their support for the statement in his comment section.

One fan said, “This is what unity is about I like it Vegas. How can some artist say they love the music, but fighting another artist who is doing the same music and expect the music itself to grow. Artist not supposed to be putting other artist against each other too much division.”

But things took a turn for the worst when a fan of Alkaline commented on the post, tagging Bounty Killer. The fan said, “Thank God Vegas, yuh nuh think the way @grunggaadzilla think.”

Vegas responded to the comment saying, “Keep praying. Love will win,” but Bounty’s response was not as nice.

Bounty Killer quickly responded, saying, “Some fish cyaah post ntn about themselves bcuz nobody nuh waah hear bout dem why not post a artiste that has no buzz or unknown neva but is bcuz dem few ya has a fan base fish a try capitalize… post a nobody who really needs the highlight nuh Usher Dem Out.” 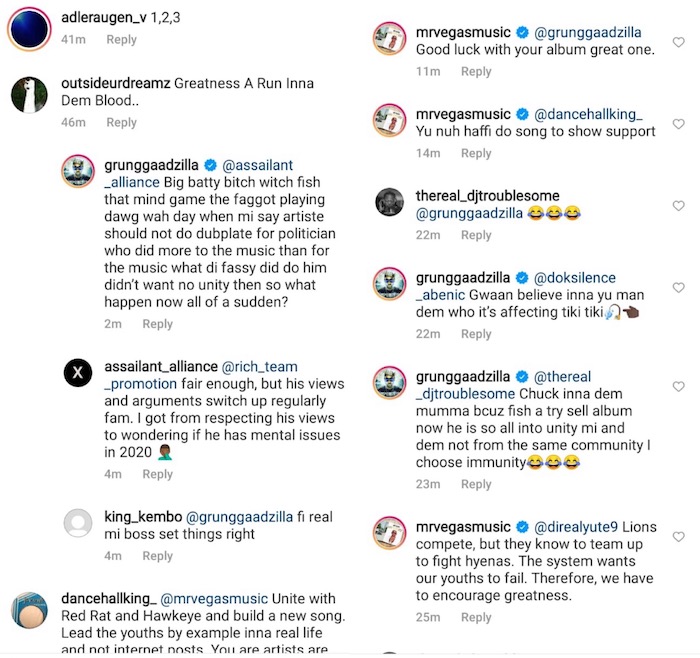 In response to a fan who said Vegas’ views switched up on the regular, Bounty said, “Big b***y b*tch witch fish that mind game the fa***t playing Dawg wah day when mi say artiste should not do dubplate for politician who did more to the music than for the music what the fassy did do him didn’t want no unity then so what happen now all of a sudden?”

Another fan expressed their distaste for Bounty Killer’s views while simultaneously commending Mr. Vegas, “Mi wish @grunggaadzilla could look at this business the way u are looking at it dancehall would be better and it would be a great example set fi di youths of Jamaica that unity is a mighty strength and division is weakness.well done @mrvegasmusic.” 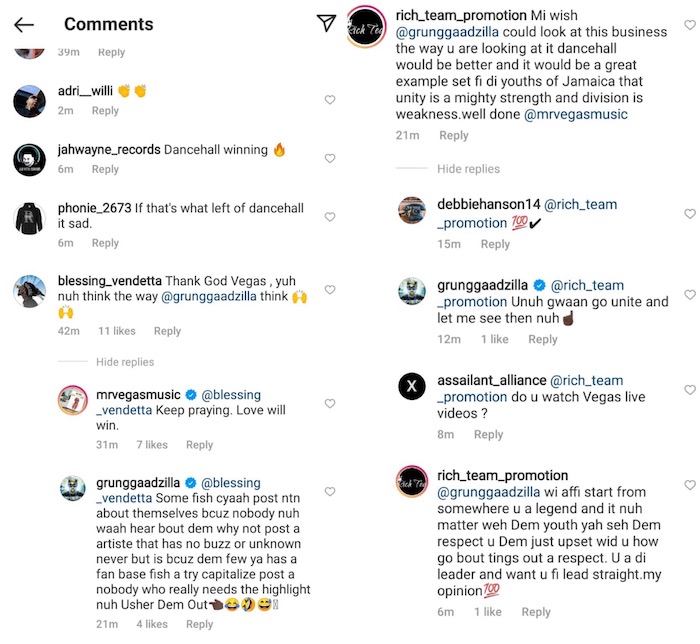 To this Bounty chided, “Unuh gwaan go unite and let me see then nuh. Go ahead gwaan start nuh what u waiting for me to join fi mi gun nuh joing lodge.”

Bounty Killer was still not done, and he went on to accuse Alkaline of seeking relevance for album sales. “Chuck inna dem mumma bcuz fish a try sell album now he is so all into unity mi and dem not from the same community I choose immunity,” he quipped.

In response to Bounty’s tirade against him, Mr. Vegas decided to take the high road. He simply responded, “Good luck with your album great one,” tagging Bounty in his response.

Bounty’s album “King of Kingston” is set to launch sometime this year. In promoting his album, the deejay has thrown shade at other Dancehall artists who released work this year, particularly Alkaline.

As he went back and forth with fans of the “Ocean Wave” singer last week, Bounty said he did not rate Alkaline and that both Koffee and Popcaan were bigger artists. Despite all the shade thrown his way from Bounty, Alkaline has not responded to the comments.

Mr. Vegas’ post has now become a debating ground for Bounty Killer, whose head is now on the chopping block as fans violently lash out against him for his harsh statements.

Mr. Vegas followed up his post with this message possibly directed at Bounty. He shared a quote from Dr. John Henrik Clarke, “I only debate my equals, all others I teach…”