Big hopes for a little bird: Is the orange-bellied parrot coming back from the brink?

Volunteers working to help save the orange-bellied parrot from extinction are eagerly awaiting the first nestlings of the summer.

The critically endangered orange-bellied parrot is one of just three migrating parrot species in the world.

The birds are on average 20 centimetres long and weigh just 45 grams but make the treacherous journey across Bass Strait every year.

They breed at Melaleuca in south-west Tasmania, but spend winters in Victoria, South Australia and New South Wales.

This year, 70 birds have returned to Melaleuca to breed — breaking last year's record of 51 birds.

"That's a recovery in the last five years from a low of 17 birds," wildlife biologist Shannon Troy said.

Of the 70 birds, 36 are female, and 39 are first-year birds that either fledged in the wild or were released from the captive population early this year. There is renewed hope for the survival of the orange-bellied parrot.(Supplied: Mark Holdsworth)

Breeding is now underway, and the first wild eggs of the season were confirmed on December 16.

She said there remained much to be learnt about the parrot. "It's important that we understand what it eats here, what it eats on the mainland, what its patterns of behaviour are, and what we can do to help produce the food that it needs to survive," Ms Ley said.

Threats to the parrot's survival include predators and competitors, invasive species and habitat loss.

Changed fire regimes have also led to a reduction in food availability in south-west Tasmania.

"We were discussing future cold burns in the Melaleuca area to bring back the type of plants that are small, woodland daisies that give the bird some other opportunities at a different time of year," Ms Ley said.

The Minister also visited the orange-bellied parrot captive breeding centre outside Hobart, where acting senior wildlife officer Michael Domrose has worked for the past four years. Mr Domrose said the number of captive birds had increased from 170 to 304 in that time.

"It's of course very different from working in a zoo environment where you want to get close to the bird … we try to keep our birds as wild as they can be, so we have minimal contact," Mr Domrose said.

"They are usually quite nice and timid, they are flock birds, they get along with each other on most occasions.

"The parents sometimes throw some curve balls at us when we're trying to breed their nestlings, but I guess we have that with every species. Some of them might not be the very best parents, we might have to intervene, but on most occasions, they do quite well." The birds are fed a mixture of pellets, seeds and grains, as well as a green mix of vegetables and fruit.

"We also try to give them native [grass] species … but also weeds; they really love weeds like dock," Mr Domrose said.

Some of the captive-bred birds are released as adults, but the program also releases fledglings. Up to 50 fledglings are expected this summer, and will be released from January to March into the wild population. Dr Troy said the captive-bred birds have continued to play an important role in the wild population's recovery.

"At the point that we were at 17 birds [in the wild], there were only four females. We were able to release an additional number of … birds into the wild to allow more pairs to breed and produce young. The orange-bellied parrot is one of just three migratory parrots in the world.(ABC News: Loretta Lohberger)

"We've continued doing releases in spring every year. We also release captive-bred juveniles at the end of the season to increase the size of the migrating flock," she said.

"The captive-bred birds are breeding as successfully as wild-born birds at Melaleuca, so we know if we release them they will breed.

There is also a captive breeding program in Victoria. The captive-bred birds there are released into good habitat to act as a cue for migrating birds to find places to feed when they reach Victoria.

An updated national recovery plan for the orange-bellied parrot is being developed and is expected to be released next year for expert and public comment.

"The future's bright for the orange-bellied parrot, but only when we have many shoulders to the wheel to make it so," Ms Ley said. 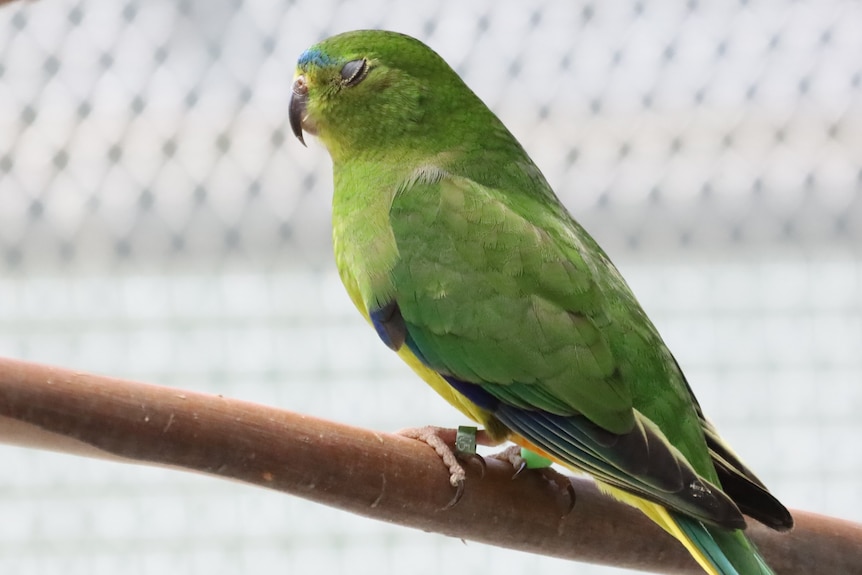